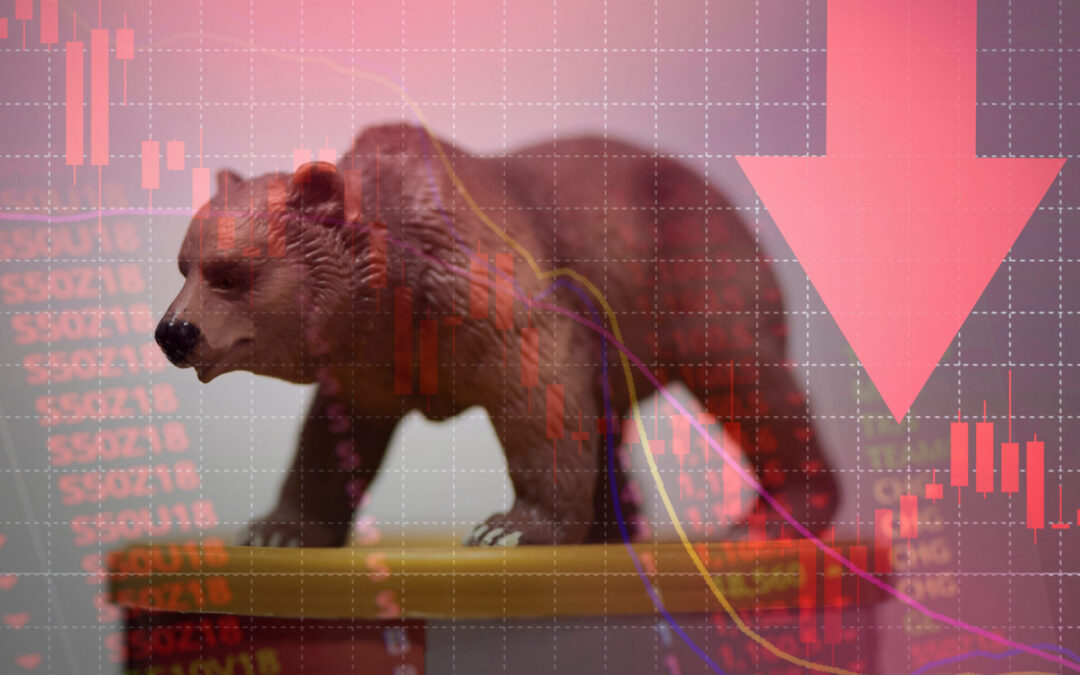 With all the ongoing dips and drops in the market, are we just experiencing a little turbulence—or is there a giant hungry bear out there waiting to strike?

Did that scare you? Probably not…

But for some people, the idea of a bear—either the actual animal or a bear market—sneaking up on them is pretty terrifying.

With the way the market has been acting over the past few months—and especially the last week—many people on Wall Street are starting to wonder if there’s a bear market just around the corner, waiting to pounce.

But how do we even KNOW that we’re dealing with a bear? What if it’s just the grumblings of an indecisive market?

And more importantly, what do we do if a bear does show up?

There are a few ways to deal with a bear…the animal, not the market

However, if you’re confronted with a panda bear, sit down and enjoy because they’re rarely dangerous to humans and are incredibly fun to watch.

Is There A Bear Market Coming?

Now, the way to deal with a bear market is very different from how we deal with a bull—but a simple shift in strategy can mean the difference between wallowing and thriving during a bear.

Diversification, long-term plays, and investing in sectors that do well in downturns—such as banking or utilities—are just three of the keys to surviving a “bear attack.”

However, I’ll repeat my earlier question: how do we know we’re even DEALING with a bear?

How can we differentiate between a dip, a drop, or a full-on bear market?

Well, I’ll give you three identifiers that can let us know if the recent drops that have happened recently were just temporary drops or the bear announcing its arrival.

First, one of the things to look at is how the Federal Reserve is reacting to the markets.

One of the biggest reasons that markets tank is because the Fed raises interest rates too high for investors’ liking. Higher rates make borrowing less attractive and really take a bite out of corporate earnings—and after keeping short rates near zero for the past seven years, the Fed recently hinted that it will start raising the rates by summer of 2022.

However, that estimation came BEFORE Fed Chairman Jerome Powell said that persisting inflation (at a whopping 6.2% in October) may nudge the central bank to act sooner and clamp down harder.

Not A Bear Yet… But Close

The second strategy is to look at valuation.

An overvalued market is one of the biggest traps for investors, and we know whether a market is overvalued by examining the price-to-earnings ratio (or P/E)—and we’ve been redlining for a while now.

For example, the historical P/E average for the S&P is about 15, and markets naturally like to revert back to their average.

And finally, the last thing we want to look for is whether the yield curve is inverted.

What is the yield curve? This is where the interest rate for Treasury bills works with shorter being highest and longest being lower. If the yield curve is inverted, that means that the longer-term bills are HIGHER than the shorter term.

When investors sense a bear, they’ll start buying 10-year bonds up like hotcakes, which increases their price and lowers the yield, hence the “inverted” yield curve.

The yield curve has inverted before EVERY recession for the last 50 years – and has only been wrong ONCE. Right now, the gap between two- and ten-year bonds is NARROWING – yet another sign that a bear is living in our proverbial woods.

These indicators let us know that the bear is probably coming…

And by the direction of these three indicators, it’s easy to see why some investors see a bear on the horizon.

However, there’s no need to panic.

Remember, we have some time to prepare—and more importantly, there are PLENTY of opportunities to profit in bear if you know where to look.

So, don’t be scared…

People and markets alike have survived bears for a very long time—and we will too.

“Information is not knowledge. The only source of knowledge is experience. You need experience to gain wisdom.” – Albert Einstein