Home » Money Moves » Why Are Cryptos Being Banned Around The World?

Why Are Cryptos Being Banned Around The World? 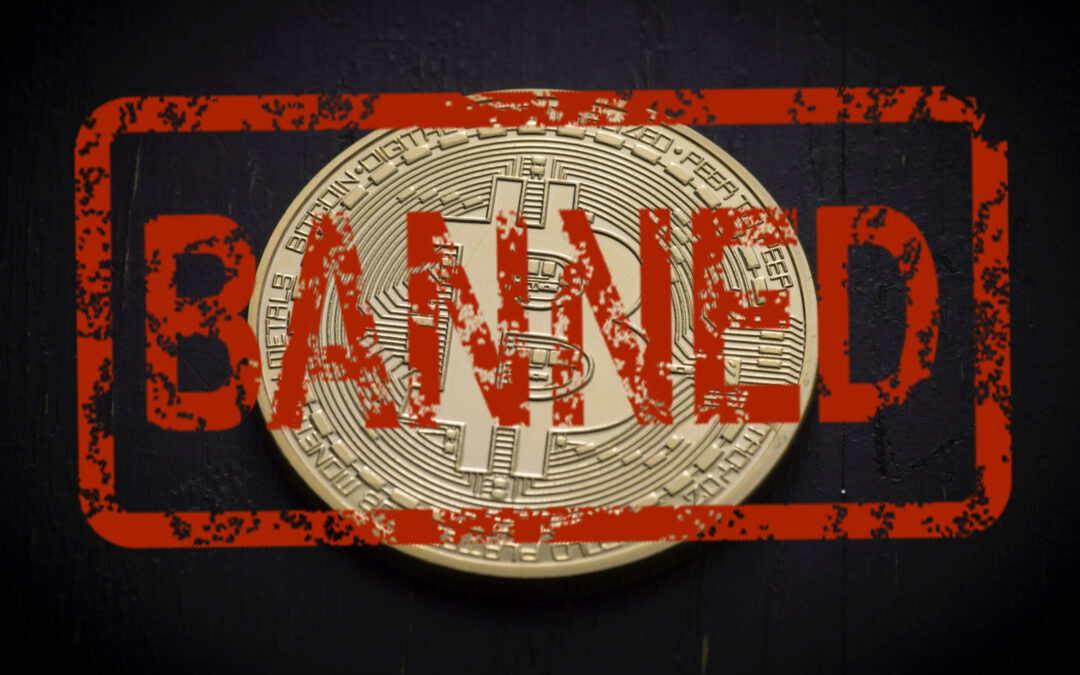 Cryptocurrencies are the future – yet there are some countries limiting their use or, worse, banning them outright. What are these governments so afraid of?

I’m not a big fan of “banning” things.

I think human adults should have the autonomy and common sense to choose between right and wrong, and if they can’t figure out the difference, then that’s on them.

Simply put, I believe in freedom. Not anarchial freedom, but freedom to be allowed to do what I want and live as I see fit so long as it doesn’t hurt other people.

It’s why I have a HUGE problem with overbearing HOAs.

In my old neighborhood, I had to have the color I wanted to paint my house approved by the committee, and that just seemed like overkill to me.

It’s MY house! If I wanted to paint it rainbow zebra stripes, then I should be able to paint it that way.

I’d never do that, but I should still have the freedom to make my own decisions with my own stuff.

So, I’m not a fan of bans…even when the thing in question is something I don’t like.

However, I’m not the king of the world.

I’m just a guy that knows a thing or two about the financial world, so what I think doesn’t really get taken into consideration by world governments.

Where Crypto Is Getting Banned

However, the concept really doesn’t make sense to me, which is why I was shocked to learn that cryptocurrencies are outright BANNED in nine countries and severely limited in a lot more.

Now, I’m sure there’s some kind of loophole allowing government officials to hold crypto (because there’s always a loophole for that), but the regular people of these countries cannot invest, use, or sell cryptos in any way, shape, or form.

However, while banning is terrible, other countries severely limiting what citizens can do with these DeFi tools is just as harmful.

Forty-two other countries, including Bahrain and Bolivia, have all-but-banned digital currencies by putting restrictions on the ability for banks to deal with crypto, or prohibiting cryptocurrency exchanges, according to a 2021 summary report by the Law Library of Congress.

What’s scary is that the number of countries that have either banned crypto or severely limited it use has more than doubled since 2018.

That means it’s not getting better…it’s getting worse.

Why Cryptos Are Getting Banned

But what are these governments so afraid of?

Why can’t they trust their citizens to trade in decentralized currency like Bitcoin, Ethereum, or any other coin out there?

Well, it seems that some governments that have banned crypto believe that cryptocurrencies are being used to funnel money to illegal sources and argued that the rise of crypto could destabilize their financial systems.

What starts with crypto could easily end in a coup, in their eyes.

That’s absolutely ridiculous, but it’s a fear that’s contagious, and now a growing number of countries are moving towards trying to stop the rise of DeFi.

Now, while it’s true that not all governments are moving to ban cryptos, even pro-crypto nations are looking into regulating digital currency, including India and the US.

Gary Gensler, the chairman of the SEC, has called crypto “the Wild West,” saying he wants to impose more regulation on digital currencies and even hiring a senior adviser specializing in cryptos… all of which means that a crackdown is coming.

Luckily for us, we’ve got some key politicians that realize that cryptos are important specifically because they’re not regulated.

They’re free, which means they’re free from the watchful eye of Big Brother.

Hopefully, we can avoid a ban or restriction here in the US.

But you can bet that if more money starts funneling towards cryptos instead of stocks, somebody will put the screws to some politician to push restrictions, if not outright bans.

Like alcohol in the 20s, cryptos are on their way if we’re not careful.

Pay attention to your politicians and what they’re pushing.

If they’re not pushing freedom, then you’re backing the wrong guy. Keep that in mind going forward.

“There is no evidence to show that prohibition has ever had its intended impact. Of course, just as banning beef has reduced beef consumption, banning alcohol will lead to reduced alcohol consumption. But, there appears to be little or no correlation between, say, domestic violence or household impoverishment and prohibition.” – Vikram Patel