Home » News Updates » Bonner: A Fit of Collective Insanity and a Moment of Silence for Paul Volcker

Bonner: A Fit of Collective Insanity and a Moment of Silence for Paul Volcker 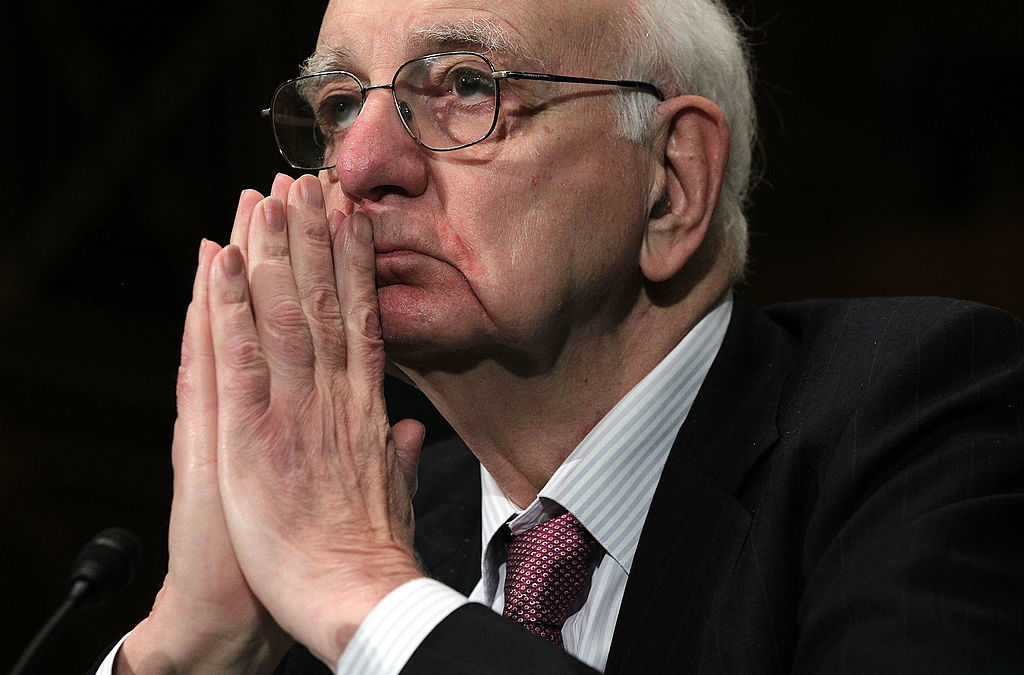 In the meantime, U.S. markets got a jolt of joy juice on Friday. Widely reported was a “blowout jobs report” that showed the economy is “still strong.”

If that weren’t enough, the Trump administration said the trade talks were back on track.

That was all investors needed. The Dow rose 337 points.

Donald J. Trump picked up the “blowout” theme too:

This is a blowout. Look at these manufacturing numbers, a blowout.

Nobody mentioned the fact that most of the jobs were not in manufacturing … and even the smallish boost in November came from an end to the GM strike, not robust growth in the manufacturing sector.

Nor did anyone want to spoil the party by recalling that unemployment is not a leading indicator.

Companies make their hiring decisions months before the new employees reach the payroll. Employment is always high … just before a recession.

Then, when sales sag and profits disappear, companies do not immediately jettison their employees; they reduce the number of hours worked … waiting to see how bad things will get before they take more drastic action.

Which is exactly what they seem to be doing now. If you look at “hours worked” instead of the number of employees, you see the same softening trend we see just about everywhere else.

Monday morning brought news of the biggest bankruptcy ever in the trucking industry. Celadon is off the road. As posted by Arnold and Itkin trial lawyers:

This weekend, noted trucking company Celadon shut down its operations in preparation for an imminent bankruptcy. Unfortunately, the company didn’t warn its 3,000 drivers across North America. As a result, there are hundreds of truckers left stranded with no way of delivering their loads and no sure way to get rid of their rigs. Celadon has not provided drivers with fare for bus, rail, or air travel home.

Celadon’s bankruptcy was first reported on December 6, when it was revealed that the company defaulted on its loans and couldn’t find additional financing.

Remember, you can goose up a stock market with funny money; but if the goods aren’t moving, you don’t have a genuine boom. And when a recession approaches, the orders slow … and the trucks idle.

We reported last week that the U.S. trade deficit is falling … but for the wrong reasons.

Americans just aren’t buying as much from overseas. And the stuff they don’t buy isn’t making its way onto trucks and trains … which leaves dockworkers, stevedores and truckers with time on their hands.

You can see that by looking at how long employees spend on the job each week. The figures are now negative — with falling hours of work for trade, transportation, utilities and warehousing workers — just as they were on the approach to the last major crisis in 2007.

In other words, the blowout employment numbers are more of a reflection of the past than the future. And they’re typical of a late stage boom.

But the longer it takes the boom to end … the more people begin to think it is eternal. Then, they try to explain it, looking at warts and scars … and taking them for beauty marks.

Now that the world is deep in negative rates, for example, the world’s thinkers are busily thinking about why negative rates are not grotesque … but attractive.

As for debt, the more the merrier; it can help heal the sick, feed the poor … and buy a new aircraft carrier!

Gilder wrote one of the best books on money ever published, The Scandal of Money. And Pooley and Tupy developed the “time price” analysis, which helps us understand what is really going on. As Gilder put it:

But now, they are on the other side of the aisle. And it’s an important aisle …

On one side are those who believe it is a Brave New World, made great by advances in technology and expertise.

On the other, where your editor sits … lonely as a cloud … are those who think it’s really the same old world, in which we humans fall into sin and error on a more-or-less regular basis … and are subject to fits of collective insanity from time to time.

Which puts us at odds with almost all academic economists, central bankers, government policy makers … and just about everyone else.

They all think the government needs to spend more money to “stimulate” the economy … to boost “demand” … or simply to create more consumer price inflation.

“Forget the debt,” they say … “That’s your grandfather’s worry, not ours.”

They all think we really have entered a great and glorious New Era. Have we?

Are our central bankers wiser than ever before? Have we nothing more to fear than fear-mongering itself? Are technology and innovation going to save us from our record debts … and help our economy grow so fast that even negative rates will seem generous?