Home » Chart of the Day » Weak U.S. Dollar Is Great for President Trump

The U.S. dollar showed strength to start the week.

The dollar tends to go up when the news is bad. Traders call it a flight-to-safety trade.

Using traditional analysis, there are a number of reasons to expect dollar strength. And the dollar rose according to news reports, reaching “an almost six-week high … as investors sought safety and global stock markets tumbled on fears about rising COVID-19 cases and uncertainty surrounding November’s U.S. elections.”

The chart below shows that the dollar has been in a trading range. It recently moved toward the top of that range: 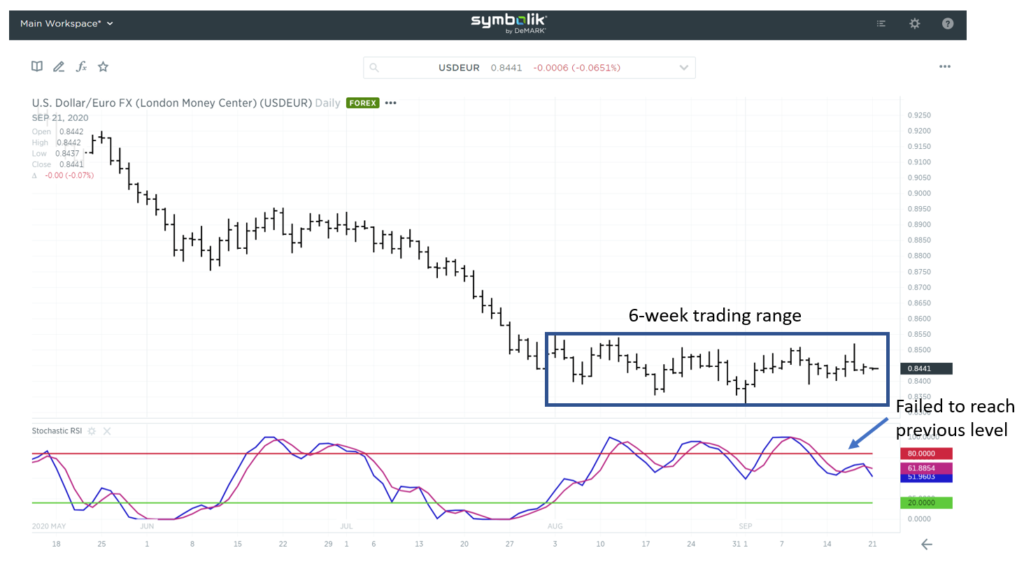 The current price level has served as resistance in the past. And it could attract sellers this time. This is a bearish signal, despite the possibility of the flight-to-safety trade.

The momentum indicator at the bottom of the chart confirms a bearish outlook.

This popular indicator is known as the stochastic relative strength index (RSI). The RSI alone rarely provides actionable trading signals because it’s calculated in a way that keeps its value in the neutral range most of the time.

To address that, the RSI is used to calculate stochastics, another popular momentum indicator.

The stochastic RSI in the chart above failed to reach a new high as the dollar moved up. This is a bearish divergence in the indicator and indicates a down move in price is likely.

This is good news for President Donald Trump. In the past, when the U.S. dollar is weak heading into the election, the incumbent party won the election. A weak dollar helps keep prices of imports down, which means lower energy prices and happier voters.

The dollar could reverse course in November, after the results of the election are known. Until then, it is likely to remain in its trading range.

Homebuilding Slowdown Could Cripple the Economy