Home » Chart of the Day » Biden May Be Obama 2.0 — Check This Economic Indicator

Biden May Be Obama 2.0 — Check This Economic Indicator

Consumer confidence depends on a variety of factors, the clearest of which is the president’s attitude.

This doesn’t mean that the president deserves all of the credit or blame for the economy; his policies can influence employment, inflation and other economic data.

But the president’s most important role may be in how he uses the “bully pulpit.”

That term dates back to the early 1900s when President Theodore Roosevelt began referring to the presidency as a bully pulpit. He meant that press coverage offered him an unparalleled position to advocate for his policies. At the time, the word “bully” was synonymous with “wonderful” or “terrific.”

His distant cousin, Franklin Delano Roosevelt, would use the bully pulpit to rally the country during the Great Depression and in World War II. Later, John F. Kennedy used his bully pulpit to push the Apollo program.

There are also less inspired examples. Jimmy Carter is associated with saying the nation was in the grip of a malaise. Barack Obama was associated with managing the decline of America’s global power.

The chart below shows consumer confidence tends to move within ranges during presidential administrations. 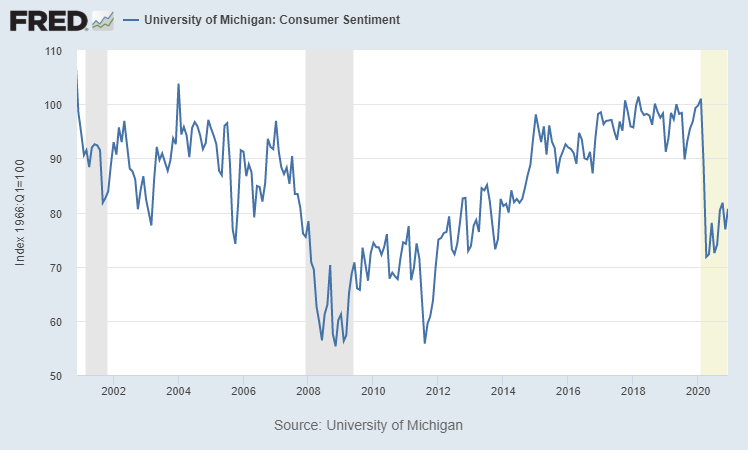 From 2000 until the beginning of the recession in 2008, consumer confidence measured by the University of Michigan in a monthly survey was consistently high. The range from 2008 to 2016 was consistently lower than the range seen during the Bush administration.

During President Trump’s term, confidence was generally in a consistent and narrow range, well above the average seen during President Obama’s years.

One explanation for the difference was the tone of comments from the bully pulpit. A president who is optimistic increases confidence.

Thus far, the Biden administration has worked to lower expectations. This is true regarding the economy and public health, which could lead to consumer confidence below the range seen in the Trump or Bush years.

Low confidence can weigh on stock market returns. This won’t always be the case, but investors must watch the White House for signs of weakness that could roil markets.