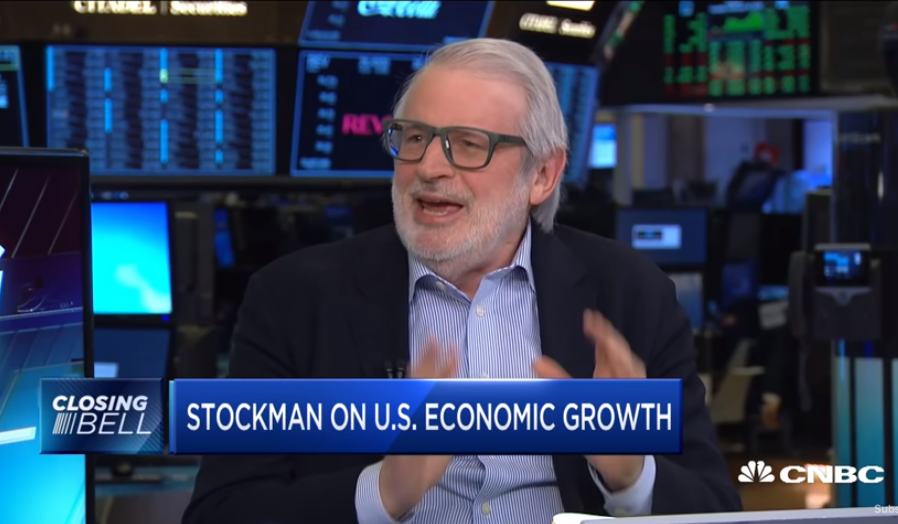 Former Ronald Reagan budget director David Stockman appeared on a recent podcast on SBTV where he lambasted the Federal Reserve and said it’s long past time for Congress to wake up and stop giving so much power to a group of unelected officials.

Stockman started out blasting the Fed for lowering interest rates for the first time in more than a decade this past July, calling it cowardly capitulation to Wall Street and pressure from the White House.

“This rate cut was an act of colossal stupidity and cowardice. It was a capitulation to the bully in the Oval Office and the crybabies and gamblers on Wall Street who can never get enough sugar from the Fed,” he said. “But let’s look at the underlying case: There was no economic case for it whatsoever. Supposedly, we’re at a 50-year low for unemployment, we’re a 20-year high on consumer confidence. The GDP is growing at least modestly in the 2-to-3-percent range.

“This is not an economy that needs stimulus 121 months into an expansion. We’re at a record. Now, what we do need is honest financial asset prices and interest rates that makes sense. We haven’t had them for the last decade or longer and now the Fed, after a tiny effort to normalize rates, has reversed course and is marching right back into what I call sub-zero insanity.”

Stockman went on to blast President Donald Trump’s economic acumen, repeating what he said in a story we covered previously, but adding that it ultimately isn’t Trump’s fault for wanting cheaper money: All blame goes on the central bank cabal.

“Trump is a complete ignoramus when it comes to monetary policy. As far as he’s concerned, let’s not have any interest rates at all. Let’s just make them zero and let everyone borrow until their heart’s content,” Stockman said. “That’s how he ran his life as a real estate developer for 40 years — the cheaper the interest rates, the more money he could borrow. So he has no idea what he’s talking about, but it’s not just Trump.

“The Fed, though, their problem is that it is so caught up in its own groupthink and the delusion that … it is actually managing the U.S. economy, that by … small changes in the interest rates, 25 basis points, from this ultra-low level that we’re at today, that they can affect the inflation rate or the growth rate or the course of the economy — they can’t.”

They can’t because it is a global economy, Stockman said.

“It’s $80 trillion worth of goods and services being pushed and pulled all around the planet. Inflation is on a global basis, not on a domestic basis,” he said. “So the whole idea of what I call ‘Kingsman monetary central planning,’ where you have one $20 trillion economy and if you have a valve called the interest rate that you can dial up or dial down and make the inflation rate come off the second decimal point, it’s crazy as hell.

“And yet, that’s what they think they’re doing. They can’t even see that they’re waving their arms like a windmill and it’s not making any difference. That’s the problem today — central bank run amok. Central banking controlled by a small posse of unelected academics and political hacks who somehow, one, believe they’re running the national and global economy and second, have no checks and balances.”

The solution, Stockman said, is for Congress to come to its senses and end the Fed.

“So even though I think that Trump is totally wrong … anyone who attacks the Fed for whatever reason, I’m totally for it because it’s an illegitimate, dangerous institution that needs to have its credibility so undermined that finally the political authority — Congress — wakes up says we have delegated open-ended power to … 12 people who are wrecking everything. They’re killing savings, wage workers, they’re creating a massive windfall of profits on Wall Street for speculators and traders. This isn’t the route to prosperity or for a stronger economy; this is the route to a disaster.”

Click here to listen to the near-40-minute podcast in full.

Discussed in this interview: