Brodrick: The One Gold Chart You Need to See Right Now

Last week, gold prices broke out of a trading range that previously held the yellow metal in check. President Donald Trump got the credit, as he’d said he didn’t mind if a trade deal with China waited until after the 2020 election.

This worried the market, and impacted stocks and metals. But there’s something that has a much bigger impact on gold than what President Trump does or doesn’t say.

First, let’s start with the fact that the Fed is pumping cash into the money markets like it’s a fix of high-speed chicken feed. It is increasing the amount of short-term cash loans it is offering banks to ensure U.S. interest rates remain stable.

To put it bluntly, the Fed wants to keep rates nice and low.

To do that, the Fed now plans to offer $25 billion in cash loans for the 28-day period ended Jan. 6, up from $15 billion previously.

Meanwhile, the Federal Reserve Bank of New York is pumping masive liquidity into the system, adding $97.9 billion in temporary liquidity on Monday alone. In total, the New York Fed has pumped nearly $3 trillion into the money markets in just over two months.

All this when we AREN’T having a crisis. Supposedly, anyway.

Why do it then? They say they want to make sure there is plenty of liquidity in the system.

But it has a side effect. It pushes rates on Treasuries lower. Way lower.

Now, I have to explain something else: The “real interest rate.” You take the 10-year Treasury rate and subtract the Consumer Price Index (CPI).

When the 10-year rate is lower than the CPI, you get a negative real interest rate. And that is what we are seeing on the chart below, along with the price of gold. 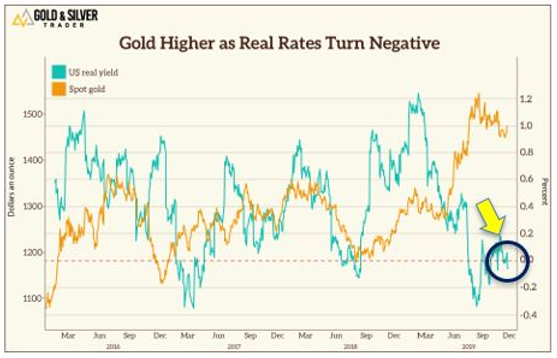 I’ve circled where the real interest rate is dipping below zero. In other words, holding the 10-year Treasury is a money-losing proposition for investors.

If that doesn’t impress you, this was also the start of a 79% move to the upside in gold miners.

Why? Because miners are leveraged to the underlying metal. As gold moves higher, miners’ profit margins widen and widen.

But now you may be wondering, “WHY is a negative real interest rate good for gold?”

Good question! The answer is that one of the knocks the bears make against gold and silver is that they pay no interest. Well, taking inflation into account, Treasuries don’t, either.

So, what should you be buying? If your answer is gold miners, you are correct.

To be sure, there are other forces pushing gold around. I could mention, for example, that demand for gold from the world’s central banks just hit a new multi-decade record.

According to commodity analyst Matthew Turner, central bank gold purchases totaled 550 metric tons as of October. That’s 17 tons higher than ALL the purchases made in 2018. And 2018 saw the biggest gold buying grab-a-thon in 50 years.

There are other forces lining up for gold, too. I’ve talked about those in previous articles, including this one and this one.

And I’ve talked about ways to play the coming move in gold, including the VanEck Vectors Gold Miners ETF (NYSE: GDX). Which, by the way, just broke its downtrend.

To be sure, individual miners will likely outpace the index in this big, golden bull run. Bank on it!