1 Timely Chart Shows You Where Stocks Are Heading

Earnings for the second quarter of the year are coming in more than 40% below the level reported in the same quarter a year ago. That means already overvalued stocks are getting more overvalued.

Unemployment is high and by some indicators still rising, which means stocks are largely disconnected from the economic news.

Yet stock prices are rising. Without fundamental or economic support, there’s only one explanation.

Investors are buying stocks because they feel more optimistic. You can see this in the Daily News Sentiment Index chart below. 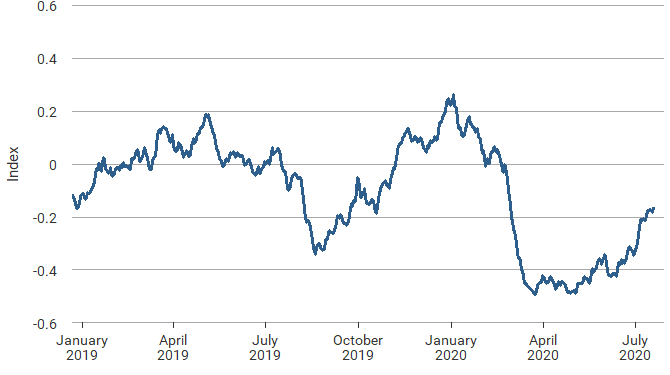 This index is maintained by Federal Reserve economists. It reviews the tone of economic articles appearing in at least one of 16 major U.S. newspapers.

While many investors would argue that they don’t read newspapers, reporters with these papers are often quoted on other news websites. They are also interviewed on television. The stories play a role in shaping public opinion.

Not only do newspapers influence public opinion and sentiment, but they also respond to changes in sentiment. This may be surprising since major publications have political biases that affect their coverage. Their bias doesn’t change. But their headlines do.

Large newspapers are not immune to the laws of economics. Their headlines are designed to encourage clicks. Real-time data shows what readers are clicking.

The Daily Sentiment Index captures changes in how economic news is reported, and it shows a strong correlation to the stock market.

Both stocks and the negative tone of news coverage reversed in March. The index also mirrored last year’s stock market rally and the decline that accompanied global economic shutdowns earlier this year.

Improving sentiment explains why stocks are rallying even though the news is still bad. Investors respond less to news and more to their perception of the news.

This index is updated daily. Watch it to gain timely insights into the stock market.