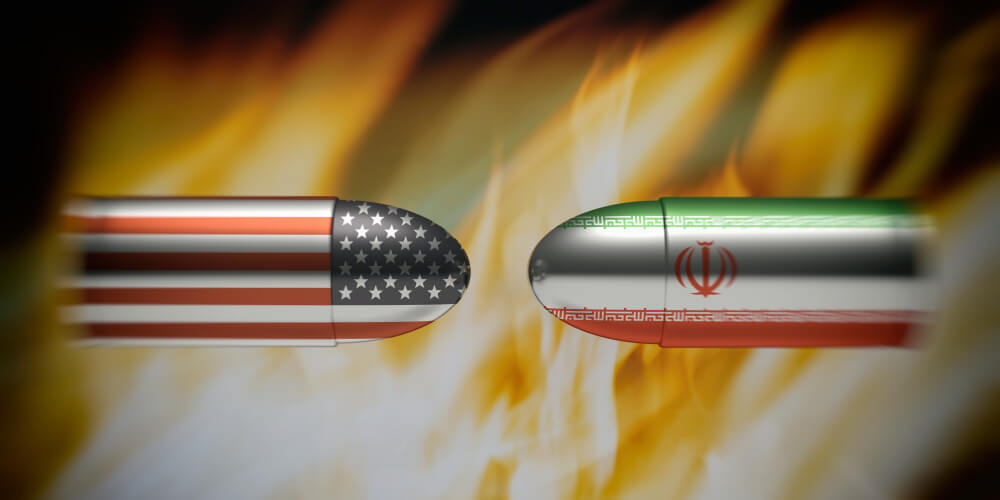 Iran claims to have shot down an American spy drone near the Strait of Hormuz where two tankers were attacked last week, further stoking tensions in the Middle East and sending the price of Brent Crude surging more than 3%.

According to Iranian media, the “spying” Global Hawk drone was shot down near Kuh Mobarak, which is on Iran’s southern coast on the Gulf of Oman.

“We will defend Iran’s airspace and maritime boundaries with all our might,” Supreme National Security Council Secretary General Ali Shamkhani said, according to Iran’s state-run Islamic Students’ News Agency. “It doesn’t matter which country’s aircraft cross our airspace.” 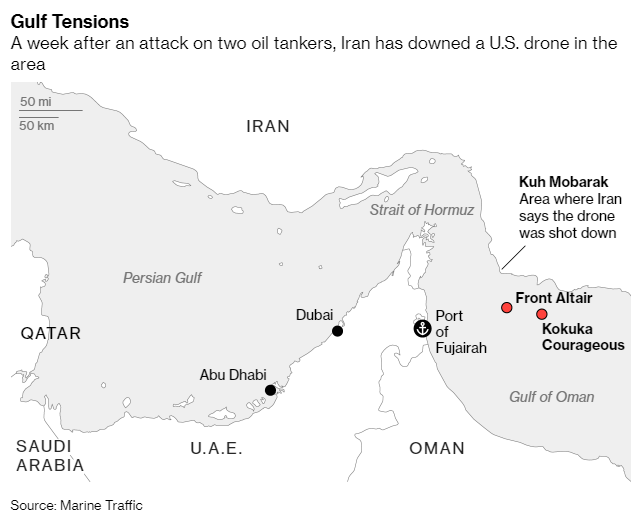 The U.S. claims the drone was flying over international territory near the strait, one of the most important waterways where about one-third of the world’s oil reserves passes through.

“Iranian reports that the aircraft was over Iran are false,” Navy Capt. Bill Urban said. “This was an unprovoked attack on a U.S. surveillance asset in international airspace.”

The new friction in the Middle East comes one week to the day after an attack on two oil tankers just outside the entrance to the Persian Gulf, sending oil prices surging 4.5%. The U.S. blamed Iran, which has denied involvement.

On Monday, Iran warned that it will breach the multilateral nuclear accord signed in 2015 that the U.S. has backed out of by surpassing its agreed to uranium-stockpile limit. Iranian President Hassan Rouhani threatened that a new deal needs to be in place by July 7 or the Islamic Republic will increase its uranium enrichment.

Atomic energy spokesman Behrouz Kamalvandi suggested that Iran’s enrichment could reach up to 20%, just a step away from weapons-grade levels.

“We are seeing an escalation and the frequency of attacks is concerning even though they are still mostly minor,’’ Middle East and North Africa research fellow Renad Mansour said, according to Bloomberg. “People across the region are starting to make preparation for the possibility of a trigger coming from somewhere.’’

U.S. President Donald Trump has been briefed and is “closely monitoring the situation,” according to outgoing Press Secretary Sarah Huckabee Sanders.

Trump weighed in at about 10:15 a.m. on the East Coast Thursday, simply tweeting “Iran made a very big mistake!”

Iran made a very big mistake!

The U.S. tightened sanctions on Tehran in early May, declining to allow anymore waivers for countries to buy Iranian oil. The U.S. also announced it is sending an additional 1,000 troops to the area for defensive purposes.

Brent for August settlement rose $1.63 to $63.45 a barrel on London’s ICE Futures Europe Exchange, with prices closing 0.5% lower at $61.82 on Tuesday. Global benchmark crude traded at $7.73 premium to WTI over the same period.