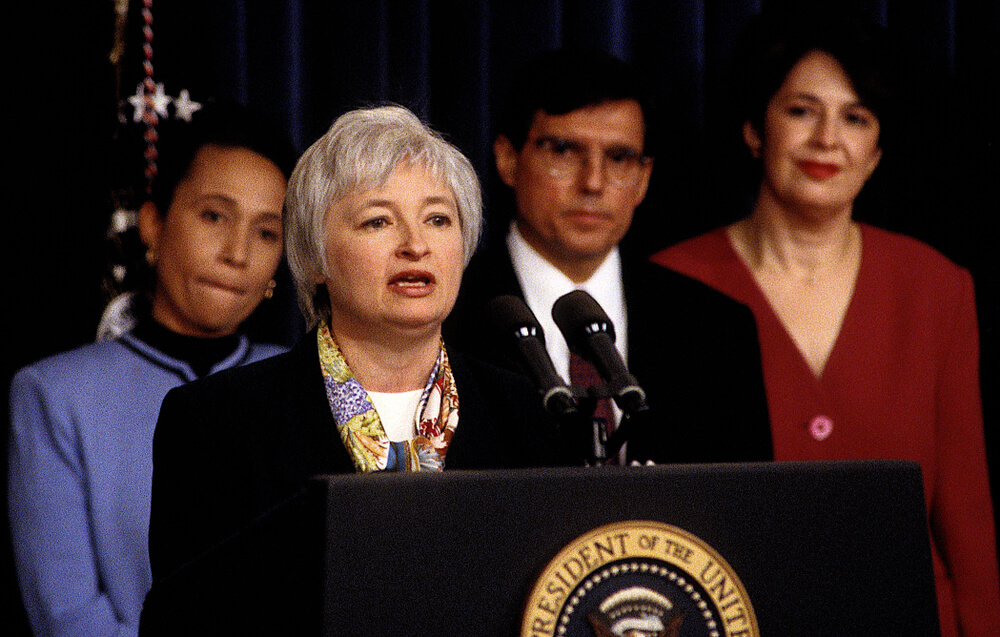 Carried on the back of a strong labor market and consumer confidence, the U.S. economy remains healthy and strong, according to former Federal Reserve Chair and current Brookings Institution economist Janet Yellen.

However, Yellen said, a weak run of business investment, fallout from the trade war between the U.S. and and China and a slowing global economy are the biggest threat to end the record-long streak of growth for the U.S., and could tip the economy into recession.

“There are a lot of recession fears out there. There are reasons to worry, but I think saying the economy is in a good place and is doing fine so far is an important starting point,” Yellen said.

Yellen, speaking at a recent, hour-long interview with Bloomberg’s Kathleen Hays, noted a few strengths of the current economy, including the lowest unemployment rate in 50 years.

“Every firm that has tried to hire workers knows how tough it is to do it. It’s a tough environment for business, but it’s a very good environment for workers,” Yellen said. “Wage increases are not tremendously high by historical standards, but they’ve moved up. And they’ve moved up the most for the least-skilled workers, which is something that — given trends in income inequality in our country — is a very welcome development.”

Yellen also noted how inflation has remained below the Fed’s 2% target for much of the past decade, though, there is reason to believe that number is starting to rise. In addition, both nominal and real interest rates are at low levels.

U.S. economic growth also has slowed but remains healthy, growing at 2.1% in the second quarter, down from the first quarter’s 3.1%. The slowing GDP is being watched closely by financial markets across the planet.

“Frankly, that is something one should have expected, and in a way even welcomed, because if you go back six months and look at the pace of job creation in this country, monthly job increases were running around 200,000,” Yellen said. Job gains over the pasted six months have slowed to about 150,000 per month on average, according to the Bureau of Labor Statistics.

“The unemployment rate was dropping very rapidly, and if that had continued with unemployment at a 50-year low, eventually inflation probably would have risen to unacceptable levels,” Yellen said. “So, the Fed fully expected to see economic growth slow down to a more sustainable trend.”

Yellen also said consumer spending remains strong without the level of unsustainable debt that loomed before the 2008 financial crisis. Retail sales also rose about 0.4% for the month of August.

“Households are basically in healthy shape, and consumer spending is propelling the economy. Fiscal policy (the Tax Cuts and Jobs Act) gave a big boost in 2018 to the economy, and it’s continuing to provide a boost now,” Yellen said.

As far as what could derail the economy, Yellen of course pointed to President Donald Trump’s trade war with China.

“We’re seeing a slowing of growth in China. What’s propelling that? An important factor, not the only factor, is trade policy,” Yellen said. “The uncertainties created by the ups and downs in President Trump’s tariff wars with other countries — that’s having some negative, direct effects on the U.S. economy and on the global economy. But the most important impact around the globe is that it is creating huge uncertainty about what are the rules of the game.”