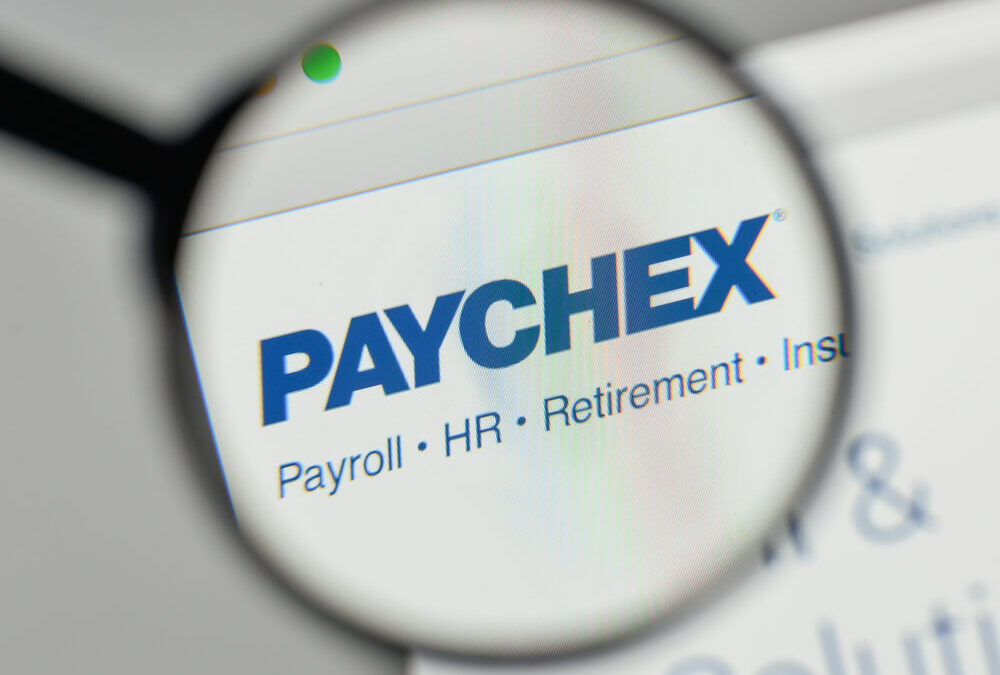 This is a short week on Wall Street.

The market will close at 1 p.m. Eastern time on Thursday for Christmas Eve. It will remain closed on Friday, Christmas Day.

We investors still have events to watch on Wall Street this short week, though:

Despite entering a short trading week, there is one initial public offering (IPO) on the schedule for the week of Christmas.

It will trade on the Nasdaq Global Exchange, under the ticker PHAR.

The Business. The company is a global biopharma company specializing in developing protein replacement therapies for rare diseases.

Its flagship product, Ruconest®, is a plasma-free rhC1NH protein replacement therapy. Its primary function is to combat hereditary angioedema, a rare genetic condition that can cause swelling in the hands, feet, abdomen, face and airway.

The drug is distributed in the U.S., Israel, South Korea, the European Union, Norway, Iceland and Liechtenstein. 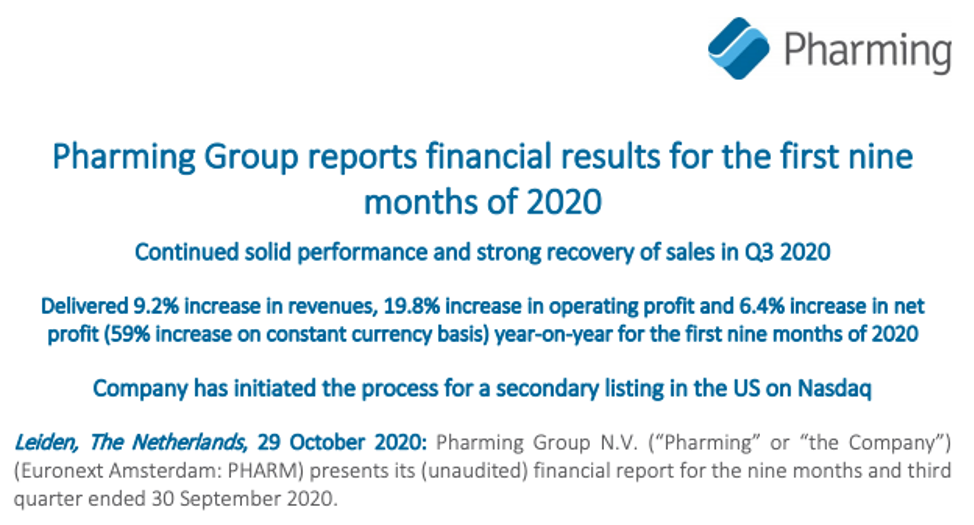 Its gross profit increased by 12% while its operating profit was 19.7% higher than in the same period a year ago.

Pharming Group’s quarter-over-quarter revenues were up 17.3% compared to the second quarter of 2020.

The company’s revenues in the U.S. rose 8% year-on-year.

IPO Terms. We don’t know a whole lot about the IPO just yet.

Pharming Group plans to offer around 899,000 shares at a price of $12.10 per share, according to its F1 filing with the Securities and Exchange Commission.

That puts the offer amount at around $10.8 million.

What to Expect. This is a lucrative time for IPOs. Investors seem to have a big interest in new companies coming to market.

Pharming Group’s secondary IPO would be the fourth biotech/biopharma IPO listed on the market in the last two weeks.

It will be a slow week in terms of earnings on Wall Street this week as the Christmas holiday is upon us.

Only a handful of companies report this week. One of them focuses on providing human resources, payroll, benefits and insurance management software to small and medium-sized businesses.

The company started the year strong. Its first-quarter earnings were $0.97 per share on revenue of $1.14 billion.

However, its revenue has fallen off a bit over the last two quarters.

As you can see in the chart below, its revenue in the second quarter dipped to $915 million, but it rose slightly to $932 million in the third quarter.

The company has a solid track record of beating Wall Street expectations, doing so in nine of the last 10 quarters. 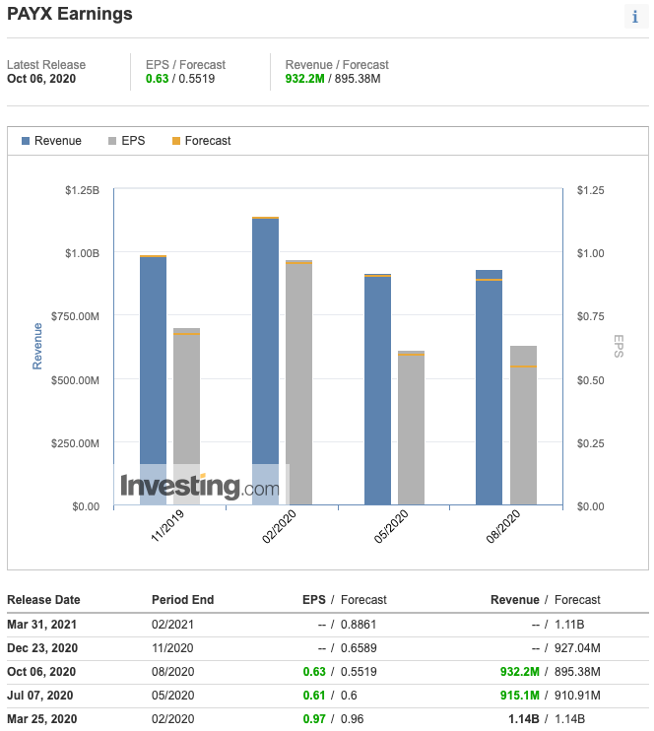 Paychex has also beaten or met revenue expectations in all 10 quarters.

Its stock price has moved steadily upward since falling to new lows in March 2020. 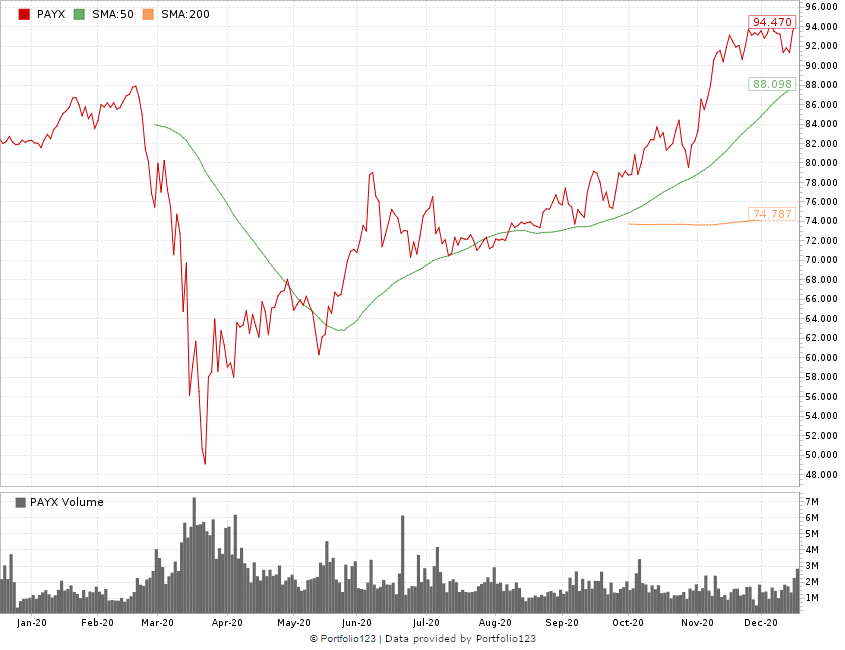 This chart shows Paychex stock has moved 93.3% higher off its March 2020 lows.

The stock price is close to its 52-week high of nearly $95 per share.

In its most recent quarterly report, the company projected fiscal year revenue to decline by 2% to 4%. Its fiscal year ends May 31, 2021. 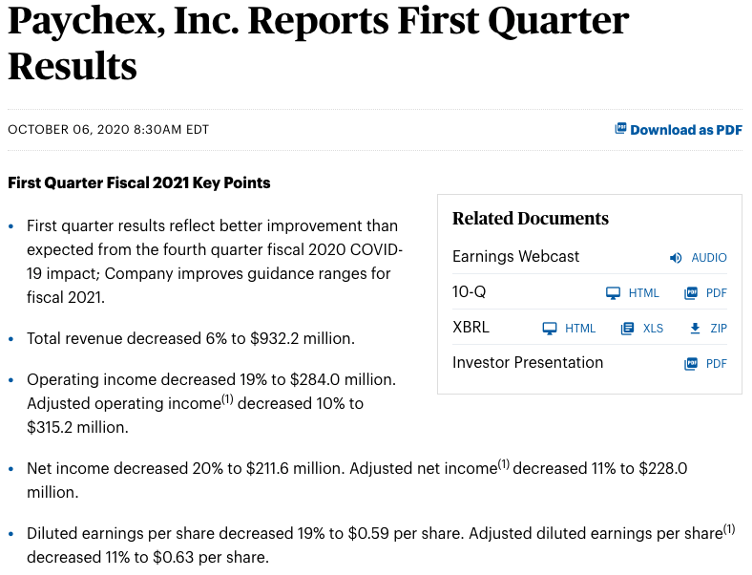 It also projected diluted earnings per share to fall by 6% to 8%.

For the current quarter, Wall Street analysts project Paychex earnings of around $0.66 per share on revenue of $927 million.

I suspect Paychex’s earnings will be right in line with analysts’ expectations this time around.

There could be a slight variation of $0.01 per share in earnings in either direction.

The Federal Reserve Bank of Chicago will present its monthly activity report for the 7th Federal District on Monday.

This report is a key component in tracking the overall economic growth of decline across the country.

In October, the index was 0.83 … a marked improvement from September’s reading of 0.27. This indicated a more bullish, or positive, outlook for the dollar. 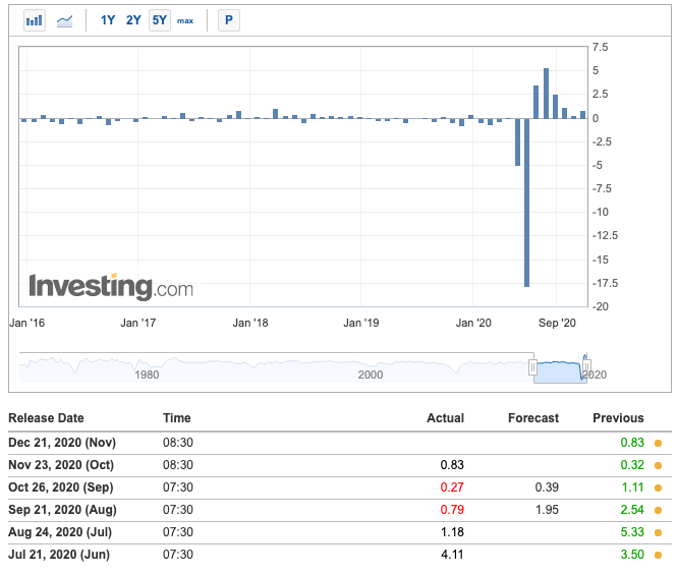 October was a marked improvement from May’s minus-17.5 reading, but considerably lower than July’s reading of 5.3.

Quarterly spending jumped more than 40% in each of the last two quarters after suffering 30% declines in August and September.

October and November spending increases were the largest jumps since December 2015.

The National Association of Realtors will also release its month-over-month existing home sales report on Tuesday.

In October, existing-home sales jumped 4.3% on a month-over-month basis, beating analysts’ expectations of minus-1.2%.

However, analysts are holding to a drop for November, forecasting a 1.2% decline in the sales of existing homes.

Finally, on Wednesday, the Bureau of Economic Analysis will release its month-over-month personal income report for the month of November.

The report shows the change in the total value of income received by consumers.

Personal income dropped 0.7% during the month of October, and analysts are projecting a 0.3% drop for the month of November.

Markets are closed for Christmas. 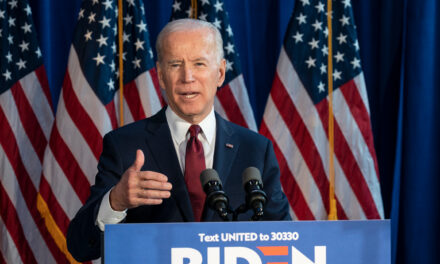 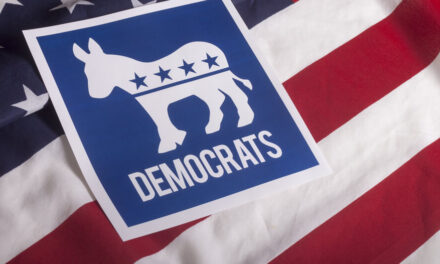 The “Blue Wave” Hit Washington — How to Invest Now