Home » Chart of the Day » 2020’s Crash Was the Fastest Ever. Dismal Numbers Prove it Won’t Be the Shortest

Unprecedented is still a popular word. Almost everything that’s happened in the past couple of months was unprecedented.

Retail sales allow us to quantify how unprecedented this bear market is. The previous record was a 3.9% decline in November 2008. This shutdown is more severe than the 2008 financial crisis that resulted in a 17-month bear market.

In recent weeks, stock markets around the world suffered unprecedented declines. And then, just as quickly, they began to recover.

Investors need to consider whether stock markets can really rebound at an unprecedented rate in the face of so much economic harm.

The table below shows that a bear market takes time to unfold. On average, declines last 12 months. Almost half, six of the 13 declines since the end of World War II, lasted more than a year. The shortest were three-month declines in 1990 and 2018.

The Driving Forces Behind a Bear Market 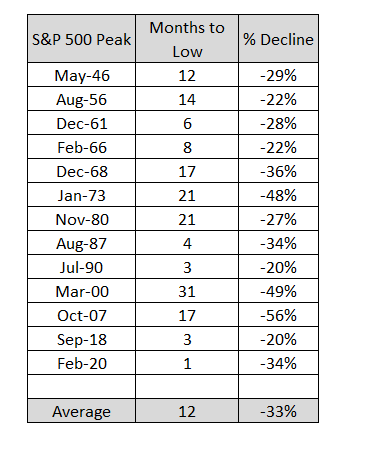 War led to the brief decline in 1990. Saddam Hussein invaded Kuwait in August after massing troops at the border over the summer. Countries around the world joined the United States in condemning the move and formed a coalition to oust Hussein’s forces.  As the world’s response became clear, the stock market recovered.

Tariffs, or the possibility of a trade war, drove the 2018 selloff. Traders sold until it was apparent that trade would continue despite threats.

So far, in 2020, the market’s decline lasted just one month. That would make it the shortest, fastest bear market on record if the March bottom holds.

Looking at the state of the economy rationally, it seems unlikely that bottom can hold.

As states reopen, we will learn many businesses didn’t survive. Shortly after reopening, there will be a second wave of business closings as some discover they can’t turn a profit in the new economy.

The possibility of a second wave of virus infections also hangs over the economy.

The bear market decline in stocks was unprecedented in its speed and recent gains are pricing in a smooth recovery. The economic recovery is likely to be challenging.

Economic problems will drive a second decline in stocks and the 2020 bear market will lose its place as the shortest in history before long.