Home » Stock Market Updates » Denning: Markets Are an Inch From Crisis, Thanks to the Fed

Denning: Markets Are an Inch From Crisis, Thanks to the Fed 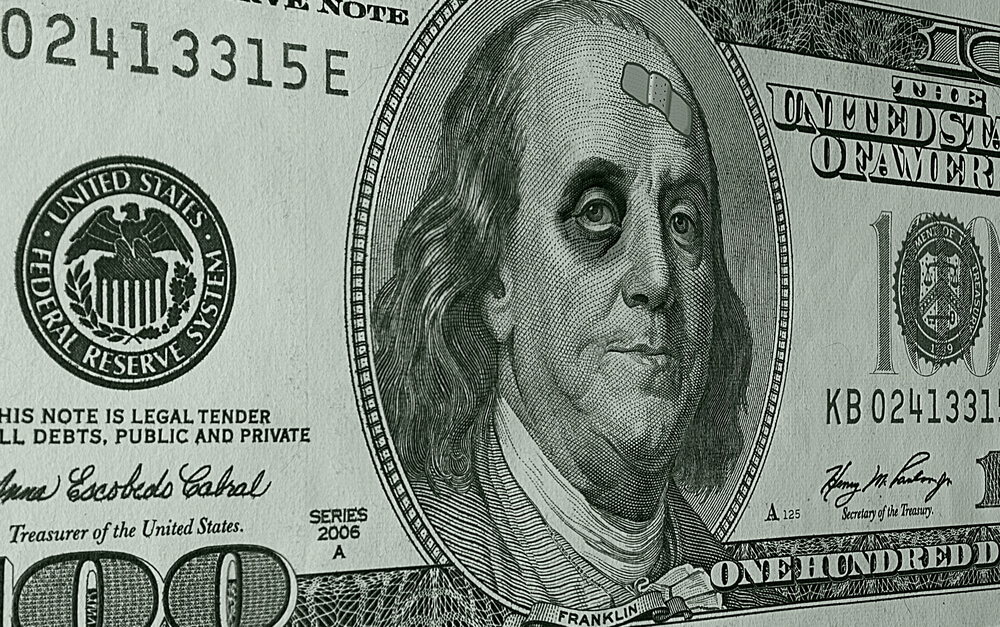 With the stock market pushing new highs, you may be tempted to “pop the champagne corks,” as Dan puts it below. But in this special excerpt from our December issue of the Letter, he shows why the party’s over — despite the Fed’s attempts over the past few months to keep the party going. More importantly, Dan offers some solutions for what to do before the whole thing blows up …

In one mere week of December, the Federal Reserve added $30 billion to its balance sheet while the European Central Bank (ECB) added $12 billion. Global stocks have added $16 trillion in market capitalization this year (so far) and, at $85 trillion in total, are 98% of global GDP.

It’s a financial party the likes of which the world has never seen.

Even the Saudis got in on the act in December. Saudi Aramco finally held its long-awaited coming out party and debuted with a market cap of $2 trillion. (This comes just a year after Apple became the first company to reach a $1 trillion market cap — something that until then had seemed almost unreachable.)

We may get there yet. But the task of today’s essay is not to pop champagne corks and shake a leg on the dance floor.

The task is to connect the dots, try to see the bigger picture, make some sensible forecasts about what’s next and, more importantly, what you should do. But before we get to that, another important item …

Merry Christmas, Happy Hanukkah, and Season’s Greetings from our family to yours. We hope this essay finds you well and happy, wherever you are, and no matter what currency you’re buying your gold in.

Our beat here is money. But we know that the main reason you bother to keep up with investment markets and the financial world at large is so that you can make a better life for you and your family. Money is the means to that end. But it’s the end — a good life and a happy family (as happy as it can be) that matters most.

So here’s wishing you and your family a safe and happy holiday from rainy and cold Baltimore, where Bill and I are huddling to close out the year and plan for the next 10.

The Financial Markets Are Broken

Now, also on the subject of money, it appears that financial markets are fundamentally broken and the authorities at the Federal Reserve have no idea how to fix them. In fact, they’re making it worse.

Since we first wrote to you about the problem with the “plumbing” of the financial system (the overnight “repo,” or lending, markets) the leak has become a torrent.

Check out the table below. 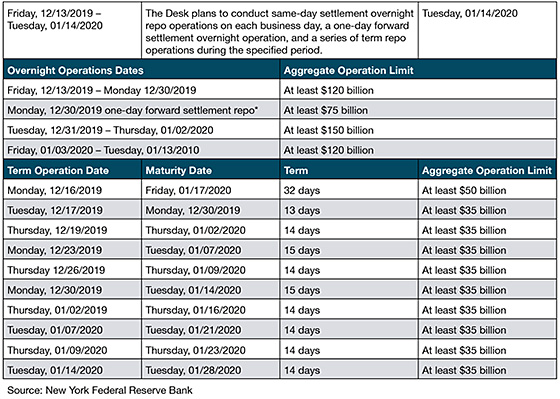 When repo rates spiked in mid-September, it was supposed to be a short-term problem (related to corporate tax payments) with a short-term solution. But what you’ll notice on the table above is that the repo facilities are much larger and last for much longer (13, 14, 15, and 32 days) than normal (overnight). Why?

Because the Fed doesn’t want a system blow-up to end the year. Whether it’s hedge funds or big Wall Street banks, someone needs (or wants) a lot of cash. The Fed is willing to provide it — not least to prevent the unexpected liquidation of a large leveraged player (a bank or a hedge fund). What exactly do I mean?

This is worth untangling because it’s such a critical issue about the health of the economy and a potential crash in the markets. Yet even three months in, no one really seems to have a clear explanation of what’s going on or why. That should be worrying. It is worrying.

To repeat our view: The Fed is running a complicated simulation in which it pumps billions of dollars into the economy in order to levitate asset prices, stimulate consumption and investment and suppress unemployment.

In fact, if we had to make one prediction for 2020, it’s that this unprecedented experiment in central bank intervention will fail massively and take the entire bull market with it. The press conferences, the research reports, the official statements, the tweets. It’s all just window dressing.

In reality, Federal Reserve Chairman Jerome Powell and company are making it up as they go along. This makes the experiment — and the bull market itself — much more fragile than you might think. But what is going on? Let’s take a look …

And because the U.S. government is now running huge deficits, the banks are using their cash to fund U.S. deficits, driving up the overnight price of cash for everyone else. (The Congressional Budget Office reports the Feds ran up a $342 billion deficit in the first two months of fiscal year 2020.)

The Bank of International Settlements weighed in on the story in December. It showed, as you can see in the chart below, that the lion’s share of liquidity in the repo market is provided by just four U.S. banks — JPMorgan, Citibank, Bank of America and Wells Fargo.

That means if those banks make any major change to their reserves — a preference for more cash or a shift toward bonds — it directly affects the reserves available in the system to other players (banks and hedge funds).

The ‘Big Four’ U.S. banks have all the cash in the system 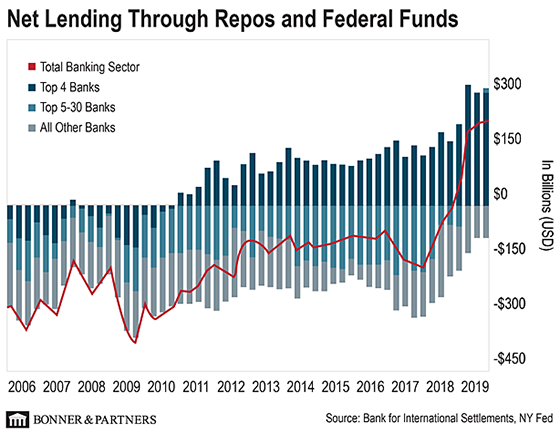 Are you beginning to see how the dots are connected? Or how the dominos might fall? The Fed is providing liquidity to the banks, who are spending their cash on U.S. government bonds.

That kind of crisis feels a lot like Long Term Capital Management (LTCM), which was really when the Fed first got in the business of bailing out Wall Street by opening up the taps. (If you remember, LTCM was a massive hedge fund that almost collapsed in 1998. The Fed stepped in to bail it out on the grounds that LTCM was “too big to fail.”)

The Taps Are Open and Gushing … This Sucker’s Going Down

The taps are open and gushing. The Fed’s pumped $300 billion in liquidity into markets since mid-September. The Fed’s balance sheet is back over $4 trillion. At this rate, the balance sheet will go over $4.5 trillion by May of next year — a new record.

More to the point for investors: The stock market is now directly correlated to, and dependent upon, Fed liquidity. Without more fake money, the simulation ends and this sucker’s going down (obligatory reference to George W. Bush quote during the 2008 crisis).

Now, it’s possible that once banks and hedge funds get through the end of the calendar year, the “problem” goes away. Banks replenish their cash reserves in line with regulatory requirements. Hedge funds roll over leveraged positions without having to engage in panic selling. And the Fed quietly goes about buying all those new Treasury bonds issued by the government (monetizing the debt, as we say).

But my point in belaboring the point is that the financial markets are now thoroughly dependent on the Fed to keep the bull market going. The Dow, the Nasdaq and the S&P 500 are at all-time highs.

But enjoy the merriment of the Christmas holiday while you can. It may not last long into the new year and the new decade.

All Financial Crises Are Born From This

I don’t want to leave you on a dismal note. But I would be doing you a disservice if I didn’t warn you about what Bill and I see in 2020 and beyond.

The point is, at the bottom, all financial crises are born from too much leverage and too much speculation. The 2000 dot-com boom was confined to one sector (technology). Then came the real estate boom, where Alan Greenspan’s emergency interest rates bred an insatiable housing bubble and a Wall Street speculation bonanza.

The response to the 2008 crisis was to double down on the same policies. Endless bailouts, interest rate cuts and now a record intervention in the overnight money markets. Things haven’t improved since 2008. The crisis — like some sort of virus attacking America’s auto-immune system – has simply moved to a new part of the body economy (corporate and government debt).

It’s why, in August, we urged paid-up Bonner-Denning Letter readers to reduce their allocation to bonds and increase their allocation to tangibles and precious metals. With all this going on, that decision seems timely. But it’s not too late to take those precautions if you haven’t yet.

The repo crisis is a “flare up.” The kind of inflammation that could lead to a conflagration. A bonfire of the equities to start. And then bonds later. 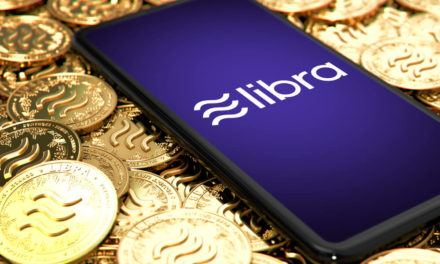 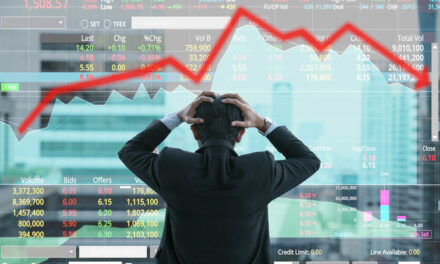