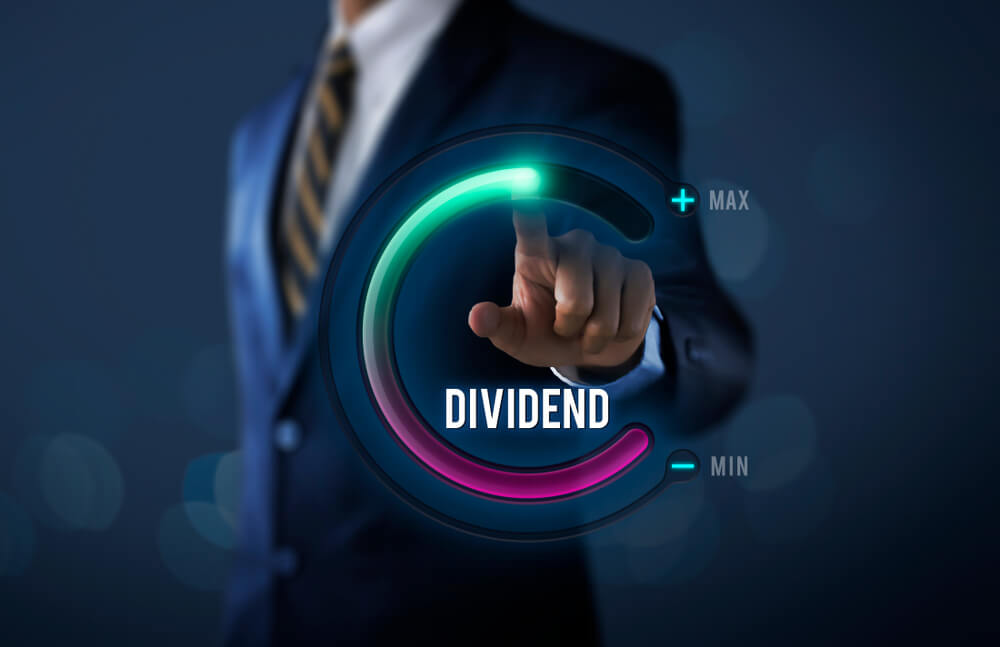 BDCs extend loans to small businesses and often their loans have a “floating rate” component included. So, the BDC tends to make more money as long-term rates rise.

A quick background on BDCs. Since traditional banks have backed off on lending over the years, BDCs have stepped in. They provide much-needed debt, equity and other financial solutions to small businesses.

Congress whipped up business development companies with a few pen strokes in 1980, creating a structure that’s incentivized to provide smaller companies with financing. BDCs receive special tax privileges, and in return, they must return at least 90% of their taxable profits to shareholders as dividends.

If that sounds familiar, that’s because that same trade-off is enjoyed by real estate investment trusts (REITs), which were formed the same way, just 20 years prior.

Just like REITs, the provision that they must dole out 90% of their income as dividends leads to super-sized yields.

In fact, at the moment, BDC yields put REITs — and just about every other asset class under the sun — to shame. 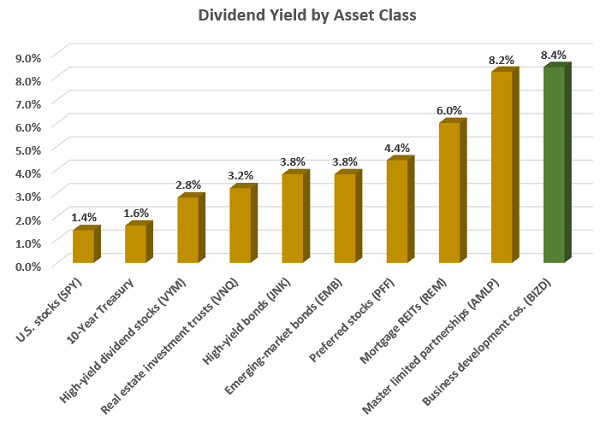 Better yet: Recent research from Raymond James shows that BDCs (and thus, also the small businesses in their portfolios) are starting to bounce back.

Raymond James says that the first quarter of 2021 was a record quarter for BDC net asset values, with NAV per share flat or up for every BDC save one — Sixth Street Specialty (NYSE: TSLX), and that’s only because of a special dividend, not credit issues.

In fact, credit quality “broadly improved across the space,” with non-accruals at cost and at payment-in-kind as a percentage of total investment income both down quarter-over-quarter.

Clearly, BDCs are a place to look for yield with the potential for a growth kicker as the economy continues to find its footing. Of course, there’s no such thing as a free lunch. We can’t bank a 10% yield without risk. Stock-picking in the BDC space was difficult before COVID-19 came into the picture, and most of these companies have only recently recovered to pre-pandemic prices.

The key? Be selective, and know what we’re getting into. We can start by taking a deeper dive into three prime BDCs yielding between 7.4% and 10.7%.

Let’s start with Hercules Capital (NYSE: HTGC), a BDC that not only offers a juicy payout of more than 7% — but does so by allowing us to invest in the cutting edge of technology.

Specifically, HTGC has funded more than 530 companies, including over 190 exits via initial public offerings (IPOs) and mergers and acquisitions, primarily in the tech, life sciences, and sustainable and renewable industries. The firm boasts $11.6 billion in commitments since December 2003, and has $2.6 billion in assets currently under management.

The portfolio currently contains companies such as clinical-stage biotech firm Bicycle Therapeutics, which is seeking out treatments for diseases that are underserved by existing medicines, and local services marketplace and review site Thumbtack. Hercules also is providing funding to a company you’ve surely heard of at this point: Impossible — maker of the Impossible Burger and plant-based meats and cheeses.

Among the reasons to love HTGC are credit quality that’s both at decade-long highs and improving, record-high commitments of $531 million last quarter amid a wider feeding frenzy in venture capital deals, and a recent institutional private credit fund that could provide additional dividend income in roughly two years.

Speaking of the dividend, that 7.4% yield is just a baseline. The company routinely pays special “supplemental” distributions that allow it financial flexibility in case of disaster, which came in handy last year. HTGC currently pays a 32-cent regular quarterly dividend, but is expected to tack on an extra 7 cents per share in supplementals, bringing shareholders up to a 9% annual yield!

And one last kicker? Hercules Capital is an inflation play. You see, 96.8% of the portfolio is floating-rate in nature, which means that it can make more money as long-term rates rise. That sets up HTGC for even more outperformance compared to its BDC peers.

Hercules Showing Some Muscle Coming Out of the Downturn 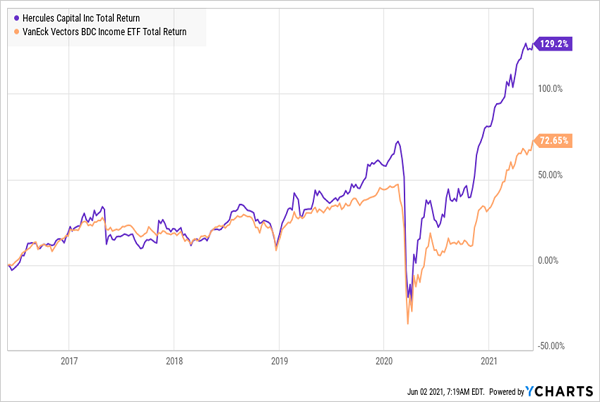 Like with Hercules, a high percentage of FS KKR Capital’s investments (87.4%) are floating-rate in nature, which gives it a natural buffer against the Federal Reserve. Yet despite yielding considerably more than HTGC, this BDC isn’t a slam-dunk.

If you’ll remember, I discussed FSK back in August 2020, and had a pair of warnings about the dividend — one, that the company has cut it multiple times in the past, including a 21% haircut midyear, but also that FSK tends to “tap” its book value to pay dividends, which ultimately hinders performance. So I can’t say I’m surprised to see that this BDC has really only performed in line with its peers since then.

FSK Has Been Mostly Running With the Pack 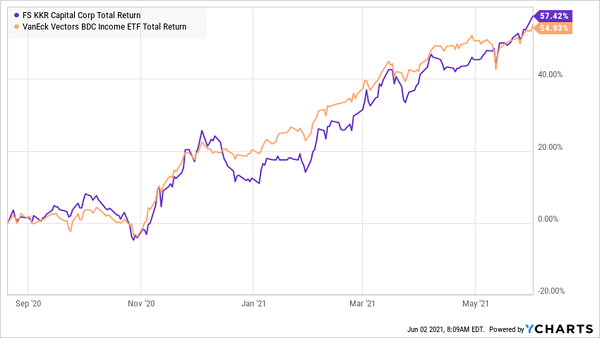 One potential catalyst going forward is a recently approved merger with FS KKR Capital II (NYSE: FSKR), which makes sense for a number of reasons, primarily that they share the same advisor and have similar investment portfolios. The deal should close in mid-June, creating the market’s second-largest BDC and providing both scale and leverage benefits.

Even then, strategists at Keefe, Bruyette & Woods have homed in on a fee change that could hurt shareholders: namely, the removal of FSK’s “lookback” feature, which “aligns incentive fees with credit performance, meaning the external manager only gets paid if credit performance is good.” KBW says this incentive fee has been a significant benefit to shareholders, and that as far as it can recall, this is the first time a BDC with this feature has elected to remove it.

TriplePoint Venture Growth (NYSE: TPVG) is another “externally managed” BDC that invests primarily in secured, growth capital loans. And like Hercules, its sights are set on technology, life sciences and other high-growth categories.

TriplePoint has been about as good as they come, outperforming the VanEck Vectors BDC Income ETF (NYSE: BIZD), as well as the other two BDCs we’ve discussed, over the past five years.

TPVG Has Been a Model BDC 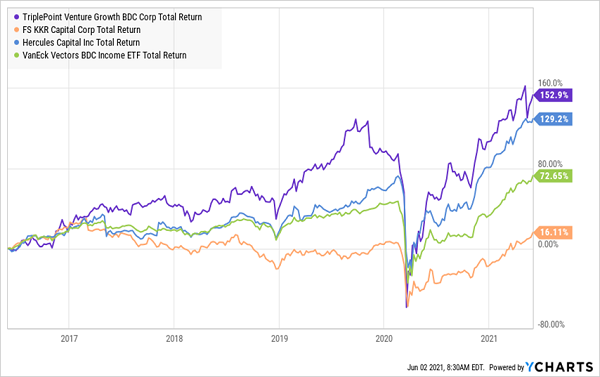 2021 performance has been a little lame, however, with TPVG trailing all of the above. 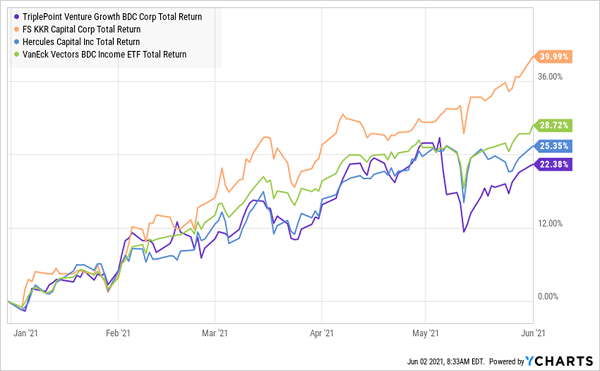 That underperformance is at least easily explained: TriplePoint was hobbled by worse-than-expected NOI reported in May, though the company also announced a slight improvement in book value.

Still, for TPVG’s historical outperformance and mouth-watering 9.2% yield, it’s hard to get excited about its shares right now. The BDC is not nearly as inflation-friendly as HTGC or FSK in that only about half of its portfolio is floating-rate at the moment. Price upside is limited somewhat by valuation, too, with TPVG now trading for 1.2 times book value. 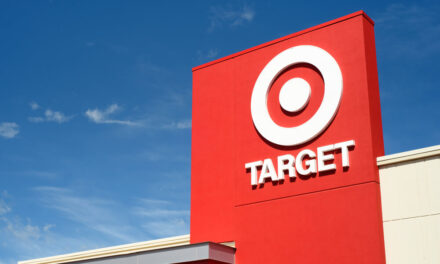 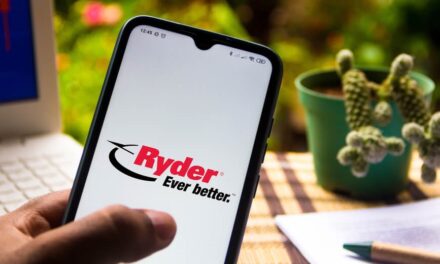