Home » Chart of the Day » This Chart Busts Another Market Myth

This Chart Busts Another Market Myth

Many academic careers are built on an idea that’s simply not true: the efficient market theory.

The idea of the efficient market became popular in the 1960s and is still believed by many in the academic community today.

For investors, efficient markets are a myth. Real-world experience shows that this theory doesn’t apply to stocks.

Recent price action in Biogen Inc. (Nasdaq: BIIB), shown in the chart below, indicates that traders react to news rather than knowing, in advance, how to price the news into the stock. 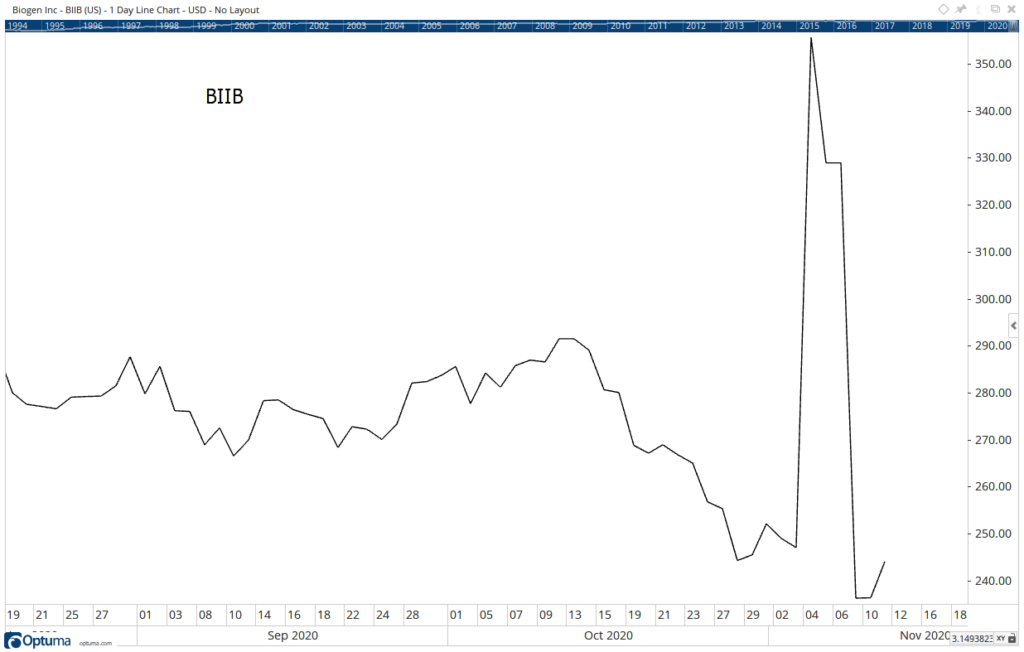 According to academic theory, charts like that can’t exist.

The Efficient Market Hypothesis (EMH) tells us that the current market price reflects all the news about a stock that anyone can know. In other words, the market price is always right.

EMH does a good job explaining why stocks make sharp moves after earnings announcements. Earnings are new information, and traders scramble to incorporate that information into the current price. The result is a gap, and the gap is the starting point for the next trend in the news.

BIIB gapped twice this month as traders reacted to the news and showed that the market could be wrong.

Traders pushed the price up on expectations that the Food and Drug Administration would advance the company’s application for approval of a drug that could treat patients with Alzheimer’s disease. The gain followed the release of internal FDA documents showing a favorable look at test results.

When there was a public meeting about the drug, outside experts “roasted agency reviewers for accepting what, the experts almost unanimously agreed, was unconvincing evidence that the drug … worked.”

The stock sold off, reversing the gain that came less than a week earlier

In a press release following the hearing, Biogen noted the negative votes but indicated it would continue to seek approval to market the drug for Alzheimer’s.

Markets aren’t efficient. They are emotional reactions to the news. Emotions usually give way to logic, so investors don’t need to chase news.

When there is a big jump like the one in BIIB, wait for a pullback. There will almost always be a second chance to get into long-term trends. Waiting avoids disasters like the one we saw in Biogen.

Get Active! Huge Returns Aren’t the Norm Over Time

Individual Investors Turn Bullish: A Bet on the Wrong Side