China’s rapid economic growth created a global power. China moved from a largely agrarian country to a manufacturing juggernaut in a few decades.

The Wall Street Journal dates the beginning of China’s rise to 1978:

The three decades following China’s 1978 “reform and opening” coincided with a massive surge in China’s working-age population, which peaked at more than one billion in 2013—more than three times the size of the entire U.S. at the time.

Connecting that gargantuan pool of youthful strivers to global supply chains not only enabled Chinese factories to undercut other low-value-added manufacturers world-wide but also helped build a deep pool of savings to finance investment.

Now, that virtuous cycle is coming to an end. It could send the economy into a decades-long contraction.

The chart below shows demographic trends in the United States, China and other developing markets.

The pace of China’s reversal is a concern for policymakers and investors. 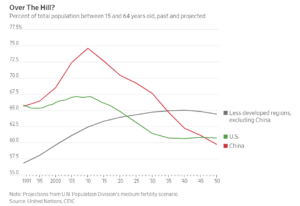 The U.S. faces a similar demographic trend. But technology could offset it. Since the economy doesn’t depend on labor-intensive industry, growth is possible even in the face of a changing workforce.

There is some good news in the chart above.

While the uptrend in less developed regions is not as steep as it was in China in the 1990s, it is the best in the world. On a relative basis, these countries should be the world’s fastest-growing economies.

If you are looking for developing market ETFs, make sure China is not included in the fund.

• Michael Carr is a Chartered Market Technician for Banyan Hill Publishing and the Editor of One Trade, Peak Velocity Trader and Precision Profits. He teaches technical analysis and quantitative technical analysis at New York Institute of Finance. Mr. Carr also is the former editor of the CMT Association newsletter, Technically Speaking.

Congress Did a Good Thing — but Now It’s Trapped