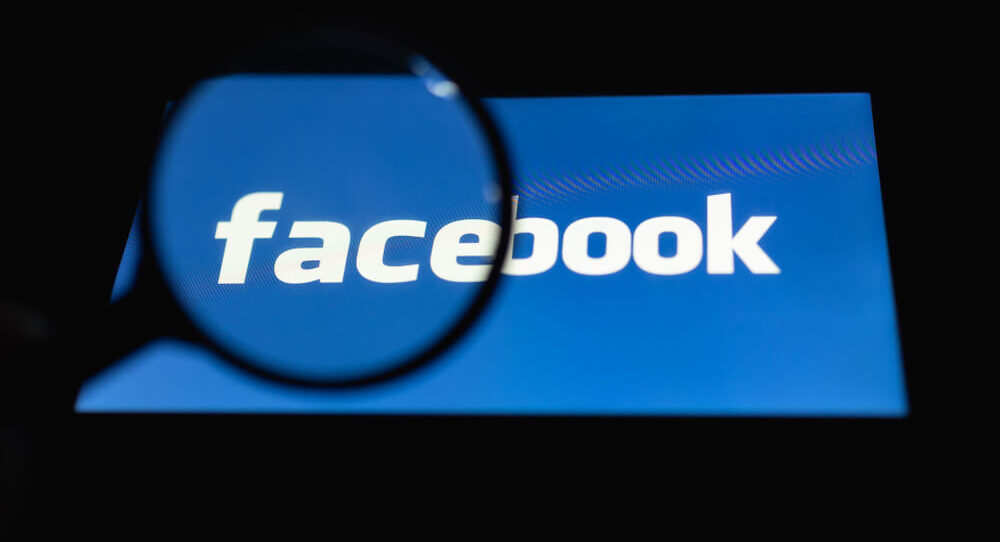 Social media is everywhere. You can’t escape it.

Facebook Inc. (Nasdaq: FB) is still top dog. Almost everyone uses at least one of its products. I’ve sworn off social media, but even I use its WhatsApp service to talk to friends and family in South America.

Facebook has been in the headlines recently, and not in a good way.

In today’s Investing With Charles, research analyst Matt Clark and I take a look at some of these headlines and note striking similarities to an industry that faced headwinds in the ‘90s.

Charles: I’m not a social media addict. I still have LinkedIn, but I got rid of Facebook. And I’ve never been happier. There is life after Facebook.

But I use WhatsApp daily. That’s the primary communication tool in South America. We have friends and family in Peru. In South America, WhatsApp is what you use to communicate. It’s almost impossible to escape the Facebook web.

So the fundamental point here is this company is ubiquitous. It’s hard to function in the modern world without at least one of its products. It’s everywhere, even with all these negative headlines.

Charles: That’s essentially everybody who’s not an infant or in jail. 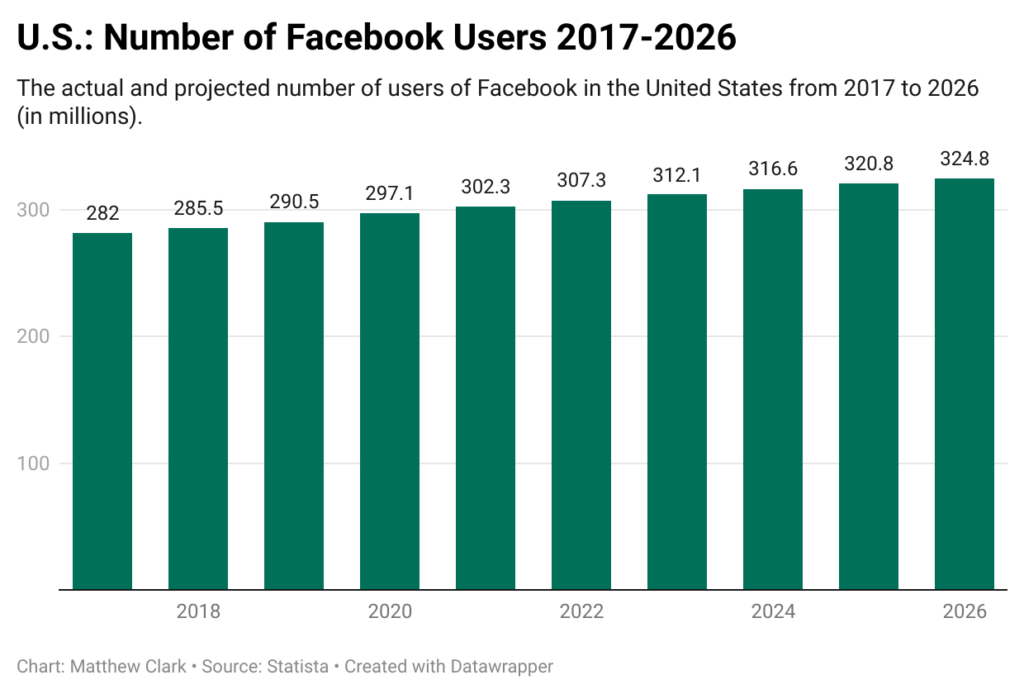 Parallels With the Tobacco Industry

Charles: Now, what’s interesting about that? Let’s look at some of these headlines that have been rocking the company.

We’ll start with the January 6th Capitol riot. Facebook is being blamed for failing to moderate groups organizing for that. They’re being blamed for spreading some of the misinformation that led to it to begin with. Right off the bat, that’s a really nasty, ugly headline. Is it completely fair? I don’t know, but that’s one of the Molotov cocktails being thrown at the company right now.

Beyond that they’ve been blamed for fanning civil war and genocide in parts of Africa where hate spreads on Facebook. The next thing you know, villagers are hacking each other to pieces.

This brings me to an analogy here. I compare social media to tobacco. And I know that may sound a bit ridiculous. How are you comparing tobacco as a product you smoke or chew? How is that the same as a social media network?

Matt: A parallel to look at here is companies like Phillip Morris coming under fire in the early 90s. Upper management knew that cigarettes were causing health issues but still promoted the product nonetheless.

Fast forward to the last couple months, and Facebook is running into a similar issue. Two people have come forward to claim that upper management at Facebook understood the issues that the platform created and knowingly swept those issues under the rug or minimalized them.

Looking at Facebook’s stock chart, FB (red line) is up about 18%. This pales in comparison to technology gains (blue line) of around 40%. FB is currently trading about 10 to 15% below its 50-day moving average (green line), and it’s showing some downward signs.  These reports aren’t helping. It was a good quarter, but not as good as it should have been.

FB Is Trailing Other Tech Stocks 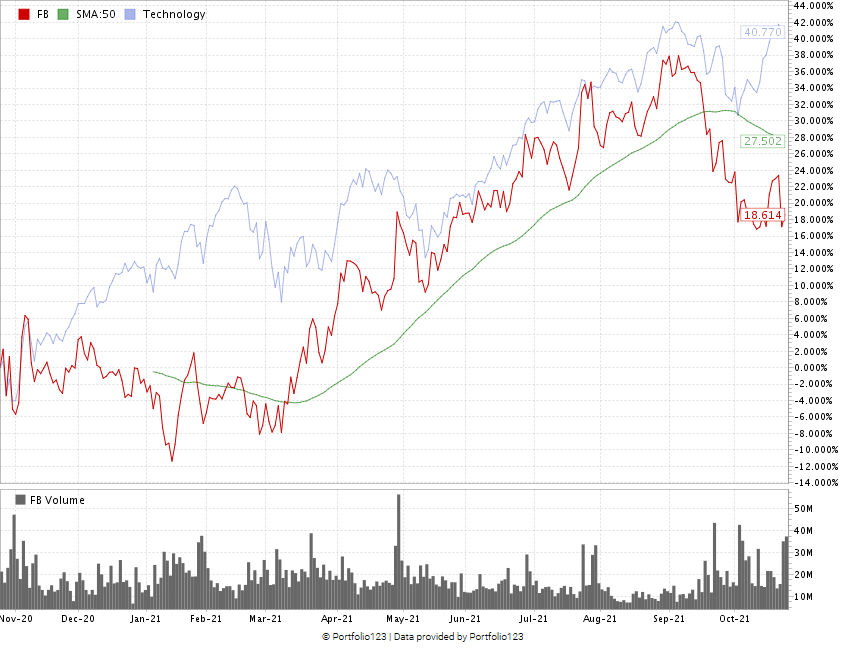 Now there’s possible congressional investigation, which parallels big tobacco in terms of what could happen.

Charles: As recently as the late 80s, you could still smoke on a plane. Smoking was everywhere. It wasn’t controversial. It was just what everybody did.

Then there was a shifting point. The health allegations that had been around for decades finally got to be taken seriously. There was a big congressional hearing and the government really smacked tobacco companies around. You see the result in the share price. The shares of Altria, for example, which was Philip Morris at the time, just cratered in the early 90s.

But how long did it take them to recover? No time at all. There were all these new rules, regulations, oversight, fines. Shares cratered initially, but the company adapted, and even though there are fewer smokers year after year, Altria still manages to make money. It’s increased sales on a dollar basis, not a unit basis. It’s still managed to grow its top and bottom line quite handsomely despite a very, very difficult environment.

Now, it looks like Facebook is in the same spot. Congress may beat Facebook down, and it is going to have to endure it for a while.

But in the end, I don’t think it blows the company or FB stock up. There’s just too much money to be made here. Despite everything we’ve said about the stock, on a significant dip, I would buy it.

Watch the rest of my and Matt’s chat about Facebook here. We deep dive into the social media giant’s Green Zone Rating, and the future for Facebook’s stock amid potential government regulations. 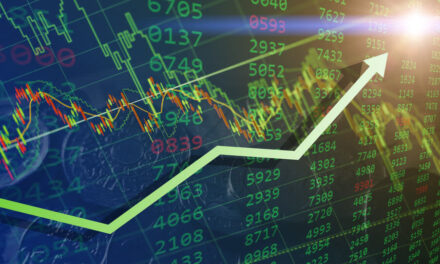 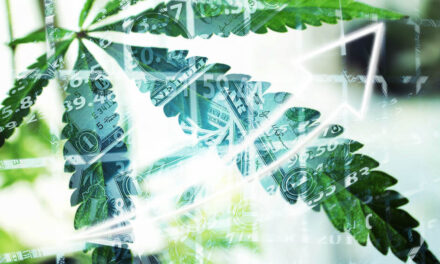