The Federal Reserve’s job is fairly simple to describe in broad terms. Fed policy creates money so the economy can grow.

In practice, it is an indescribably difficult job to do. The money supply requires constant fine-tuning.

When the Fed gets it right, the economy grows without inflation. Too much money creates inflation, according to some economic theories. Too little money leads to high unemployment and slow economic growth.

Over time, the Fed’s job has become more challenging. The economy is less responsive to changes in the money supply, according to the chart below. 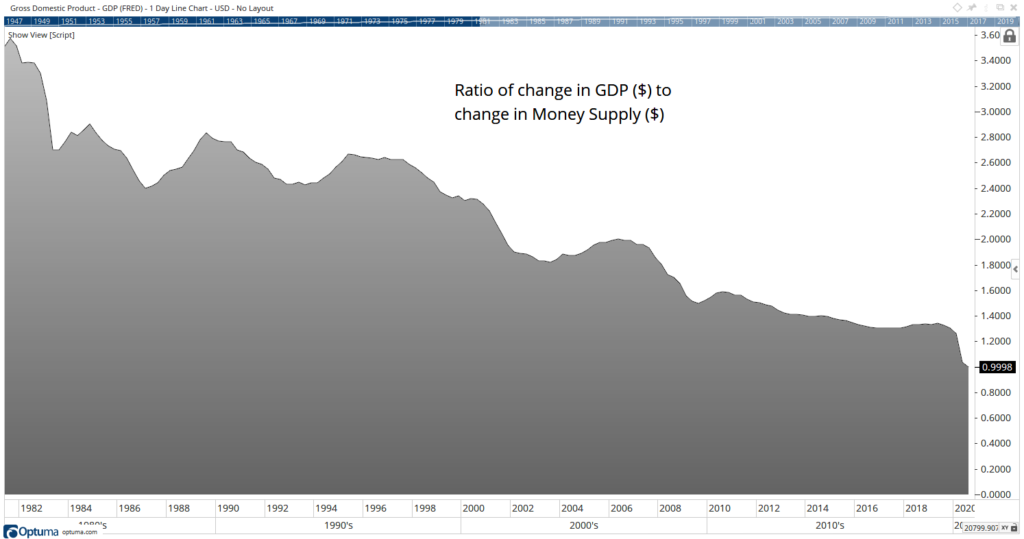 Over time, the trend is clearly down which means the Fed needs to create more and more money to generate economic growth.

Why Fed Policy May Just Be “Pushing on String”

Last week’s GDP report shows the ratio fell below 1-to-1 for the first time. So, the Fed must print money faster than ever before yet should expect growth to remain low.

In other words, the Fed may be trying to push on a string. That’s a phrase first used to explain the central bank’s role in 1935.

In the midst of the Great Depression, Chairman of the Fed, Martin Eccles, said in Congressional testimony:

“…one cannot push a string. We are in the depths of a depression and, as I have said several times before this committee, beyond creating an easy money situation through reduction of discount rates and through the creation of excess reserves, there is very little, if anything that the reserve organization can do toward bringing about recovery.”

The reserve organization Eccles cited was the Fed.

We don’t have reliable data on GDP and the money supply to extend the ratio shown above back to 1935.

But it seems certain we are now facing a similar problem where “there is very little, if anything that the reserve organization can do.”

If the Fed can’t do anything, the recession is not over yet.

What Zoom Stock Decline Says About Economic Recovery Might Surprise You