The Federal Reserve updated its economic projections this week. It confirmed what traders expected. The Fed plans to keep interest rates at zero at least through 2023.

One analyst told CNBC this shows the helplessness of the Fed:

“What they’re saying is these are our goals. We expect to have just barely met them and even then, they’re not raising rates.”

The Fed is unable to raise rates because consumers and businesses aren’t demanding money for investment and large purchases.

The size of the economy, or GDP, can be estimated with just two variables: the number of dollars in the economy, multiplied by how many times a year each dollar is spent.

And the Fed manages the number of dollars in the economy. Before the recession, each dollar was spent an average of 1.2 times a year. This is known as the velocity of money. Velocity is now down to 0.95.

The trend in velocity has been down for decades. But this the first time it dropped below 1.

The Dollar’s Velocity Has Dropped 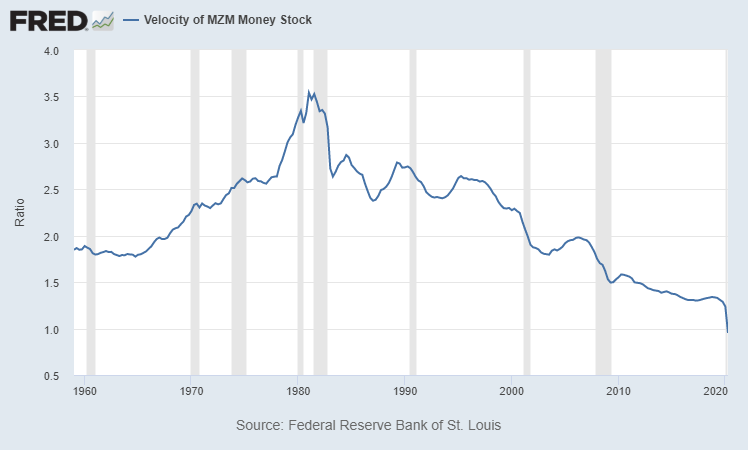 That chart shows why the Fed isn’t worried about inflation. Even as the amount of money increases at unprecedented rates, the dollars aren’t being spent. Until money is spent, inflationary pressures remain low.

There’s No Inflation Without Spending

Without inflation, the Fed is confident that interest rates will remain near zero until at least 2023.

This is a problem that isn’t easy to solve.

With low rates, and no chance of higher rates, businesses can take time evaluating decisions. Consumers are in no rush to make large purchases because prices are stable. And financing costs will remain low for years.

When rates rise, businesses and consumers make quicker decisions. Real estate agents know they get busier when mortgage rates start rising since that’s when buyers rush into the market. They know waiting will make homes less affordable, so they act.

But the Fed can’t make them act unless inflation justifies higher interest rates.

Until consumers start acting, the Fed is pushing on a string and that’s not going to stimulate the economy.

This Indicator Is Signaling Long-Term Trouble for Stocks

Emerging Markets Are Bullish — One ETF to Buy