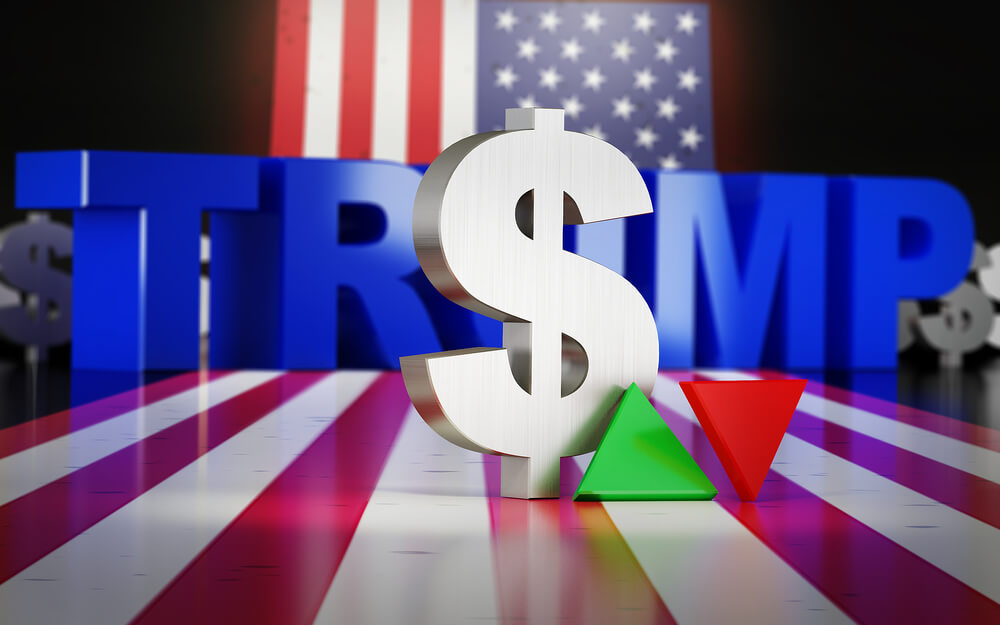 Perhaps a bit of a surprising poll by the Financial Times this week shows two-thirds of Americans say they are not better off financially now than they were when President Donald Trump was elected, which casts some doubt on whether the economy’s overall strength is enough to win him a second term.

The poll of likely voters was conducted by the Financial Times and the Peter G. Peterson Foundation, and 31% of Americans say they are actually now worse off than they were at the start of Trump’s term in 2017. Another 33% say their financial position is about the same, and just 35% say they are better off.

The main driver of voter discontent is slow wage growth, as 36% of respondents cited this factor as their reasoning for not doing better under Trump. Another 19% listed personal and/or family debt as the reason for their worsening situation.

The U.S. Department of Labor said Friday that hourly income rose 3% during the month of October, which was near the high for the past decade but still lower than before the 2008 financial crisis.

The poll’s findings show that Trump is facing perhaps a new challenge in reelection outside the ongoing impeachment inquiry and Russia-gate. Trump will lean heavily on his economic numbers, which he has repeatedly called “the strongest economy in the history of our nation.”

Trump touted the new record highs set by the Dow and S&P 500 Monday morning as well.

Last week, the latest U.S. economic data showed third-quarter GDP of just 1.9% and, according to the Financial Times, its polls suggests only a narrow segment of the U.S. voters believe the economy to be as great as he claims it is. 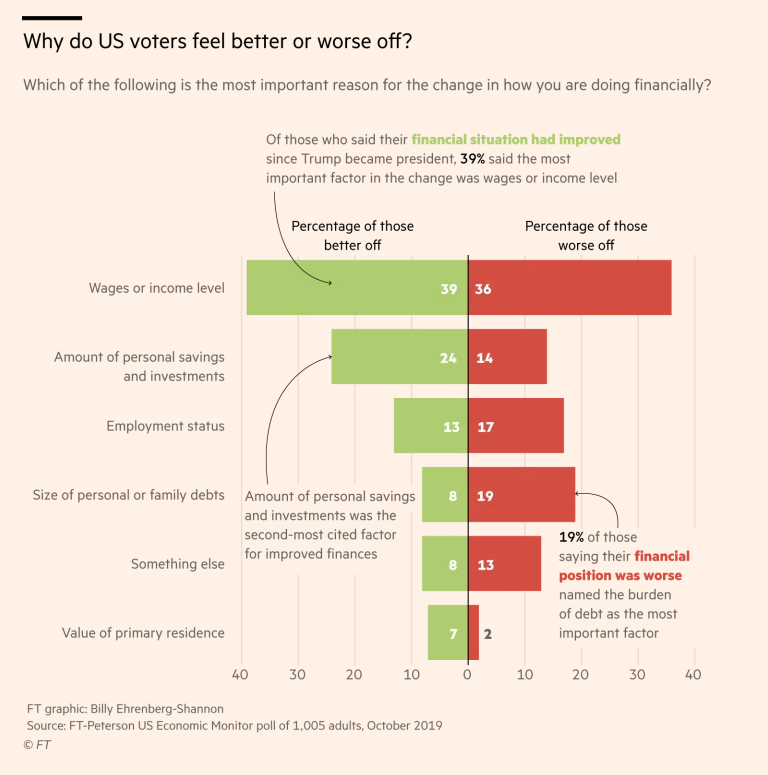 Of the respondents, college-educated men were most likely to feel better off now, with 48% saying their situations have improved.

A problem for Trump, however, is that college-educated whites in battleground states heavily favor the top Democratic challengers over Trump head-to-head, according to recent polling of 7,802 respondents by The New York Times Upshot and Siena College.

Trump destroys everyone among whites with no college. Trump was +26 vs. Clinton in 2016 and is +24 against Biden and Sanders, and +26 against Warren, according to the poll. 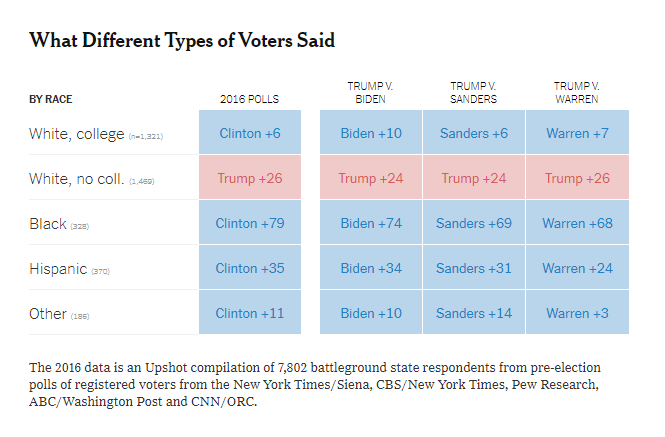 The Tax Cuts and Jobs Act and massive deregulation of environmental protections have been the hallmarks of Trump’s economic agenda, and the country, not surprisingly, is sharply divided on these subjects.

Exactly 45% say these policies have helped Americans, and 45% say they have hurt Americans. Also not surprising, party affiliation is the key driver in whether you are for or against Trump’s agenda: 84% of Republicans approved of the president’s policies and just 10% of Democrats approve. 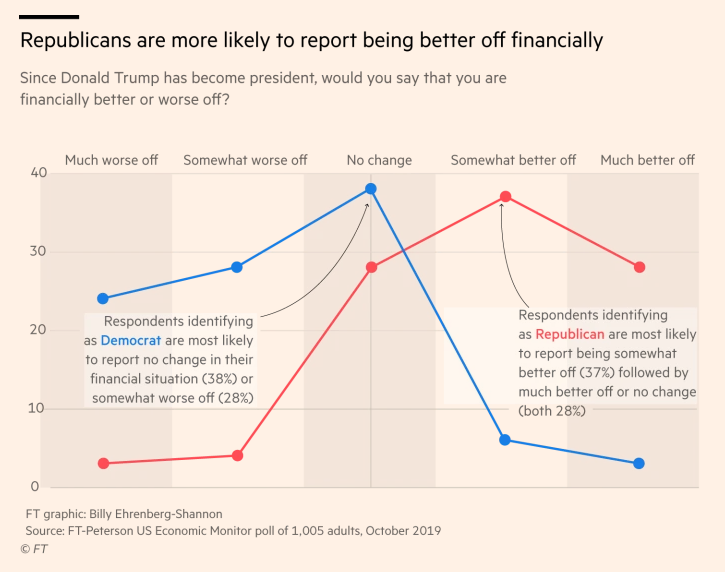 Trump’s divisive personality — no matter how good the economy is — could prove to be an exception to the rule that most presidents with strong economies are reelected, according to University of Virginia Center for Politics Director Larry Sabato.

According to 27% of respondents, Trump’s trade policies, particularly in regard to China and Mexico, are the biggest threat to the economy. Another 26% cited the rising cost of health care, and just 7% cited Federal Reserve interest rate policies — which Trump always points to as the reason for any negative economic news, that or “Do Nothing” Democrats, as he frequently calls them. 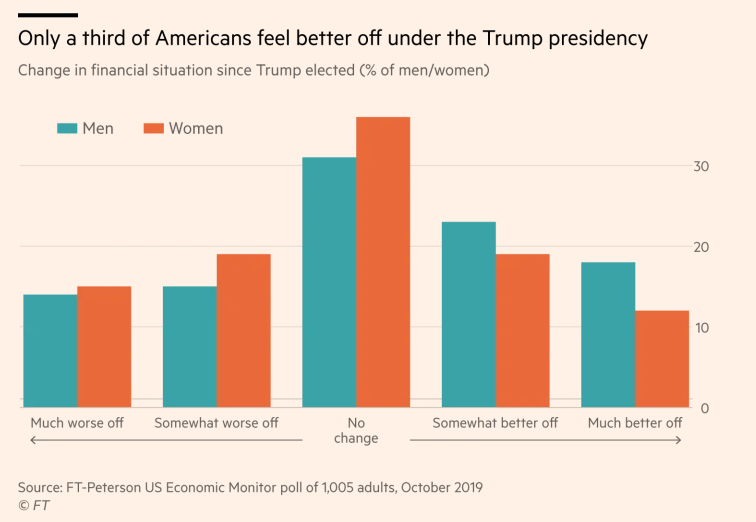 Editor’s note: Considering the results of this poll, we’d like to conduct a poll of our own. Vote and then share the reasons for what you picked in the comments below. 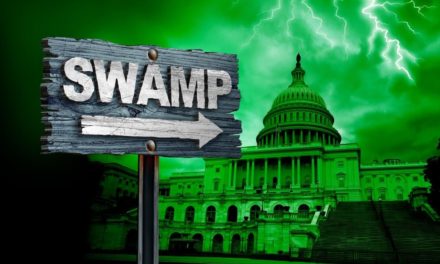 Bonner Part V: The Deep State, Not Trump or Congress, Runs the Country