Home » Chart of the Day » To Reagan’s Chagrin, Government Holds the Key to Economic Recovery

To Reagan’s Chagrin, Government Holds the Key to Economic Recovery

Many things have changed in 2020. Current events are challenging one of the cornerstones of President Ronald Reagan’s legacy.

The nine most terrifying words in the English language are: I’m from the government, and I’m here to help.

But the government may be the only thing that can help the economy right now.

The economic recovery stalled in July, according to current data. The chart below shows the weekly recovery tracker created by Oxford Economics. Using high-frequency data like new claims for unemployment, the index shows the economy is operating around 80% of the pre-shutdown level.

The Economy Is Running at 80% 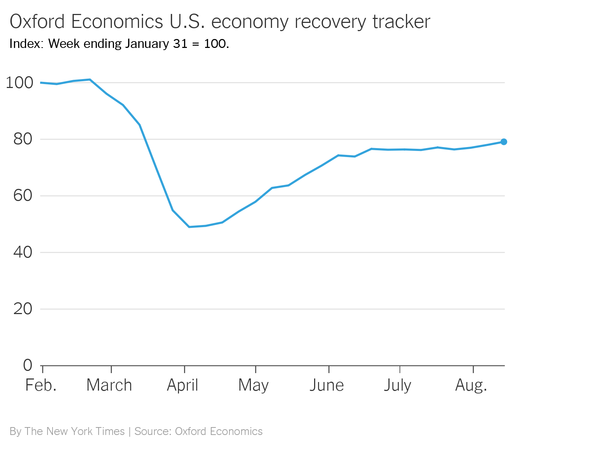 The next chart shows restaurant seating also stalled in July. 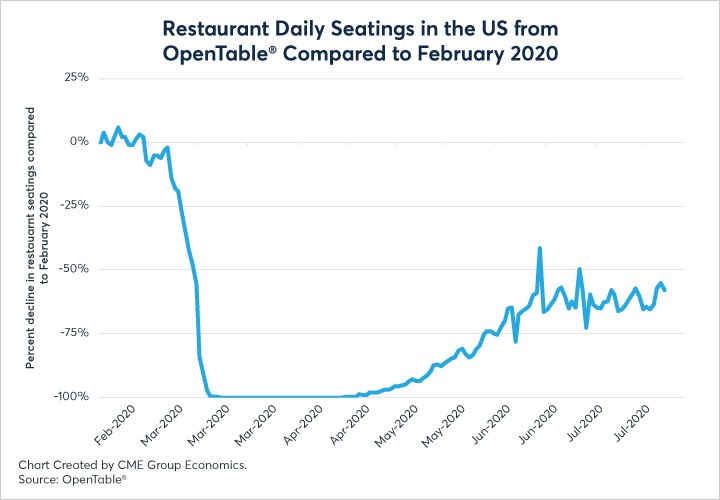 Restaurants are serving less than half the number of diners they served before the shutdown. That signals the economy cannot fully recover without help.

Government Spending May Be the Key

One reason for half empty restaurants is government restrictions. New Jersey’s governor just announced “restaurants statewide will be able to open for indoor dining beginning this FRIDAY at 25% capacity and with social distancing between tables.”

The economy can’t recover until restaurants, airlines and other businesses return to full capacity.

But there are signs that consumers won’t patronize businesses even if they were allowed to.

Economists with the CME stated:

U.S. consumers are not halfway back in terms of their willingness to associate indoors with strangers, and the July pause after the May-June recovery signals that the reluctance to participate in indoor group activities may not be quickly or easily reversed.

In other words: Consumers aren’t going to spend like they did in January until they are confident they’ll be safe.

Given these fears, it might take government spending to restart the economy. Government help might be the only way the economy maintains its current level of operations.

Reagan wouldn’t be happy, but he would certainly be cutting a deal and having drinks with Congressional leadership.