Home » Chart of the Day » What Ferrari’s Success Says About the Economy, Tesla Hype

What Ferrari’s Success Says About the Economy, Tesla Hype

There is a limited market for Ferrari, an automaker whose entry-level car starts at $245,000. That makes the company an important indicator of the luxury economy.

According to Ferrari’s latest earnings guidance, that part of the economy is doing fine.

For the full year, Ferrari NV (NYSE: RACE) expects earnings to come in at the top of its previous guidance range, about $1.3 billion. The CEO told analysts that orders were more or less back to pre-pandemic levels.

The stock is now near new all-time highs. 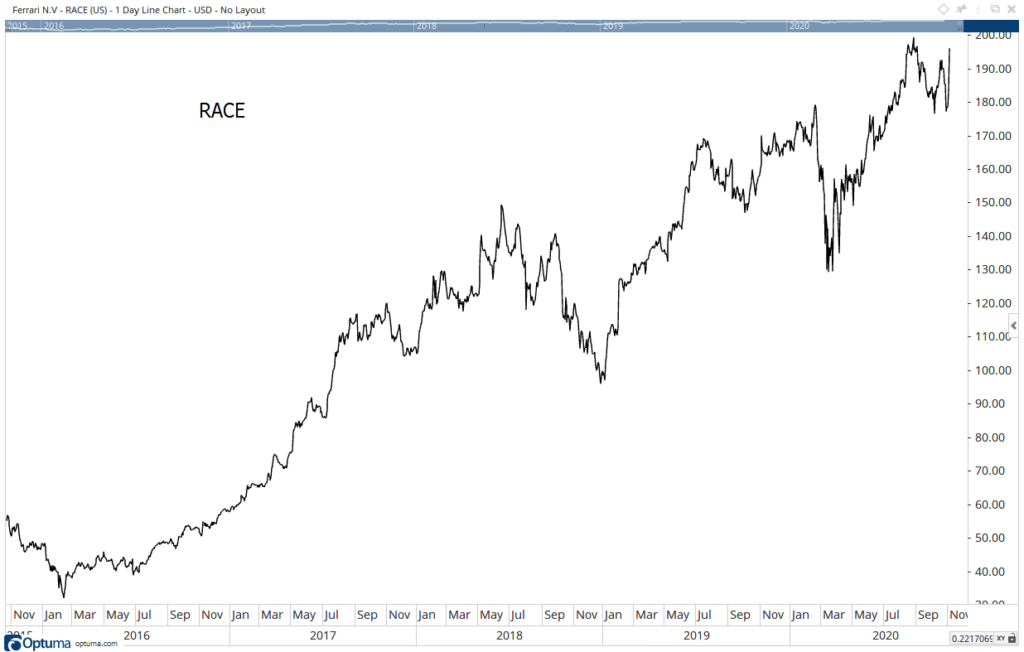 “Ferrari said shipments were recovering well following a seven-week freeze of production during the first wave of the coronavirus earlier this year. … customers were buying its 12-cylinder vehicles at a clip 15 percent higher than last year.”

This is much better than the less-than-luxury sector of the economy.

Last month, Ford Motor Co. reported that its sales in the third quarter beat analyst expectations but were down 4.9% from 2019. Sales of new vehicles by General Motors Co. and Fiat Chrysler Automobiles were down 10%.

This shows the uneven effects of the recession.

High-wage earners have enjoyed steady income and even wealth increase in many cases. Low-wage earners are often struggling.

Even the Federal Reserve recognizes this as a problem. Federal Reserve Governor Lael Brainard recently observed that “the economy’s overall gains since the worst of the crisis mask big disparities among sectors and among Americans that could hold back the recovery.”

In addition to highlighting the luxury economy’s strength, Ferrari’s CEO assured analysts the automaker was not rushing into the electric vehicle market.

He said he doesn’t think the company will ever go 100% electric. In fact, the 65-year-old doesn’t believe Ferrari will “see 50 percent within my lifetime.”

Gas-powered engines might simply be required for the performance of a Ferrari. But this casts doubt on rapid advances in EVs promised by Tesla CEO Elon Musk and other enthusiasts.

While Ferrari focuses on current technologies, investors should consider that a company catering to the most successful part of the economy knows what’s possible — and what’s hype.