Home » Chart of the Day » Palladium: The Best Long-Term Commodity Trade You Don’t Know About

Palladium: The Best Long-Term Commodity Trade You Don’t Know About

If the economy recovers in 2021, commodity markets should deliver gains. A bull market in commodities is likely even if the economy maintains its current pace of production, given recent bear markets associated with global shutdowns.

Goldman Sachs agrees with this assessment. Jeffrey Currie, Goldman Sachs’s global head of commodities, laid out this trend, according to SP Global:

The world is entering a “long-lasting bull market” for commodities, with even oil set to benefit as recent underinvestment, dollar weakness, government spending and the energy transition boost demand across the board.

The Goldman analyst cited demand as an important factor, noting “Every single commodity market with the exception of wheat is in a deficit today,” and highlighted the example of oil, saying capital expenditure in the oil sector had fallen an unprecedented 40% in the first half of the year.

Because oil is needed to build green energy projects, he’s confident oil will provide gains for some time.

A weak dollar will also boost commodities and, according to Currie, has already begun to do so “with the effect already evident in price rises in oil and commodities such as copper and iron ore, with iron ore prices hitting seven-year highs [in early December],” and that “this is not something we’re forecasting for the future — we’re inside it right now.”

As investors consider commodities, they should look at palladium. This metal has been the best performing commodity in three of the past four years. 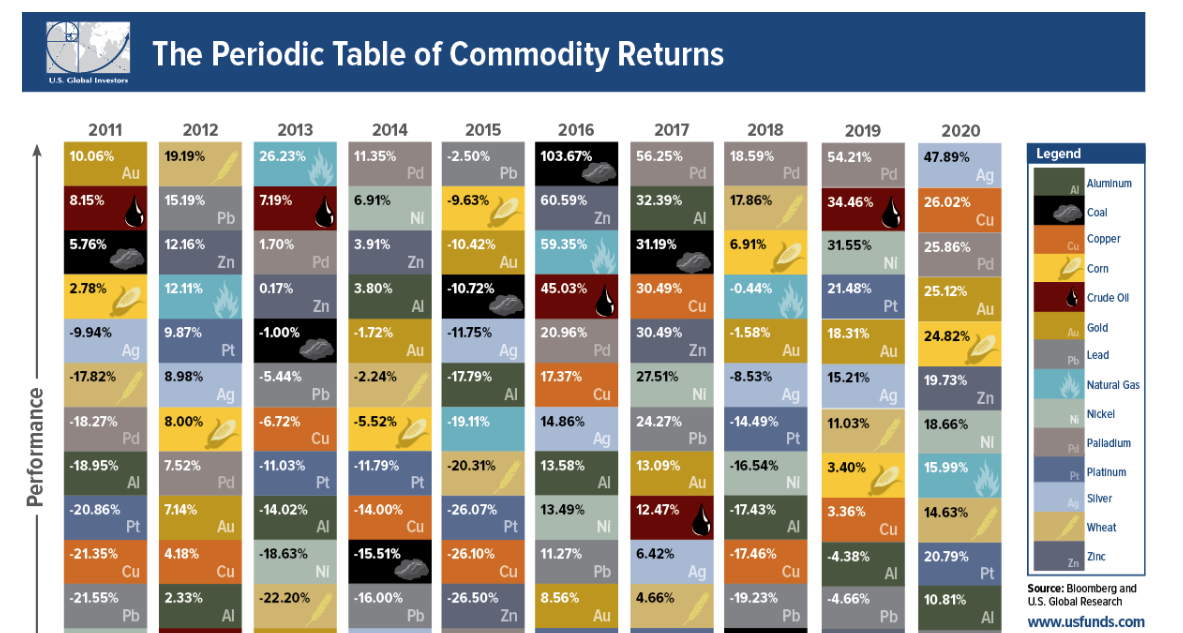 Palladium is an important component in catalytic converters, a part of a car’s exhaust system that controls emissions. Catalytic converts are used in gas-powered and hybrid vehicles.

According to the BBC, this use should keep demand for palladium high as governments around the world, “notably China, are tightening regulations as they attempt to tackle air pollution from petrol vehicles.”

Also, “as a secondary product of platinum and nickel extraction, miners have less flexibility to increase palladium output in response to rising prices.”

Investors looking to benefit from this trend should consider Aberdeen Standard Physical Palladium Shares ETF (NYSE: PALL), an ETF with about $356 million in assets that offers a pure play on the commodity.