You can see this below in the chart of the iShares Russell 2000 ETF (NYSE: IWM). The Russell 2000 is an index of small-cap stocks. 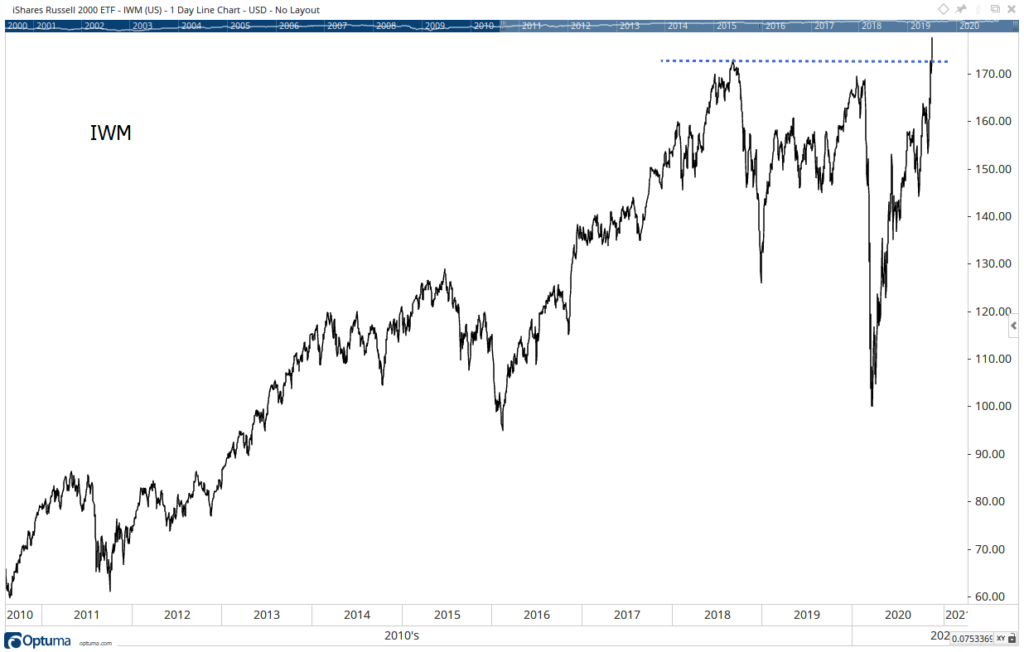 Small caps — stocks with a market value between $300 million and $2 billion — tend to lead the stock market in both directions.

In a bull market, small companies have greater growth potential than large companies.

These relationships were the case in almost every bull and bear market since the 1920s.

But that relationship broke down in 2018. Large-cap stocks recovered from that sell-off in quick fashion.

In the past two years, large caps have continued to reach new highs despite a brief bear market earlier this year.

In the past, after remaining below all-time highs for more than a year, small caps consistently delivered gains over the next month.

There have been 10 times where small caps remained below all-time highs for at least one year since the Russell 2000 began trading in 1979.

In nine of those cases, small caps were higher a month later. The average one-month gain was 2.4%.

In seven of those cases, small caps were higher a year later. The average one-year gain was 11.2%. The average loss in the other years was 4.9%.

This sets up a favorable reward-to-risk ratio based on history.

The next 12 months are likely to follow the typical historical pattern: Small caps should lead the market.

If the economy recovers, small caps should beat large caps. This is especially true since the new administration appears likely to target large tech companies.

If the economy suffers a large decline, small caps should lead to the downside. Many are financially stretched after months of slow growth. Without a strong economy, many members of the Russell 2000 are at risk of bankruptcy.

Both potential rewards and risks are higher than average right now.

Individual Investors Turn Bullish: A Bet on the Wrong Side