This Market Rally Is Bad News for the Economy

Prices in the stock market discount the future, according to academic theory. This means that today’s price reflects what will happen over the next year. In economic terms, future operations are discounted because investors are looking ahead.

That theory can be confusing. In simple terms, discounting means that if business will be good in the future, today’s stock price should be high.

Valuation metrics such as price-to-earnings ratios may look high today, but they will accurately reflect what happened a year from now.

Likewise, if the future looks bad, stock prices should fall.

This theory can work well in the real world. Especially when it’s applied to broad stock market indexes.

Since 1950, for example, the S&P 500 Index has always peaked before a recession. This shows that investors were selling before the economy turned down.

Most of the time, bear markets have ended during recessions. You can see this in the chart below. The gray bars indicate recessions.

The Stock Market Peaks Before Recessions 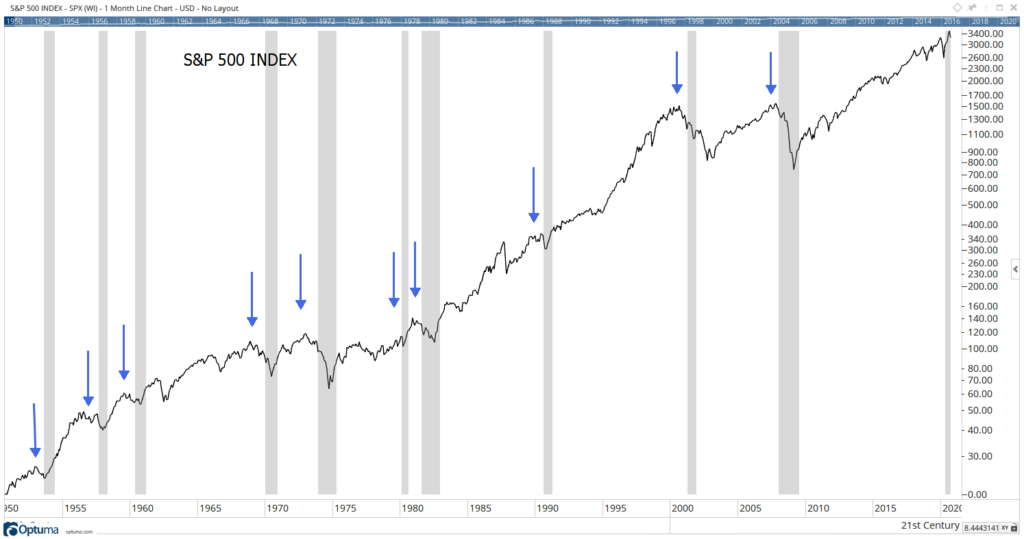 Peaks came before all 10 recessions of the last 70 years. The only exception is the recent market action. And that raises questions.

Outcome 1: With the S&P 500 at new highs, it’s possible the recession has ended. New highs then tell us to expect economic growth and higher earnings.

Outcome 2: Another possibility is that the initial economic shock is over, but a second decline could lie ahead. This may look like the double-dip recession in the early 1980s.

Outcome 3: Finally, it’s possible that the stock market is just wrong, and the economy hasn’t recovered. That means the new high in the S&P 500 is due to irrational exuberance. And that implies a deep decline is expected to correct the excessive bullishness.

Those are three possible signals from recent highs. The second and third end badly.

The first possibility assumes that analysts and economists are too pessimistic, and investors are right. That’s possible, but unlikely.

We will know in due time, but investors should consider defensive positions in this environment.

Why Durable Goods Data Is Bearish for Stocks