Luongo: Johnson Navigates Brexit Swamp — but the Jackals May Tear Him, UK Apart 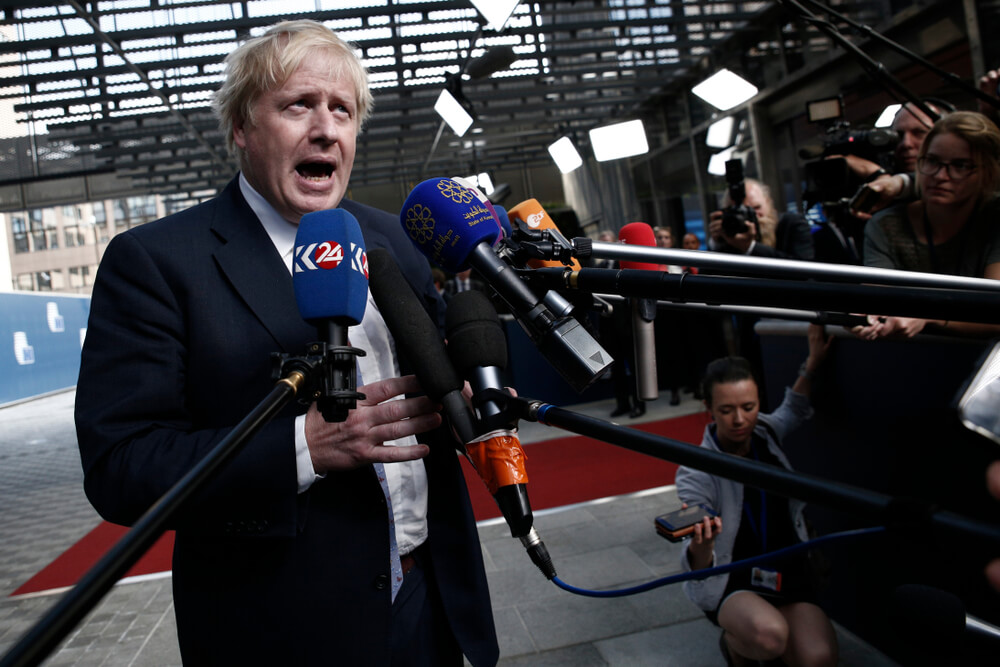 U.K. Prime Minister Boris Johnson has finally forced both the British Parliament and the European Union into a corner on Brexit. In many ways, he’s done the unthinkable.

Theresa May gave up so much ground in her two years of treason that it was near impossible for Johnson to negotiate a good treaty.

He’s beaten the Eurocrats in Brussels at their own game of chicken. For more than three years they have pulled every trick in the book to stop Brexit, including putting forth a withdrawal treaty that was materially worse than just staying in the EU.

His announcement with European Commission President Jean-Claude Junker that they’ve reached a deal creates the kind of clarity that markets like, even if the final text of the deal isn’t: A.) known, and B.) likely to be optimal from a free marketeer’s point of view.

At their presser, Juncker looked defeated for the first time in the entire affair.

“This is a fair, balanced agreement.” “It means that we can deliver a real Brexit that achieves our objectives.” “It creates a unique solution for Northern Ireland.”

Here’s a round-up of all the Brexit deal reaction https://t.co/Ie1rG9aEOy pic.twitter.com/yPb9jvGvch

Watch the body language in that clip. Johnson is so happy he can barely contain himself, and Juncker looks like someone just dropped a bottle of rare French wine on the floor.

The EU really thought they had this thing stitched up, as the Brits would say. But the war of attrition they waged against Brexiteers worked against them. Public opinion in the U.K. has hardened around a “No Deal” option and Nigel Farage’s sniping at the Tories’ mishandling of Brexit has been incredibly effective.

I have little doubt that this is what I or Nigel Farage would consider a good deal. In fact, it’s a terrible treaty that sees the U.K. give up most of its leverage in return for very few guarantees.

But it was a deal that was politically possible given the circumstances. And the movement by Brussels at the last minute is your clue that economic conditions on the European continent are far worse than they are letting on.

I’ve been banging on about this for months, Germany’s economy is crashing. As that continued and the domestic political pressure mounts on Angela Merkel, the leverage was rising on the U.K.’s side of the negotiations.

Theresa May gave up so much ground in her two years of treason that it was near impossible for Johnson to negotiate a good treaty. But in some ways, just getting the EU to buckle at the last moment is itself a win for Euroskeptics.

It is the deteriorating economic reality that got the EU to cut a deal at the 11th hour. That’s why Juncker may be the one, as Ross Clark at The Spectator suggests, who goes down as the hero of Brexit.

His ruling out an extension now that a deal has been agreed to not only neuters the Benn Act, but it also paves the way for Johnson to now blackmail Parliament, like Farage has been saying from the beginning, with a binary choice on Saturday of his “Deal or No Deal.”

As Mr. Clark points out, “Remainers can squeal all they like, but without EU agreement there can be no extension. If the EU refuses to play ball, there will be no prevarication, no further kicking Brexit into touch.”

At this point I’m sure that Juncker, Chief Negotiator Michel Barnier, German Chancellor Angela Merkel and the rest of the Brussels Politburo understand that this is as good as it gets for them. Further delay means the uncertainty undermines the rapidly imploding German economy that much more.

Transferring even more leverage to Johnson.

Because the Remainers in Parliament didn’t have an exit strategy other than Revoke Article 50. They thought they could force Johnson out of office, go for an extension and force a second referendum, and then face the general public after Brexit had been sidelined.

Because they believed their own headlines that Johnson couldn’t get a deal from Brussels.

But that was never realistic as anything other than a bluff because politically it wouldn’t work. The people who want a meaningful Brexit are more powerful than those that don’t. If that weren’t the case, Brexit would have been history back in March.

Johnson smartly held the line on the Halloween deadline while banking on the EU folding before it.

In the end they did because he had the leverage to win this game of chlorinated chicken.

Two of these, Nos. 1 and 3, are good for Britain as long as the terms of Johnson’s deal bring clarity to the country’s trade and investment policy on Nov. 1.  If they don’t, then only No. 3 is the best outcome for Brexit in any time frame.

I told you to go long the pound versus the euro a couple of months ago, saying anything that brought certainty to the proceedings would lift a lot of the bearish sentiment surrounding the pound.

That call was unquestionably the right one.

The markets want a Brexit deal because the markets don’t want further uncertainty to continue. With the terms of the treaty now changing and it looking like Johnson has vanquished his political rivals, the clear interpretation is that this deal will be better for the U.K. than Europe in the near term.

The euphoria over a deal becoming likely this weekend may, however, be both premature and overdone. If Parliament votes the deal down then the pound will crash versus the dollar and volatility will remain, but versus the euro the current divergence will remain.

Since the euro-zone has so much more to lose on a No-Deal Brexit, the euro will be hurt far more than the pound from here forward as political manipulation of the markets will lose its power in the face of growing policy certainty.

The big takeaway from this is that Boris Johnson has likely navigated the Brexit swamp as well as he could have. Euroskeptics should have more wind in their sails now that the EU is beatable. Now it’s up to whether the jackals in Parliament can unite long enough to tear him and the country apart.

It’s not quite over yet, but the odds of a decent outcome in this final act of the Brexit drama have risen substantially.