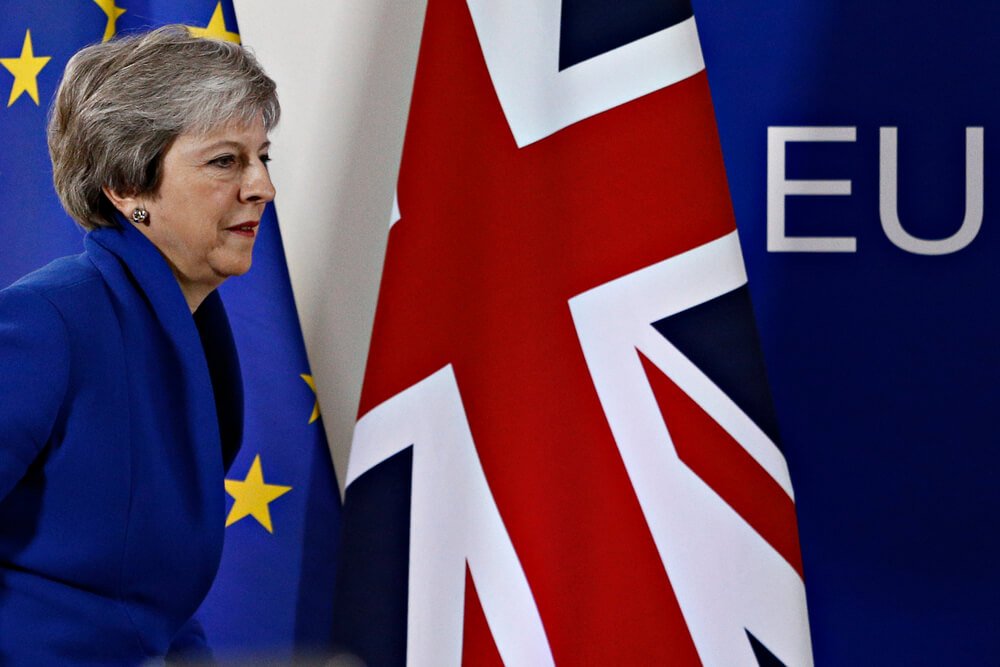 I love watching authoritarians squabble. It means they are losing to us. Because under normal political circumstances they put up the pretense of fighting while going forward with their unpopular plans.

And we pay the price.

And so it looked with Brexit. From the beginning of the process no one in power either in the U.K. or EU wanted Brexit. And yet voters delivered it, in a stunning rebuke of the EU’s drive for a continent-wide empire based on projecting German power and values.

The recent article by Alistair Crooke covers this to near perfection for those who don’t understand what the real story behind the fight for Brexit is truly about. And those of you that have Brexit fatigue, get over it.

Brexit is the single most important political event of this century. It’s one of the few things that is bigger than Trump. So, paying close attention to it is important.

That’s why it has so divided people. It represents an existential threat to the inevitability of modern liberalism. The European Union is the symbol of that inevitability.

This is why every roadblock imaginable has been put up in front of Brexit. But there is the little problem of a continent-wide rejection of Germany’s vision of the future; a unitary bureaucracy straight-jacketed by Germany’s fear of hyperinflation, which demands a particularly virulent form of austerity.

That austerity has created the fiscal imbalances within the EU which have it on the verge of a sovereign debt crisis so massive it threatens its future. And German political leadership under Angela Merkel has led to furthering the EU’s goals of political, fiscal and regulatory unity at the expense of German solvency.

Look no further to the troubles of both Commerzbank and Deutsche Bank (NYSE:DB) and their forcible merging at the behest of the German government and the ECB as your proof. Remember, this is just ahead of the new Basel III Tier I capital adequacy rules, which go into effect just two days after the Brits are due to leave the EU.

The problem now, as Crooke so rightly points out, is that Germany has woken up to this cultural betrayal of prudence and has rejected it. Hence the rise of Alternative for Germany (AfD) and the fall of both Merkel’s Christian Democratic Union (CDU) and her coalition partners, the Social Democrats (SDF).

So, as we approach the end of the Brexit process the big question on everyone’s mind is: What happens next?

The markets have been subtly telling us for months what they want. The British Pound has been strengthening versus the euro since the day the treaty agreed to by Prime Minister Theresa “The Gypsum Lady” May was rejected by parliament. 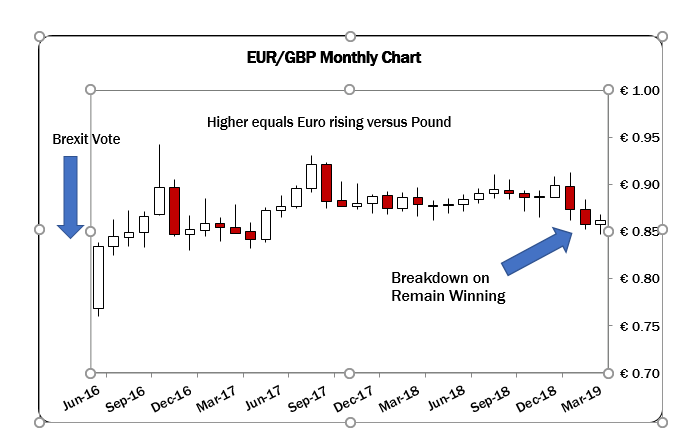 The pound fell out of the tight trading range versus the euro in January which carried into early this month as the prospects of a “hard” or “no-deal” Brexit receded. The more roadblocks parliament put up and the more the EU held its ground (which it has to do), the further the pound rose versus the euro.

But March has seen that fall out of bed reverse a bit because as we approach the end of this stand-off between the EU and the proponents of national sovereignty, popular opinion is hardening for ending it.

And if that means no deal, then so be it.

Moreover, the FTSE 100 has quietly begun outperforming the German DAX. The FTSE is up 3.3 percent so far in March while the DAX is off 0.32 percent, which much of that discrepancy coming this week as the odds of a no-deal Brexit have risen.

With each twist and turn of the Brexit drama we edge closer to the no-deal scenario. The EU cannot allow Britain a unilateral path out of the Withdrawal Agreement — an internationally binding treaty — because it opens the floodgates for the rest of the continent to revolt against further integration.

That’s what the stumbling over the Irish backstop is about. It’s a crude way to force the U.K. to stay as close to the EU as possible and surrender sovereignty while not even having representation in European parliament.

The EU has to send the message that leaving will be worse than staying and that if you attempt to leave you will be punished in the most severe way.

On the other hand, the British political class, mostly believers in the EU, know how deeply unpopular betraying Brexit would be and are scared to death of losing their jobs in the inevitable next election.

Meanwhile Theresa May tries to salvage the deal she was tasked to sell but hasn’t been able to. On Wednesday she played the perfect domestic political game by putting the blame squarely on MP’s who couldn’t resolve their differences.

This attempts to deflect blame from her and the Tories and may have been your best signal that a no-deal Brexit is now fait accompli. Because her speech could be seen as trying to rally the Tories while exposing Labour.

The news that May has resigned herself to a no-deal scenario now stands as the bulwark holding Brexit together. In the next week, British MP’s will have to decide just how much contempt they hold their constituents.

But more importantly we’re finally seeing movement in the EU27 camp. Will there be a move within the Tories to remove May and revoke Article 50? Not likely.

The EU thought they had the trifecta: 1. get rid of the U.K. but 2. keep them on the line as a tax cow to milk indefinitely while 3. making good on their implicit threat to Italy and Hungary to do the same to them if they get uppity.

But they don’t have that trifecta. What they have is a mess. Because revoking Article 50 means the U.K. stands for European elections in May, which could tip the balance in the European parliament to the Euroskeptics and against the Merkel-style integrationists reversing the course of the EU project.

And that is something they want less than keeping the U.K. on a string.

The markets sense this. And they are beginning to realize that a no-deal Brexit is the best of all possible outcomes now because at least it will bring certainty. And markets love certainty.

The FTSE outperforming the DAX and the pound falling against the euro is a clear signal that the markets feel Germany is finally losing its grip on the narrative.

A no-deal Brexit will be met with immediate negotiations on a trade deal to satisfy Article 24 of GATT, which will allow them to trade without any restrictions for up to a year during a free trade deal negotiation.

Germany can’t afford to lose British markets for their exports. To call Euro-zone growth anemic would be a kind. British exporters will see their goods become more competitive on the open market outside of the EU’s tariff restrictions, coupled with a weaker pound.

The certainty surrounding that scenario will unlock capital that is now currently frozen due to uncertainty. The giant sucking sound which will result will be from capital fleeing the European markets toward the U.K. and the U.S.

The Fed’s further capitulation yesterday confirms that they are scared of a dollar liquidity crisis after a no-deal Brexit. And the bond markets have followed suit with the U.S. yield curve down across the board and flattening as foreign capital buys the long-end in a massive safe-haven buying spree. 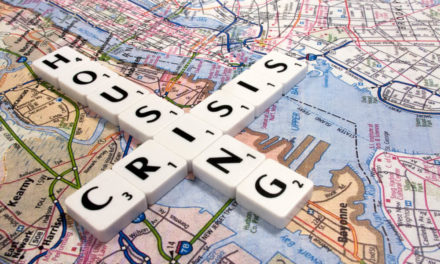 41% of New Yorkers Can’t Afford to Live There Anymore