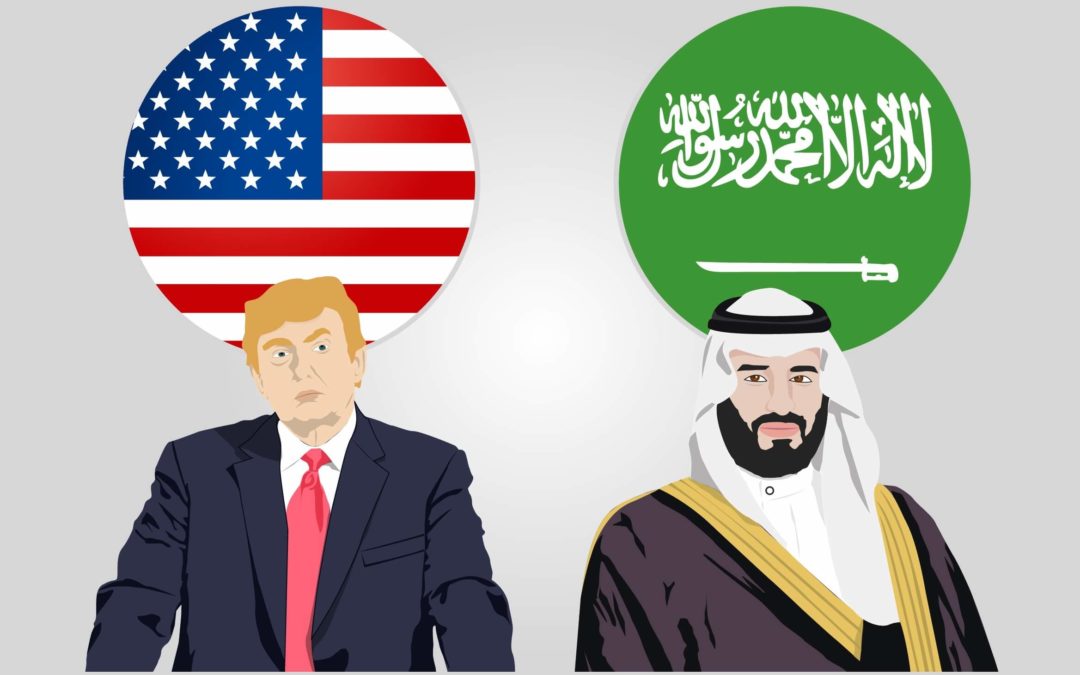 I hate to sound like a conspiracy theorist but I noted a while ago that Fridays have become the most important days of the week, news-wise.

Trump is successfully fighting a ridiculous impeachment process by making goo-goo eyes at the stock market via Twitter on a Friday.

It’s gotten so bad that I don’t want to write my weekly column on Thursday night lest I wake up Friday to it having grown stale.

It’s not that I expect President Donald Trump to tweet something market positive on Fridays vis a vis China trade talks, it’s rather that I’d be shocked if he didn’t.

And he didn’t disappoint.

As we approach the European summit next week, noises are finally coming out of Dublin and Brussels that an exit deal between the U.K. and the EU is possible. That sent the British pound soaring versus both the dollar and the euro.

But the big one is the news that someone attacked an Iranian oil tanker off the coast of Jedda in the Red Sea, causing a spill but, thankfully, no lives were lost.

Oil markets, teetering on a breakdown below critical support levels are miraculously stick-saved by Trump’s twitter feed and a couple of rockets.

The only thing I know at this point is that the Saudi government should be considered on death watch unless Trump is willing to pull troops out of Syria and Afghanistan and relocate them to fight a Houthi invasion along the Red Sea coast.

This is now possible after the massive rout of Saudi forces last week that saw thousands of troops captured and tons of war materiel.

So here we are staring at a Friday where no one wants the markets to print certain prices and clue traders in that the people in charge are making this stuff up as they go along.

If I can see these things on a chart, you bet the military dim-lights in Riyadh can as well. Trump understands the news cycle better than any person alive. And the feckless pols in Brussels are well aware of how precarious the European currency and debt markets are right now.

Any hint of a Brexit deal coming into the weekend before the big summit would be in their best interest.

There’s no conspiracy here. These headlines are all coming in a clump on Fridays because that’s where the most market bang for the buck is. That’s the day where weekly closing prices print. That’s the day where momo-monkeys make their decisions about whether they want to be long or short while the market is closed for two days.

People respond to incentives. And if the incentive is for Friday to be the day to get the news out there for the most effect, it tracks then that that’s when it’s likely to occur.

So, let’s look at what these big pronouncements created shall we?

I want to start with Brexit because it is the most instructive. The dominant narrative coming from the EU and the British media is that a No-Deal Brexit would be terrible for the U.K. The dominant trade has been a weakening of the pound and a sluggish FTSE 100 thanks to investment slowing down, in turn thanks to Brexit uncertainty.

Looking at the markets this morning tells a completely different story. The German DAX is up more than 2% on the news of a possible deal. The pound rallied to $1.26 and the FTSE continues to lag, up just 0.4%. Meanwhile, the German yield curve is up 3 to 5 basis points while U.K. Gilts are off 9 to 10 basis points, and the euro is stable at $1.104.

The market clearly thinks any deal between London and Brussels is a win for Germany, not the U.K.

This is because the market is actually smarter than the people who think they run it.

If Johnson traps the U.K. in a zombie deal that leaves them on the hook for a large portion of the Euro-zone sovereign debt crisis over the next two years, the U.K. will continue to be un-investable. This is what scares the EU to no end, being left to deal with its own problems without milking the U.K. for its problems created by the EU’s insane structure.

Switching to Trump and oil, it’s clear that no one in the U.S. or Saudi Arabian power circles wants oil collapsing below $50 per barrel. The Russians and the Iranians don’t care, they trade oil now mostly outside the dollar and their currencies immunize them to the fluctuations.

Trump watches the stock market like a hawk and the Saudis watch the price of Brent like their lives depend on it, because they do.

So, some noises that talks are good and an attack on Iran’s tankers are good for oil prices. An end to the trade war (very unlikely) and Iran bowing to U.S. demands to stop exporting oi (even less likely) is doing nothing more than creating yet another opportunity to short oil.

When you look at oil’s recent price history, you can see the interventions into the market as clear as day. 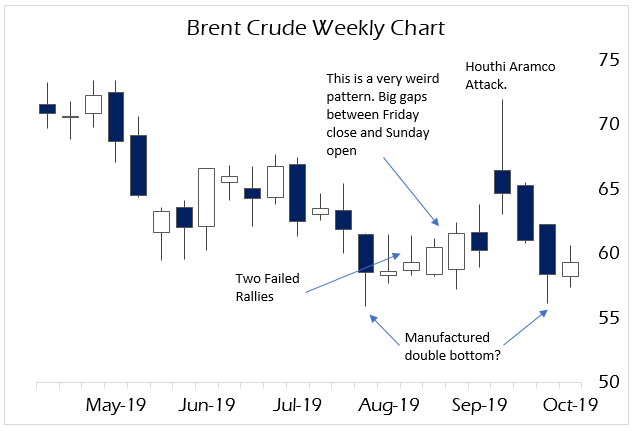 Someone doesn’t want Brent Crude closing much below $60 per barrel. The attack on Aramco was supposed to stabilize oil prices and kick off a wider conflict that would buoy oil prices. It didn’t because Trump isn’t an idiot and now there is real panic building politically as oil can’t rally.

With Trump fighting, successfully I may add, a ridiculous impeachment process by making goo-goo eyes at the stock market via Twitter on a Friday shouldn’t come as a surprise to anyone with working brain cells.

His need for a strong market and the lie of a strong economy is his best defense against the Negatron Nancy (Pelosi) and the Woke Patrol trying to convict him for their crimes.

And that’s why The Friday News Stream has become the best reality TV show in the world. The only question I have after this week is who gets thrown off the airwaves.

They already took out Jeffrey Epstein.