Home » Chart of the Day » Zombies Led November’s Rally, and That Should Scare You

Zombies Led November’s Rally, and That Should Scare You

Zombies are walking dead. They exist solely to destroy living creatures. At least, that’s the way it works in movies and popular television shows.

Investors must ask if zombies will destroy the living stock market as well.

A zombie company is one that doesn’t earn enough money to pay its interest expense.

According to Bloomberg, the list includes about 600 of the companies in the Russell 3000, an index of the 3,000 largest publicly traded companies.

Since the pandemic began, zombies added more than $1 trillion in debt and now owe a combined $1.4 trillion.

Remember that is debt the companies can’t afford to pay. Yet, investors seem to be ignoring the risks.

They’ve been buying shares of zombies, and weak balance sheet companies outperformed healthy companies in November. Indexes based on balance sheet strength are shown in the chart below. 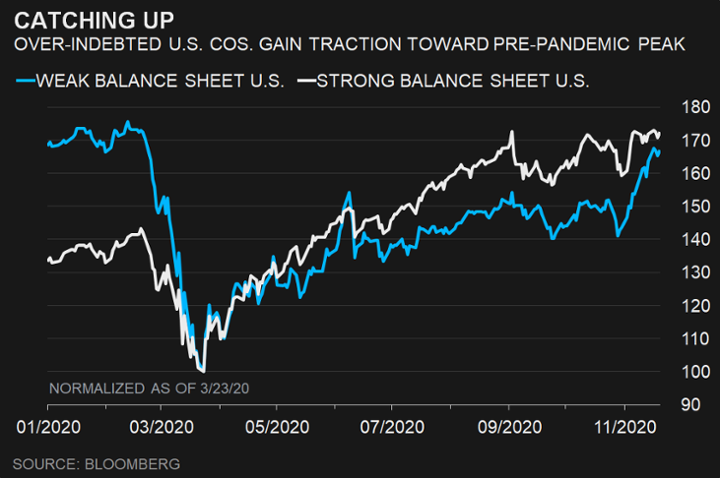 The BIS notes that Zombie firms tend to concentrate in cyclical sectors like consumer goods, entertainment, airlines and apparel. These are sectors that face additional risks if the economy doesn’t recover quickly.

The problem of zombie firms isn’t new. A BIS study of the life cycle of zombie companies indicates about 25% of the firms will fail, and about 15% will remain zombies for years.

As for the rest, “about 60% [of zombies] formally recovered from zombie status. However, recovered zombies underperform compared to firms that have never been zombies, and they face a high probability of relapsing into zombie status.”

Investing is difficult in a strong economy. Investors should strive to put the odds on their side. Right now, in a weak economy, that means avoiding zombies and buying companies with strong earnings and small debt payments.