Since stock prices bottomed in March, one index more than doubled in value — the NYSE FANG+ Index.

Now is the time to lighten up on aggressive stocks and move into conservative names.

These stocks are volatile and the index reflects that. FANG+ lost 37% in four weeks while the broad market crashed. It rallied 102% over the next four months.

Comparing FANG+ to the Dow Jones Industrial Average shows how aggressive investors are. The chart below shows that calculation. It also includes a momentum indicator of the ratio at the bottom of the chart. 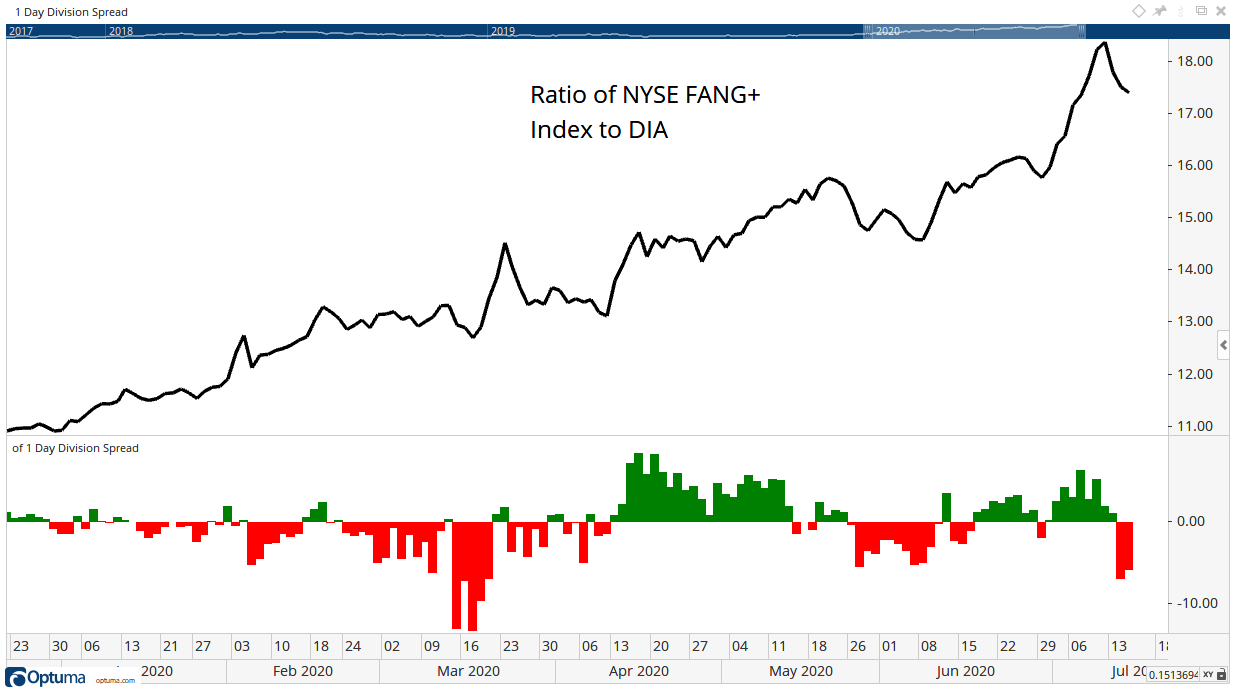 When the ratio is rising, it’s best to be aggressive. When the line is falling, the Dow is outperforming the Fang+ stocks. This is especially true when momentum turns negative, as it did on July 14.

Momentum was negative throughout February and March as major indexes dropped more than 30% in the wake of the novel coronavirus pandemic. Momentum was also negative in May as the market’s advance stalled.

This ratio and its momentum don’t necessarily say it’s time to sell your Fang+ stocks. This chart is simply telling us the Dow is likely to outperform them in the next few weeks.

FANG+ stocks were led higher by Tesla, which gained more than 410% in in four months. That gain came as analysts raised their Tesla earnings estimate for 2021 by 7.5%.

Rationally, it’s difficult to believe that a 7.5% boost in earnings merits a price increase of 412%. Traders became irrationally exuberant about Tesla. The same is true for other stocks in the Fang+ index.

Now, we’re likely to see some profit taking in those names. As traders sell, they will have cash to reinvest. That money should rotate into other stocks, like the undervalued industrials in the Dow.

Now is the time to lighten up on aggressive stocks and move into conservative names.

This Gold Mining Stock Is Gaining Steam in the Bull Run