COVID-19 has been an unprecedented event. It’s the first global pandemic in the modern era, a time when compassion affects policy. That’s led to quarantines and economic shutdowns as protective measures.

Restrictions on societies have almost certainly reduced the toll of the disease. But they also carried a steep economic cost.

This month, the Bank of England provided a new perspective on how deep the blow to global economies has been.

CNBC reported that “the U.K. economy contracted by 9.9% in 2020, its largest annual contraction since the Great Frost of 1709, as the coronavirus pandemic ravaged economic activity.

The 9.9% annual contraction is more than twice that seen in 2009 in the aftermath of the global financial crisis, and narrowly worse than the 9.7% slump during the crisis of 1921.”

In 1709, an unusually cold winter froze rivers around the country and effectively shut down the country along with much of Europe. Like today, the country was brought to a standstill.

The chart below shows other historic economic contractions for the U.K. and the difficulty of snapping back. 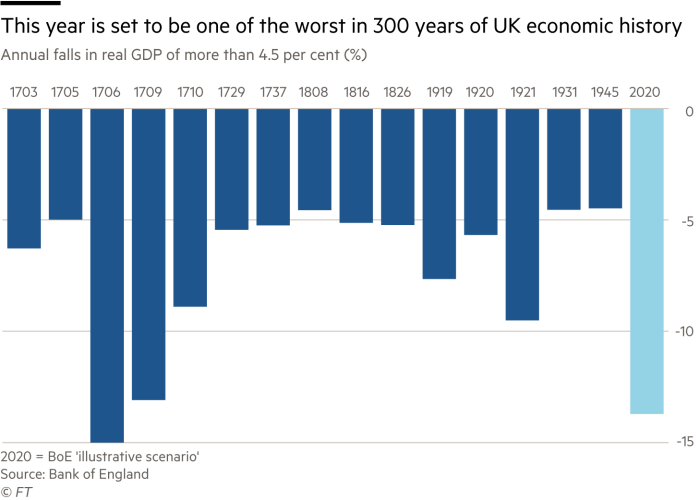 The only deeper contraction since 1700 occurred in 1706. That year, the War of the Spanish Succession turned Europe and its colonies into a battleground, and warring navies disrupted trade globally.

Wars are an example of structural change. Some of the industrial base is destroyed either by enemy attacks or because of inefficiencies that can’t be tolerated when national survival is at stake. New technologies developed to win battles lead to new economic activity in peacetime, but displaced workers from older industries need training to perform the new jobs.

This is a perspective many have ignored about COVID-19. Shutdowns created structural economic changes. Policymakers and economists don’t know what these changes are yet, but the economy of 2022 will undoubtedly be different from the economy of 2019.

What Ballooning Government Debt Means for the Stock Market