It’s Time to Worry About a Double-Dip Recession

If you watched Seinfeld, you might recall that time George Constanza double-dipped. He dipped a chip, took a bite and then dipped again. There are dangers to the double-dip, and George’s antics led to chaos.

The economy is poised to double-dip. And the results could be chaotic for millions of Americans counting on a recovery.

A reliable Federal Reserve model indicates a double-dip recession is likely. As shown in the chart below, the recent deep decline has just one precedent: the early 1980s. 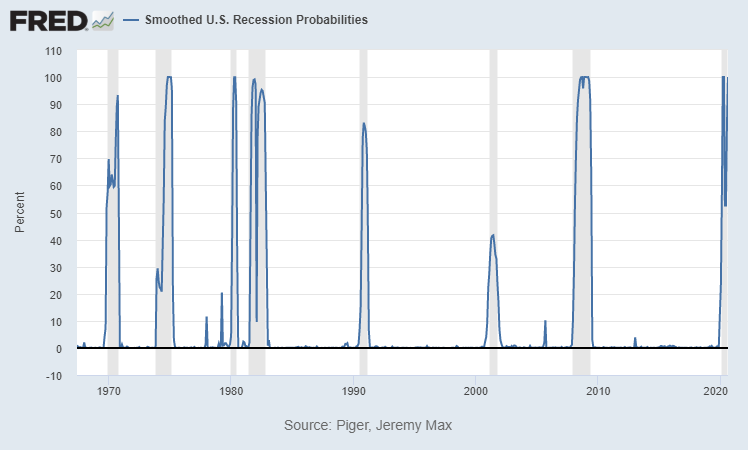 This model compiles many sets of data:

It’s designed to identify economic recessions. Since it was first published in 1998, the model has been highly accurate.

Identifying recessions in real time is a problem for economists. The previous recession, for example, ended in June 2009. The National Bureau of Economic Research didn’t confirm that until September 2010.

Lags of a year or more are common, but this model helps policymakers respond to conditions in real time.

This model has never generated a false signal. That means it’s likely the stimulus program dampened the contraction. But without more stimulus, a second economic decline is likely.

What a Double-Dip Recession Means for Investors

Let’s review the double-dip recession of the early ‘80s.

That contraction began in January 1980 and lasted just six months. About a year later, in July 1981, a deeper recession began. The second dip lasted 16 months.

A similar pattern may unfold this time. Policymakers failed to address economic problems with the first stimulus package. They simply boosted short-term growth.

And there are many economic problems that remain unsolved:

Those problems are now causing a second recession, assuming the first one ended.

Conservative investors should remain defensive as the double-dip recession threatens the bull market in stocks.