Don’t Call This an “Economic Recovery” Just Yet

With all the talk of good economic news, an important fact is overlooked: The V-shaped recovery has recovered just 50% of its losses.

When the economy shutdown began in March, a recession was already underway.

Federal Reserve policy was stimulative at the time, and the Fed simply stepped on the accelerator.

Congress stepped up and supported the Fed with a massive stimulus program.

Thanks to $1,200 checks and enhanced unemployment benefits, by April, consumers had more income than they did early in the year.

The government drove the V-shaped recovery entirely — and as these programs stopped supporting families, the recovery stalled.

For economists and investors, this is an important question: How much did all that stimulus allow the economy to recover?

The answer may be: surprisingly little.

That will disappoint both policymakers and investors.

The chart below shows an important measure of recovery.

It’s the number of people between the ages of 25 and 54 who are employed. The recovery stalled after half of the jobs lost were replaced.

Recovery Stalled With 50% of Jobs Replaced 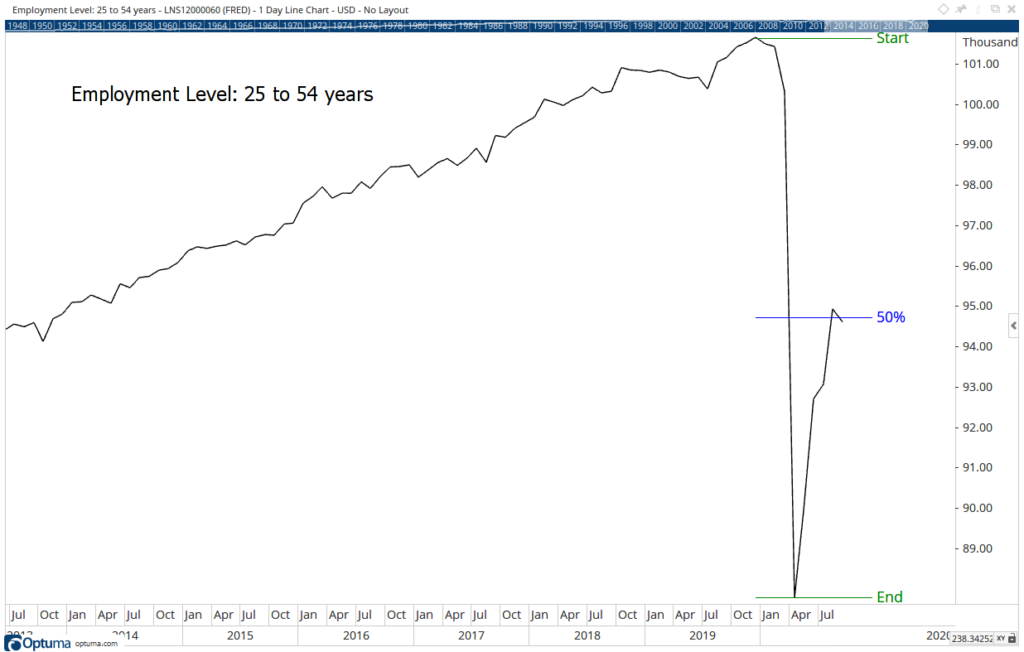 This age group accounts for nearly two-thirds of the labor force. Economists believe it gives the clearest indication of the health of the labor market because it minimizes the effects of age on employment.

Before age 24, many people will move in and out of the labor force to attend school. After 55, many will retire or leave the workforce for health reasons.

Before the recession, more than 80% of people in this age group were employed. Now, just 75% are employed. This is the lowest level since the economy began to recover from the 2009 recession.

This data confirms that the recovery is stalled. The economy is also far from its potential capacity.

Until job losses recover for this age group, the economy will remain in recession.

Looking ahead, 2021 will be challenging for job seekers and investors.