After years of struggling to push inflation above 2%, the Federal Reserve is changing how it measures inflation.

Policymakers and consumers measure inflation by comparing today’s prices with the price in the past. The chart below is the one-year rate of change of the Consumer Price Index, an official inflation gauge.

Not Easy to Manage 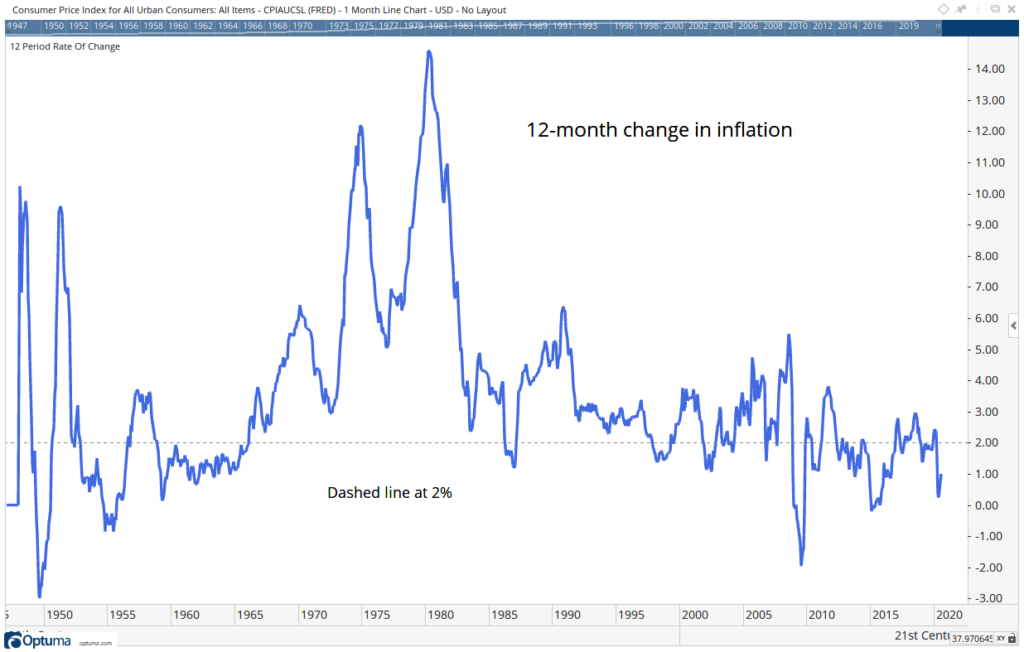 In the future, the Fed plans to use average inflation. When the number is stuck below 2%, like it is now, the Fed can be more aggressive. This should unleash inflation.

The plan is this: When the Fed decides inflation should drop, policy changes will push it back below 2%. The average will be 2% in the long run.

The History of Inflation

The chart above shows that it isn’t easy to manage. Inflation spent most of the last 12 years under 2%. It was above 2% for the 40 years before that.

It was difficult to control once it raced above 2% in 1966. Increased government spending triggered price gains.

After that, a wage-price spiral developed. Prices moved up. Wages increased to match higher prices. Then, prices moved up again. Wages rose, trying to match prices. That continued for years.

To stop the spiral, the Fed raised interest rates. Long-term rates were above 15% in 1981. Short-term rates peaked at 22%.

High rates broke the inflationary spiral that lasted 15 years. Tighter Fed policy set up the bull market in stocks that ran through 2000.

A generation later, investors have forgotten about the pain. So, the Fed will change its policy to make inflation more likely.

Chances are the results will be the same. Once it starts, inflation will set off another wage-price spiral.

The good news? We should all be getting raises.

The bad news? The money will buy less than ever.

Beyond Netflix: The New Leaders of Stay-at-Home Stocks

How Zoom Stock May Signal the Economic Recovery