Home » Chart of the Day » Could the U.S. Help Rebuild the Global Economy Again?

Could the U.S. Help Rebuild the Global Economy Again?

In the fiscal year that ended September 30, the federal government spent $3.1 trillion more than it took in. Total revenue of just $3.42 trillion offset spending of $6.55 trillion. Debt made up the rest.

Experts and policymakers agree the shortfall was due to the government’s extraordinary response to COVID-19. According to The New York Times, this was necessary:

“That spending was crucial to preventing families from falling into poverty and keeping businesses afloat.”

Other research leads to questions about spending. Much of the government’s stimulus was used to shore up family balance sheets.

New research from the Federal Reserve released this week showed that Americans used one-time stimulus checks to save money and pay off debt.

Households spent just 29% of the money they received earlier this year, according to the Federal Reserve Bank of New York. Another 36% of the cash was saved, while 35% was used to pay down debt.

While families benefit from lower debt and higher savings, government spending reached levels not seen since World War II. The chart below shows the fiscal year deficit relative to the size of the economy. The economy is measured with the gross domestic product (GDP). 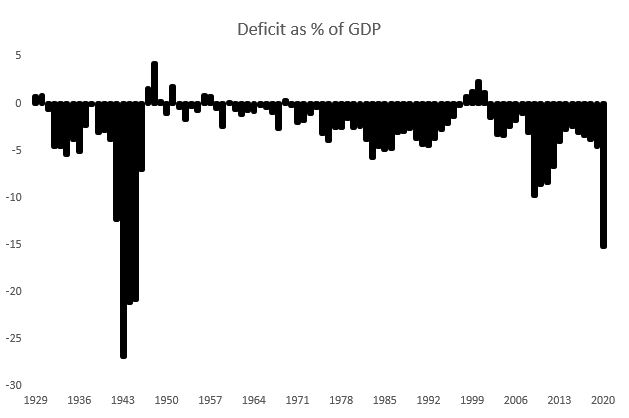 This chart allows for comparisons from one year to the next since inflation makes it impossible to compare spending in dollars. In 1945, spending for World War II peaked at $92.7 billion. Congress considers that amount inconsequential today.

War required several years of large expenditures. It also destroyed much of Europe and Asia. The U.S. then paid down the debt by rebuilding the world.

Now, it’s possible the U.S. will help rebuild the world damaged by a pandemic. This would allow the global economy to rebound and could be the basis of a multi-year bull market.

That’s all possible. We just don’t know if that will happen. For now, all investors can do is hope everything will be OK. 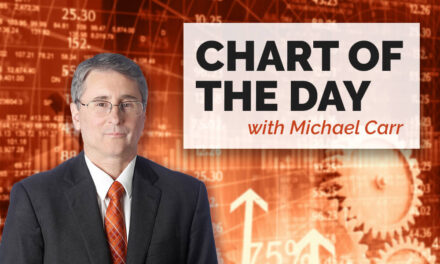