Robert Shiller is probably best known for the Cyclically Adjusted Price Earnings (CAPE) ratio. This measure averages earnings over 10 years to reduce some of the short-term fluctuations of market cycles.

CAPE is at its third-highest level in history. It’s only been higher in the 1920s, before the Great Depression, and in early 2000, just before the internet bubble popped.

But that’s not Shiller’s biggest worry.

Shiller’s Crash Confidence Index is also at a record level. That index is based on a single question:

“What do you think is the probability of a catastrophic stock market crash in the U.S., like that of Oct. 28, 1929, or Oct. 19, 1987, in the next six months, including the case that a crash occurred in the other countries and spreads to the U.S.?”

The history of this index is shown below. 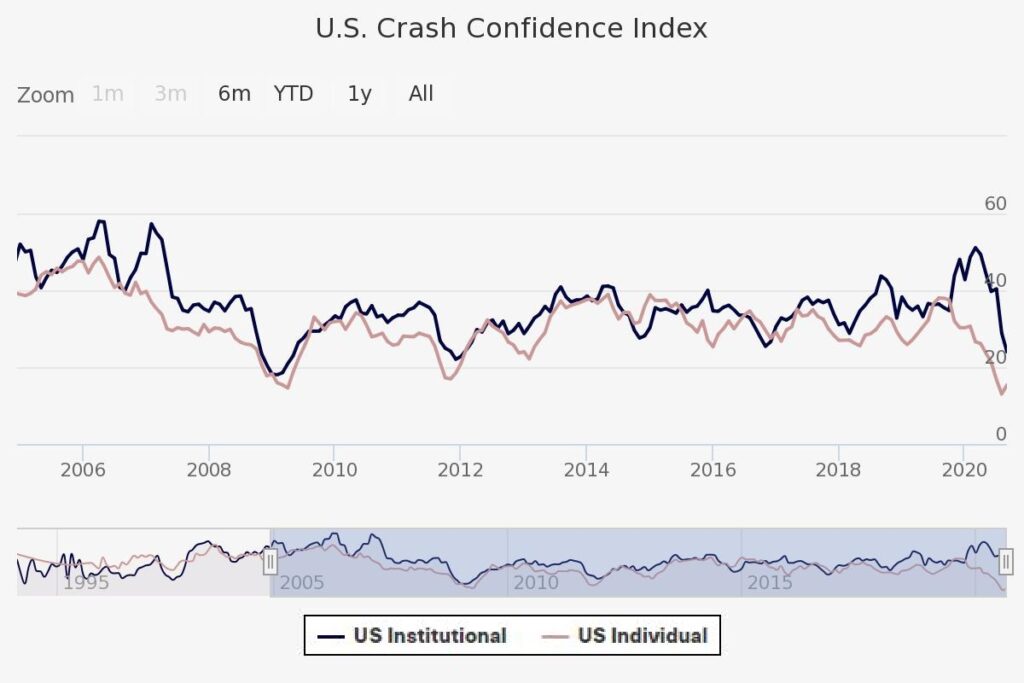 The index shows the percentage of monthly respondents who think the probability of such a major crash is less than 10%. It’s a six-month moving average, which helps identify a trend.

In August, the percentage of individual investors with that level of confidence in the market hit a record low, 13%. The most recent reading in September, 15%, was still extremely low.

Institutional investors — people who make decisions for pension funds, mutual funds, endowments and the like — were a bit more confident, with a September reading of 24%. But that’s extremely low, too.

In short, an overwhelming majority of investors said there was a greater than 10% probability of an imminent crash — really, a remarkable indicator that people are quite worried.

Or, as Shiller explains:

“No one knows the future, but given the general lack of investor confidence amid a pandemic and political polarization, there is a chance that a negative, self-fulfilling prophecy will flourish.”

Could the U.S. Help Rebuild the Global Economy Again?

Volatility May Be the Best Pre-Election Trade