Home » Stock Market Updates » Hong Kong as We Know it Ends With US, China on Brink of New Cold War 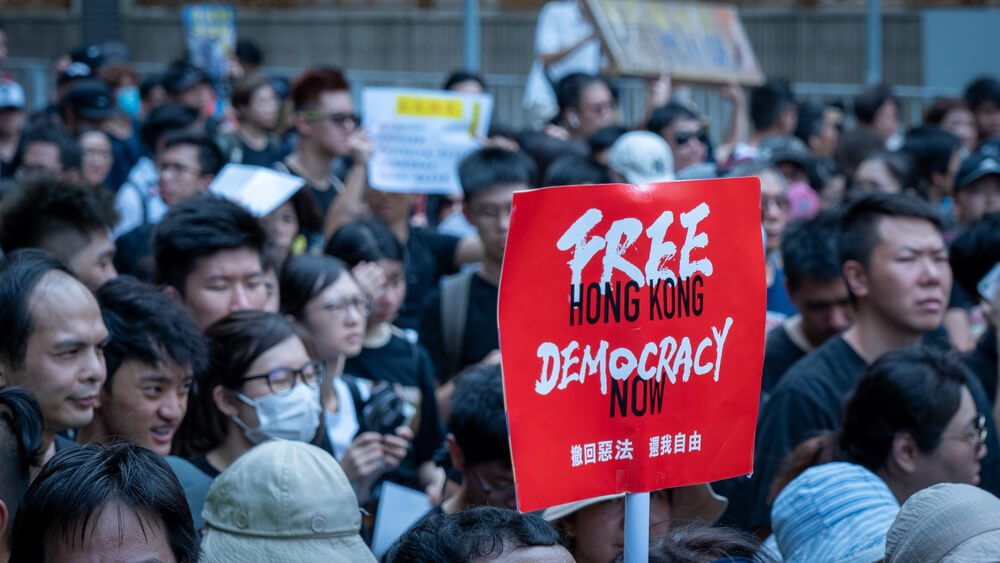 Both Beijing and the U.S. are tired of each other’s provocations and we are now in a state of open economic and diplomatic warfare. The only thing that comes next is direct military conflict.

The Hong Kong we’ve known for generations is gone.

China upset all the apple carts Thursday by announcing a new security law which completely bypasses the local legislature. It’s being hailed as the end of the “One Country, Two Systems” policy that has been in place since the British turned Hong Kong over to China 23 years ago.

Markets roiled. Safe-haven assets like gold and bitcoin stopped their slides into the weekend. The dollar strengthened and stocks stopped their march higher.

You would think for a moment this big news there would have been a bigger response. But we live in a world soaked to the gills in monetary heroin. I guess a $15 bounce in gold is all we can hope for.

But truly this is a big moment.

Because if U.S. President Donald Trump has reoriented our Cold War policy from Russia to China, then it is only natural that China’s response would be to shore up its own backyard.

The subtext here is that China feels (or knows, let’s be honest) that last year’s protests against the extradition treaty were as much an attempt at a color revolution as anything we’ve seen. It just happened to not be successful.

And my analysis at the time was that this was a move by the U.K. to avoid exposing British intelligence assets embedded deeply in Hong Kong’s banking sector, laundering money to fund destabilization operations around Asia.

It made no sense that China would invite that amount of bad press just to punish students twerking in a public park. No, those protests were about something far more important than that.

This move by China is downstream of this. Both it and the U.S. are tired of each other’s provocations and we are now in a state of open economic and diplomatic warfare. The only thing that comes next is direct military conflict.

The End of Hong Kong as We Know it

For more than a year there has been an exodus of old money out of Hong Kong, prime real estate held for generations getting sold in anticipation of major political change.

And anyone following the situation there knows that Hong Kong’s obscene property market is a bubble that will eventually pop.

Welcome to the Coronapocalypse and the popping of the “Everything Bubble.”

The key here is that the Hong Kong Monetary Authority has maintained a peg of the Hong Kong Dollar to the U.S. dollar for 37 years. Martin Armstrong was the first to bring up what the real threat to markets is over this new security law, the breaking of that peg.

Traditionally, when a nation pegs its currency to another, then the differences in market interest rates should be marginal at best. However, this interest rate spread between the greenback and the Hong Kong market rates is warning that the economic differences are surfacing. The demand for the Hong Kong dollar is shifting, and this brings the currency in short supply given the economic contraction due to the virus. Add this new political shift and the Hong Kong Monetary Authority will have little choice but to increase the supply of Hong Kong dollars in an effort to support the economy and try to prevent interest rates from rise in the face of a new political risk.

Martin is correct about this. Here’s a look at what he’s talking about. 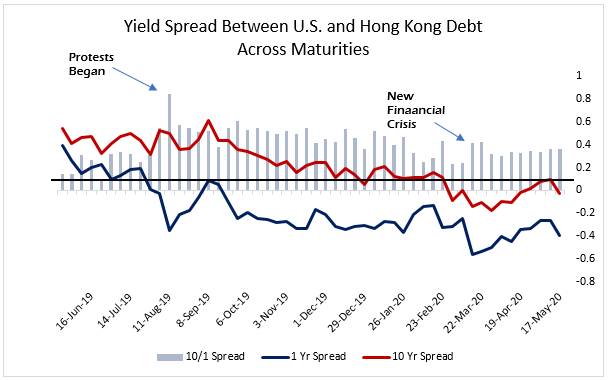 The first thing to note is that rates in the U.S. have been falling faster than in Hong Kong, indicating tremendous demand for the U.S. dollar. Every spasm in these spreads is an indication of short-term stress to the peg. And the wider the spread gets across maturities is an indicator of fundamental change in the character of the demand for the currencies.

And despite the U.S. Federal Reserve dropping rates to near zero, which has helped Hong Kong maintain the peg, as Armstrong pointed out, the maturity spread between U.S. and Hong Kong debt is widening again. Because there is now short-term risk as the debt gets sold to raise cash locally.

This will put serious upward pressure on the Hong Kong dollar and all the HKMA can do is flood the system with money as demand for the currency rises.

That spread across maturities should blow out wider as the situation on the ground worsens and there is upward pressure on the Hong Kong dollar due to the collapse of the global economy. Short-term rates will rise faster than long-term rates, and this could happen while rates in the U.S hold serve or continue to drop.

There is no way the HKMA can maintain the peg under those conditions.

Right on cue there are protests against China’s pronouncement getting hastily organized for this weekend. So this weekend will be a big deal in the history of Hong Kong markets, and I wouldn’t want to be short the Hong Kong dollar until after the peg breaks and the market rebalances.

Because when — not if — the peg breaks it will be because of this increased demand thanks to insane levels of property debt. Hong Kong blew a massive property bubble maintaining the peg to the U.S. dollar, which is why property values there are through the roof and people live in shipping containers.

They were able to do this because of its status of a free state adjacent to the fastest-growing economy in the world over the past 40 years. Demand for Hong Kong property will fall as China takes more control of the city and prices readjust down.

The old China growth story is over for now and that means a complete revaluing of Hong Kong as a destination for global capital because this is a different world than it was just two months ago.

And that means ending another currency peg that acted as a vector for corruption of global markets and global politics.

Depressions exist to sweep away the fake and reassert the real. 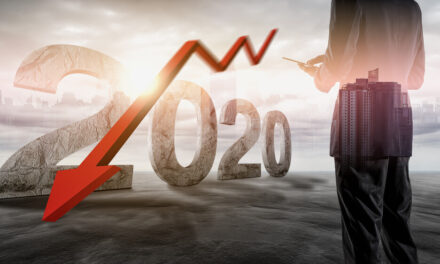