Luongo: Oil Collapses as Trump Comes to His Senses 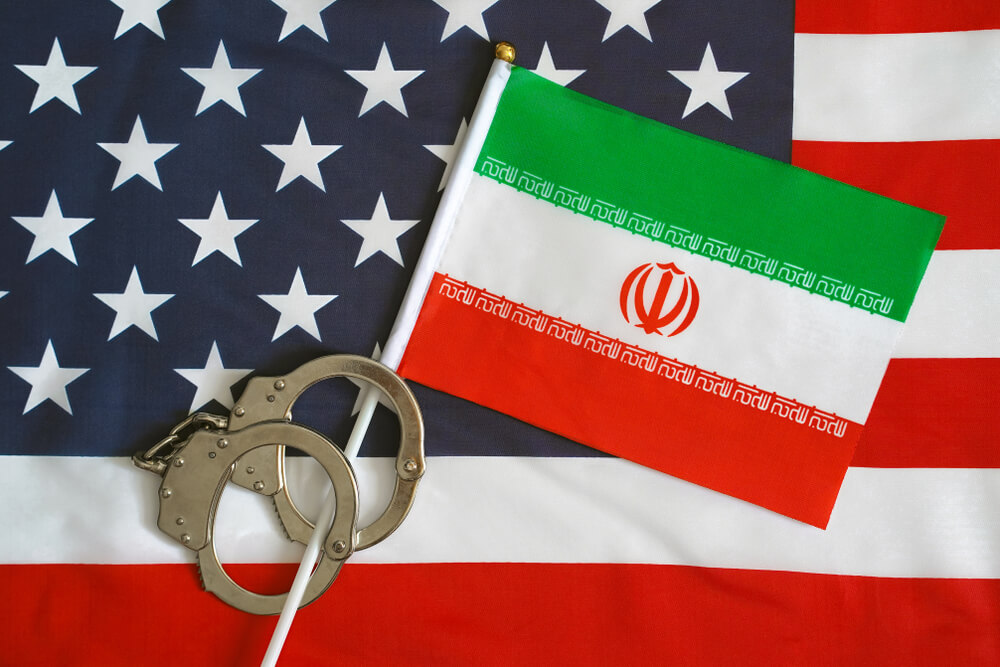 If there was ever a moment where oil bulls wet themselves, it would have been when it was leaked that Senator Rand Paul, R-Ky., was dispatched to talk with Iranian Foreign Minister Javad Zarif.

Paul, like his father, Ron Paul, is a staunch non-interventionist on foreign policy. And Trump deploying him now to get Iran to come to the bargaining table is as clear a signal that he’s looking to change the course of his foreign policy as there has been.

With the potential for a hot conflict between Iran and the U.S., receding oil markets can get back to the reality that the global economy is a mess and getting messier.  Brent Crude prices fell back below $62.00 per barrel in the aftermath of the news. 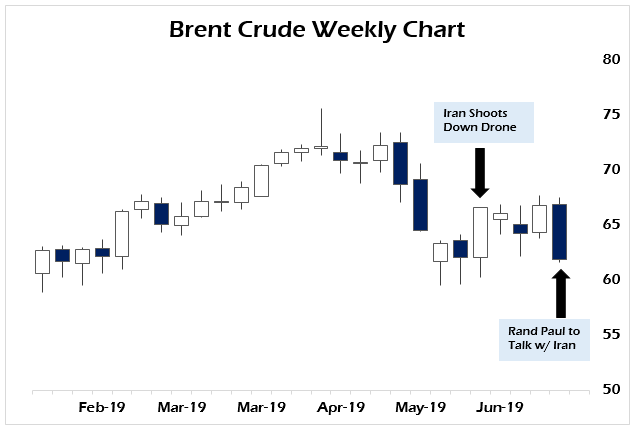 And that breakdown in price is significant. Because if the news of Iran shooting down the drone was enough to throw a technical weekly reversal up for oil last month, this news constitutes the unwinding of that reversal signal to the downside.

The OPEC Plus decision to extend production cuts has done little to support the price as Trump has step-by-step deescalated his foreign policy around the world since the G-20 meeting in Osaka. Neither have clear provocations creating the impression of tension on the high seas surrounding oil shipments has moved oil’s needle either. British authorities in Gibraltar seized an Iranian tanker. A UAE-related tanker goes missing in the Strait of Hormuz.

Now Iran has seized a ship it says was running under a UK flag smuggling fuel (turns out the flag was Panamanian).

It doesn’t matter who says what about whom in these cases. Iran is likely lying about some things while the U.S. and the UK are lying about others. My read on this is that the UK, along with other interested parties — Saudi Arabia, Israel and the war-hawk factions within the Trump Administration — are trying to keep the conflict in the news and the potential for a mistake high.

By doing this, the main goal is to prevent diplomacy from taking place. This is no different than the myriad of flashpoints between the U.S. and Russia over the past three years. And this brings us right back to Rand Paul’s mission to meet with Zarif while he is in New York conducting meetings at the United Nations.

Because to understand where oil is headed, we have to parse what the potential pitfalls to either war or peace are. At this point, the fundamentals are poor. For all intents and purposes oil is in a bear market, having pulled back nearly 27% from the most recent major high in September of last year.

The IEA’s first-half report for 2019 has the world currently in sincere oversupply at 0.9 million barrels per day. And this is with both Iran and Venezuela’s exports more than halved in the past year and OPEC Plus agreeing to substantial production cuts.

Germany’s economy is literally falling off a cliff. The rot in ours is hiding behind mixed economic data thanks to continued slow-drip capital flight from Europe and emerging markets.

When viewed against that backdrop, is it any wonder that the Trump Administration has been so belligerent toward Iran? We have a fracking industry continuing to bleed red ink that is only supported by suicidal pension funds buying their high-yield junk debt in the vain hope to stave off a defined benefits meltdown of monumental proportions.

In a world where 3% positive yield spread is practically a license to print money (just ask Italy, who can’t sell its insanely over-priced debt fast enough), the search for 7.5% yield needed by most pension funds is a desperate one.

And while a lot more wells drilled today are profitable at far lower prices than during the last fracking boom, it’s still not enough to show positive free cash flow at sub-$75 per barrel. So, oil prices reaching back down for the $40 handle is not something anyone on Wall Street or on the CALPERS board of directors wants to consider.

Hence, Trump’s attempts to remove a few million barrels of oil from the market to replace their market share with ours, and let the Saudis take whatever is left over.

But, by contrast, anyone who thought Iran, Russia and China would take this lying down has a case of terminal naïvete. And that’s where we are today. We’ve reached the limit of this policy. It will only take so many barrels of Iran’s oil off the market without there being unacceptable consequences.

Without going too far afield here, Iran and its allies have the ability to turn the Arabian peninsula in to a multi-front war of a kind that would cripple the world economy, topple governments and create untold havoc in the financial markets.

This is what Trump finally responded to when he called off the air strike on Iran last month. All of these moves since then have been downstream from that moment.

And the oil markets counting on cooler heads prevailing turned out to be the right call. Look for Brent to re-test the recent lows near $60 and potentially go lower on more bad economic news coming from Europe and/or China. If these feints toward war couldn’t get a breakout in oil prices, at this point I have to wonder what will?

I expect no breakthroughs with Senator Paul, but someone has to go to Tehran just like Trump went to North Korea and start the process. 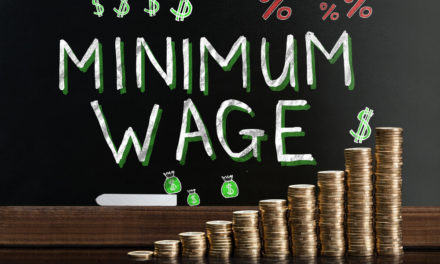