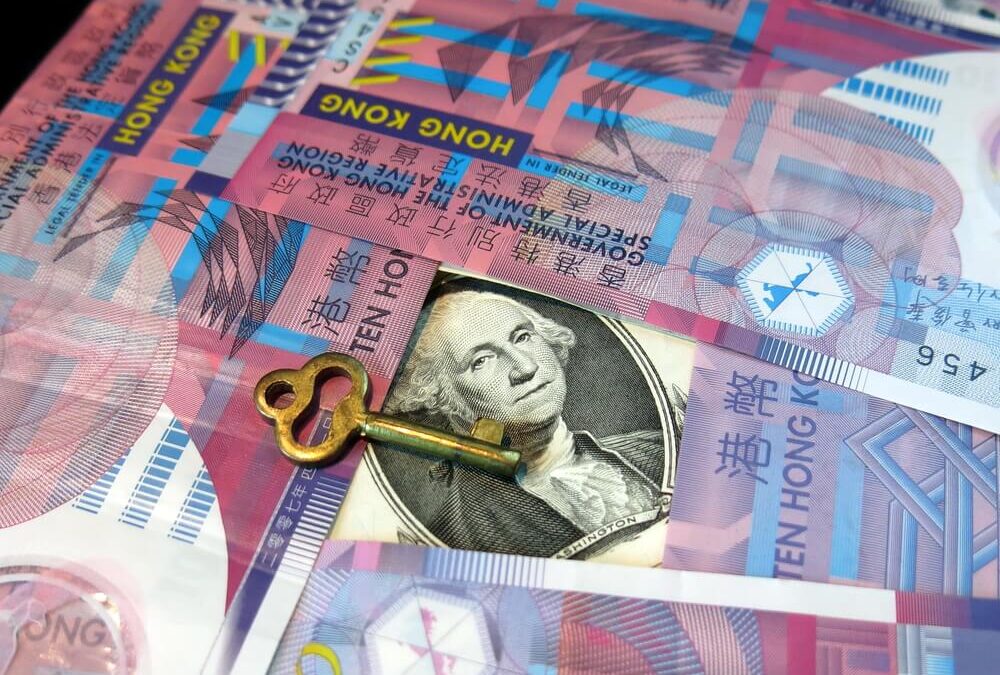 Weaponizing the dollar is the nuclear option as it creates short-term pain but long-term losses.

President Trump openly threatened the peg of the Hong Kong dollar to the U.S. dollar this week. This is in support of a major sanctions bill that is awaiting President Trump’s signature regarding Hong Kong.

Congress passed a new sanctions bill for Trump to sign which would sanction any bank that complies with China’s new security law in Hong Kong. Trump has already removed Hong Kong’s special trade status over China’s increasing control over the city-state.

And the questions on everyone’s mind is whether he is:

Let’s go back and set the political stage. Bear with me.

How the Hong Kong Situation Started

Tensions over Hong Kong seem to rise daily, but they began with China’s extradition rule passed last year by Hong Kong’s government. That sparked big protests across the city, which turned decidedly anti-business before the outbreak of COVID-19.

I’ve been on this story from the very beginning, noting that the protests were part of an overall strategy to turn the world against China and that Hong Kong would and should be sacrificed to a violent put down of domestic terrorists. In an article published in October 2019 I noted that the U.S. was signaling this strategy through its media mouthpieces in the city.

Jimmy Lai [publisher of the Apple Daily and the CCP’s chief critic in Hong Kong] is telling you what the strategy is here. The goal is to thoroughly undermine China’s standing on the world stage and raise that of the U.S. This is economic warfare, it’s a hybrid war tactic. And the soldiers are radicalized kids in uniforms bonking old men on the heads with sticks and taunting cops.

Sound familiar? Because that’s what’s going on in places like Portland, Oregon with Antifa. Except in Portland the government is the one turning a blind eye to the growing violence in pursuit of the cause.

When China began its political moves to rein in Hong Kong as a source of offshore dollar liquidity with the extradition law it struck me as odd that such a massive protest would rise up. Once the organic nature of it died down, the street violence ramped up. It’s the same tactic on display across the U.S. today over racial violence directed at the police.

This background is necessary to understand why Trump and Congress continue to go ballistic over changes to Hong Kong’s security arrangements with Beijing. China is moving on consolidating control over the city.

The U.S. and the U.K. use the city as a major conduit of funds flowing through U.S. and British banks to fund all manner of operations around Asia, not all of which are, shall we say, above board.

There’s an intelligence angle to this that is unmistakable. That’s why this standoff has moved to this stage.

But the problem is that the black bloc protests didn’t succeed in either provoking China into another Tiananmen Square moment or stop it from further clamping down on the violence and insurrection.

China upped the ante by introducing its even more stringent security law in the wake of the protests, which, by the way, 80% of Hong Kong residents are not against.

So, the only move left is sanctions and threats of cutting major Chinese banks out of the SWIFT electronic clearance system. SWIFT provides secure transactions for almost 11,000 financial institutions around the world.

And that’s where we stand today. Congress is again abusing the Global Magnitsky Act to target individuals under the cover of “human rights violations” to threaten banks with fire and brimstone to maintain our position in Hong Kong.

So, now that we’re caught up, let’s answer those questions I posed earlier.

When Will the Hong Kong Dollar Peg Break?

The consensus among market pros is that Trump et. al. cannot meaningfully threaten the Hong Kong dollar peg for a variety of perfectly logical reasons. This article at Bloomberg goes over the conventional wisdom quite effectively.

The main points are:

But these are FX strategists who think only in terms of short-term gains and losses. They think like traders, not politicians or geopolitical strategists.  And this is why during big moments like this they are invariably wrong.

If the peg breaks tomorrow (highly unlikely) they’ll all get quoted saying: “No one could have seen this coming.” Confirmation and normalcy bias are powerful things.

But no one is looking at the other side of the equation: China. Why wouldn’t China keep pressuring its position in Hong Kong and force the moment to its crisis point? Hong Kong is a source of U.S. regional strength. And the peg provides the U.S. with continued leverage through the prevalence of the U.S. dollar in the region.

Remove that and business in Hong Kong:

So, to me, it seems perfectly logical from a war footing, which China and the U.S. are in mind you, for China to keep pushing the U.S. out of Hong Kong.

And that’s why I think the peg will break a lot sooner than the analysts quoted by Bloomberg expect.

How This Impacts the US Dollar

The one thing that no one in the world wants right now is a rising U.S. dollar, except maybe China, because everyone else is sitting on massive U.S. dollar liabilities. China needs a convenient excuse to ramp up Yuan liquidity and lower the USD exchange rate to broaden Yuan usage worldwide.

If the U.S. moves to kick China out of SWIFT, and sanctions banks over Hong Kong, it will only further alienate people from using U.S. dollars overseas. Weaponizing the dollar is the nuclear option as it creates short-term pain but long-term losses. It raises the costs of using dollars to an unacceptable level.

With markets in a tenuous state, and the world economy on the verge of further collapse, the odds of a rising dollar later this year are rising. We’re in the eye of the storm with dollar stress ebbing right now.

The last time I discussed the Hong Kong peg for Money & Markets, I mentioned that we should be watching the interest rate differential between Hong Kong and U.S. debt across the yield curve. 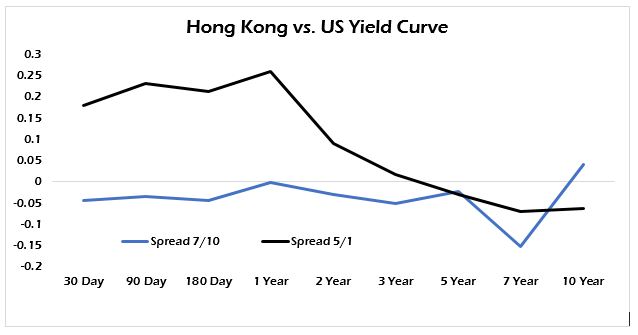 The HKMA’s ability to defend the peg was contained in the rate differential. Now that’s gone and inversions in both the U.S. and HK yield curves exist between two and three years, signaling rising short-term liquidity troubles.

This happened because of the upward pressure on the HK dollar thanks to uncertainty and a troubled property market. This is why the HK dollar has bottomed out to the strong end of the exchange rate band. Local demand is through the roof. All the HKMA can do now is print because rates are now below U.S. rates across the entire yield curve.

And now the HKMA has started expanding its balance sheet to increase the HK dollar supply. The problem for them comes when the U.S. dollar begins to rise, and they have to start selling their forex reserves to maintain the peg.

That’s only going to get worse if the U.S. sanctions Hong Kong banks and/or keeps trying to withdraw U.S. dollar liquidity. Hong Kong’s property market is an obscene bubble and the dynamics for capital inflow are reversing in U.S. dollar terms.

It doesn’t matter how much “dry powder” the HKMA has. The trend is in place. The U.S. and China relationship is changing. And China is now motivated after the U.S. and U.K. tried to stage a coup last year in Hong Kong. China wants to:

Lest anyone think I’m advocating for one side or the other here — I’m not.  Both the U.S. and China are dirty here. But this is war — and war has casualties. During war, weapons are brought to bear which may hurt the user in the short term. They’ll also give the user a long-term strategic advantage that can’t be immediately measured on a profit/loss ledger.