Bearish indicators are easy to find right now. Fundamentals are weak but prices keep going up. This is a speculative stock market that looks like a bubble. Since bubbles end badly, there are reasons for caution.

But one indicator is on a buy signal. It’s a long-term indicator that has an excellent record of calling tops. This indicator, the advance-decline line, alone justifies buying stocks right now.

The advance-decline line (A-D line) subtracts the number of stocks that close lower every day (declines) from the number that end the day higher (advances).

The A-D line simply counts how many stocks are going up. In a bull market, we expect most stocks to be going up. In a bear market, the majority of stocks should be going down. Basically, each stock gets one vote with this indicator.

In the past, near market tops, we saw fewer stocks going up. At those times, major indexes kept moving up because just a few large stocks were producing gains.

That means we should watch the A-D line for an advance warning signal of the next bear market since the indicator usually turns down before stock prices break.

The chart below shows the A-D line for the New York Stock Exchange. Dashed lines mark times when the S&P 500 topped before a 15% decline. Before four of the six declines shown, the A-D line was in a clear downtrend. 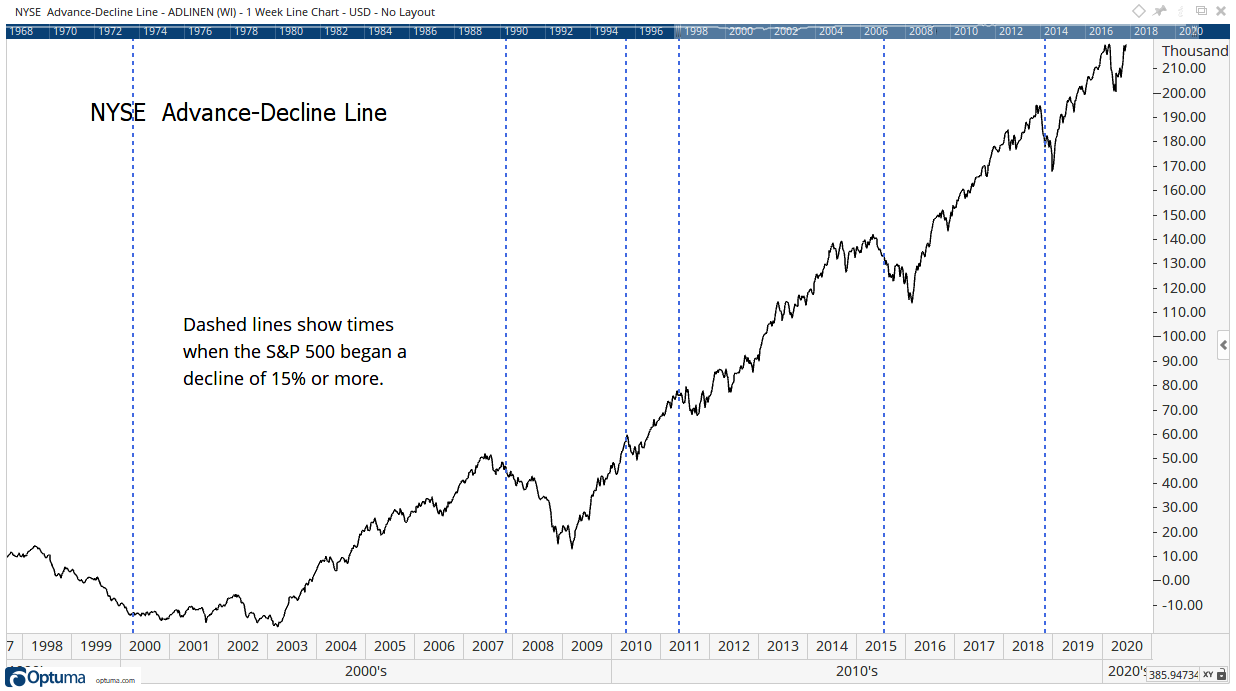 The two times the signal failed, in 2010 and 2011, market downturns were brief. The Federal Reserve was rapidly expanding the money supply at those times.

A-D line downtrends started months before the 2000 and 2008 bear markets. These were also times when the Fed was not rapidly expanding the money supply.

With the advance-decline line reaching new highs, the stock market should be expected to rally. But this can only happen as long as the Fed keeps pumping money into banks so they can funnel it to stocks. Otherwise, fundamentals will push prices down like we saw in 2000 and 2008.

Editor’s note: If you’re looking for a simple options trading service that has averaged 39% returns per trade across 200 trades, check out Cycle 9 Alert, from my friend and colleague, Money & Markets Chief Investment Strategist Adam O’Dell.