Economists measure inflation, unemployment and hundreds of other economic indicators. They’re looking for data that helps forecast the economy.

Because truckers move products before the consumer spends money, truck traffic is a forward-looking economic indicator.

Economic indicators are useful but simply looking at trucks on the highway could be more effective.

Almost everything sold at Walmart Inc. (NYSE: WMT) — or any other store — arrives by truck. Many raw materials to produce the products also were shipped to factories by truck.

Because truckers move products before the consumer spends money, truck traffic is a forward-looking economic indicator.

Monitoring truck traffic could tell economists more about the economy than the widely watched unemployment report, which tells us what happened in the past.

Cass Information Systems publishes an index showing changes in truck traffic. The latest report indicates the worst could be behind us.

“Following what we believe was the trough in April, the Cass Freight Index showed some — but only little — improvement in activity last month,” the report reads. “The index for both shipments and expenditures remained at recessionary levels and came in more than 20% below May 2019.

“We were surprised not to see more of an up-tick; the re-opening schedule appears to have unfolded slower than we anticipated … We do not believe we will reach 2019 freight activity levels until 2021 (at the earliest) due to the significant rise in unemployment and other results of government intervention.”

Economic Indicators: Truckers on the Highway

The chart below shows an index of prices that truckers charge to move goods one mile. The index appears to have bottomed, which is a strong sign of a turnaround in the industry and the economy. 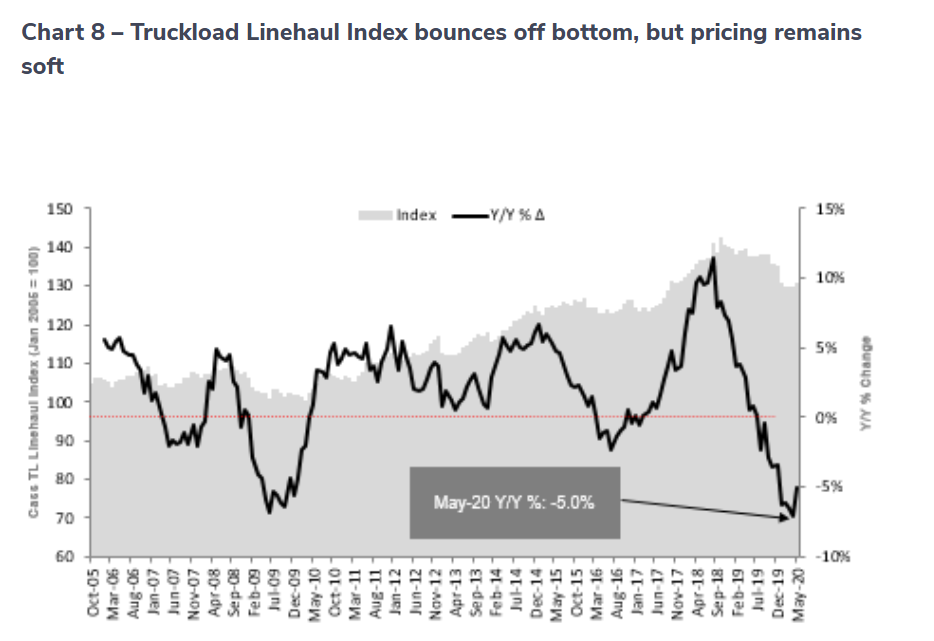 In the past, turns in this index preceded large gains in the trucking sector. In the most recent example from 2016, an index of truckers gained more than 60% in the year after the index bottomed.

While many investors are waiting for economic indicators and news to get better, aggressive investors should consider truckers, as they deliver the goods that will drive the economy to recovery.