We’ve all heard some businesses, particularly among the service sector, are recession-proof. Even in a recession, according to popular wisdom, people still get haircuts and other services.

In the strictest sense, it’s true. But it’s also true that in a recession they may get haircuts less often, seeing their stylist every eight weeks instead of six.

Changing the frequency of services reduces spending. This means services are no longer recession-proof.

But history shows there was a time when they were.

In fact, services withstood economic downturns for decades. The Bureau of Economic Analysis has collected data on consumer spending since 1959. For more than 30 years, spending on services fell on a month-over-month basis just twice, less than 1% of the time.

Even though declines are more frequent than there were in the past, the latest data is still unprecedented.

In March, as the coronavirus shutdown was beginning, spending on services dropped 10%.

The complete history of the data is shown in the chart below. The month-over-month change in percentage terms is at the bottom of the chart. 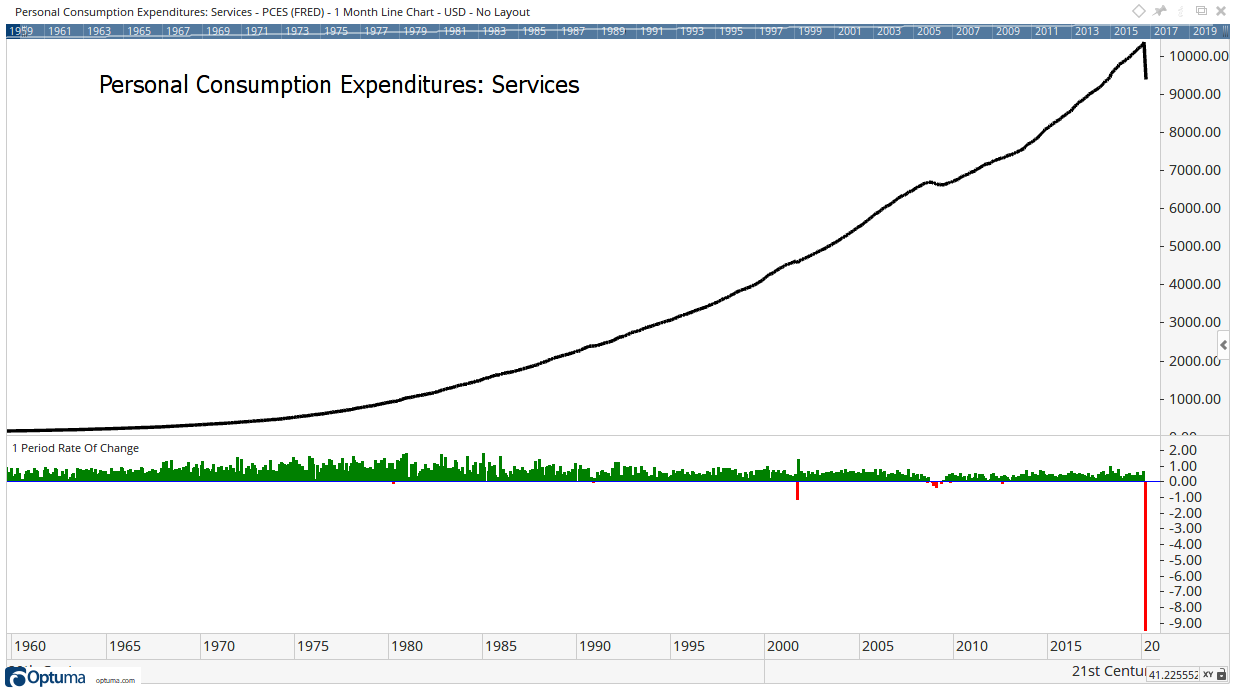 In dollar terms, spending in the service sector fell $987.6 billion in March compared to February. After 9/11, services spending fell $59.4 billion.

We already know April’s data will be bad. The size of the decline could even be bigger. Spending on services totaled $7.87 trillion in March. With the country almost completely shut down for the month, spending could have dipped below $5 trillion in April.

This is a bigger problem than some analysts realize.

Many businesses in the service sector are small. They include hair salons with just one or two chairs or pet groomers with room to work on one animal at a time.

Some of these businesses will not reopen. Others will operate at reduced capacity to meet social distancing requirements.

Some of those may reopen and fail in the coming months after finding new rules make business unprofitable.

Personal spending on services is another data point showing how deep this recession is. With spending falling in such an important part of the economy, recovery will be difficult.

Eventually, the economy will recover. But the recovery will be slow and there will be a second wave of business failures later this year.

It’s reasonable to start asking if the economy will endure a W-recovery with a second recession following the recovery from the current recession.

• Michael Carr is a Chartered Market Technician for Banyan Hill Publishing and the editor of Peak Velocity Trader and Precision Profits. He teaches technical analysis and quantitative technical analysis at New York Institute of Finance. Michael also is the former editor of the CMT Association newsletter Technically Speaking.

How to Minimize Risk and Play Gold’s Bull Market