As COVID-19 turned into a crisis, one word grew in popularity: unprecedented.

Looking closely, this economic crisis is unprecedented. The global economy has never shut down for a pandemic before.

But there is a precedent for the current environment. In July 1914, the global economy suddenly shut down as Europe’s great powers went to war with each other.

Like the current crisis, investors had time to act but ignored the warnings.

On July 23, Austria-Hungary delivered an ultimatum to Serbia with a long list of demands and a 48-hour deadline. Serbia couldn’t meet the deadline. Within days, the world was at war.

The chart below shows the Dow Jones Industrial Average at that time. The dashed line highlights the date of the Austrian ultimatum.

The Dow’s Reaction to World War I 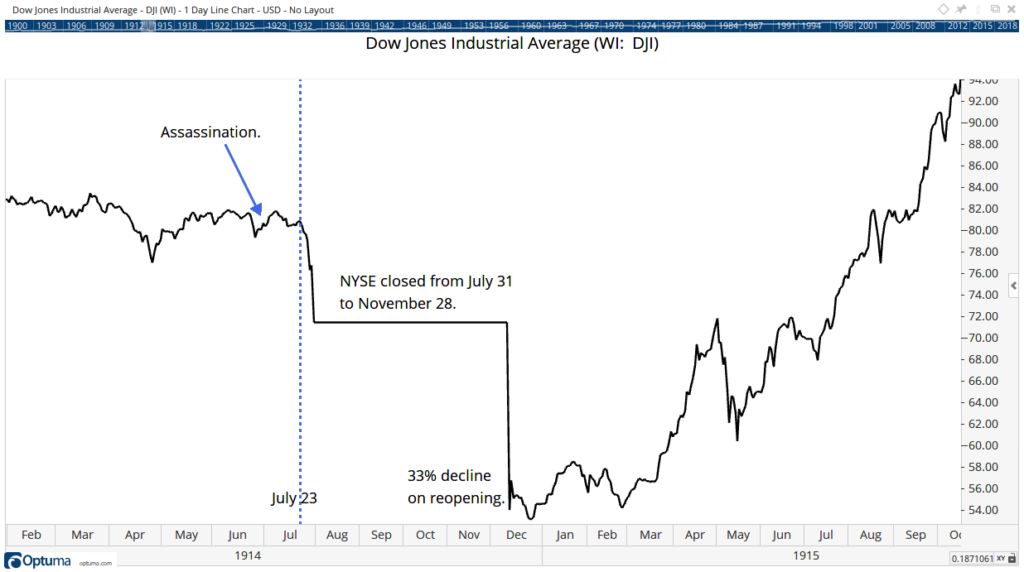 1914: Stocks barely reacted to news of the assassination. As talk of war increased, there was ample time to sell before the crisis hit stocks.

2020: Investors knew about the novel coronavirus for weeks before they panicked.

Another is the sudden decline in stocks after economies shut down. In 1914 and in 2020, financial markets simply locked up.

1914: The world was largely on the gold standard. It forced central banks to limit international trade to preserve gold. Staring on July 23, investors panicked and placed sell orders to raise cash in the face of an uncertain future and widespread capital controls.

These responses were rational. But everyone can’t sell at the same time. Stock exchanges in Europe responded by shutting down. The New York Stock Exchange (NYSE) closed on July 31, 1914, after falling more than 11% in a week.

The NYSE dropped another 33% when it reopened in November 1914. But it immediately stabilized at that level. Soon, it turned up. The Dow more than doubled by the end of 1916.

The rally coincided with the efforts of J.P. Morgan to finance the war. The Federal Reserve was less than a year old when the crisis began. So private bankers stepped up to facilitate international trade and rescue the global economy. They also made very large profits.

Government spending on the war against COVID-19 has been on the same scale as previous shooting wars. It remains to be seen if the current crisis will be as brief as 1914.