Home » Investor News » Gold Is Consolidating. Watch This Signal for an Explosion to the Upside

Gold Is Consolidating. Watch This Signal for an Explosion to the Upside 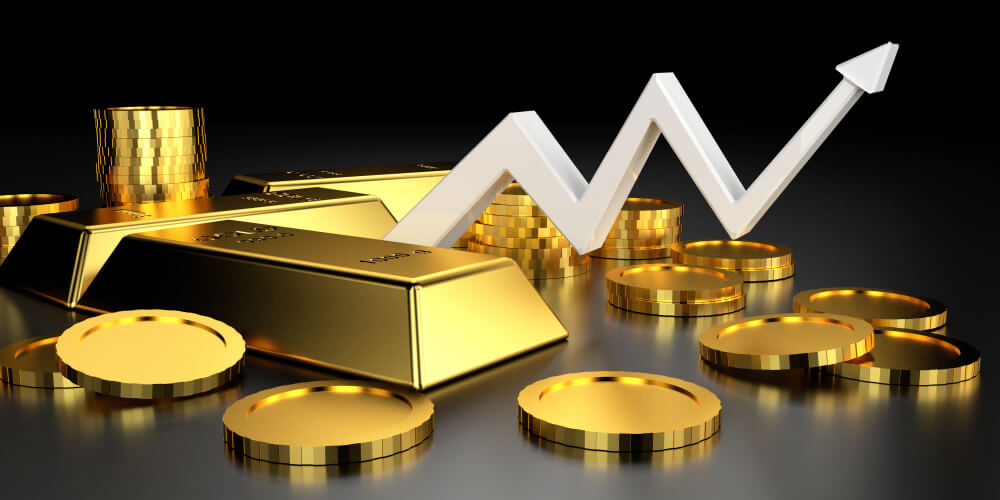 Low-volatility, inside bars on the weekly chart of gold usually imply something big is brewing. The price to watch is the close from the week of May 10, $1,743.00.

Earlier today the leadership of the European Union held yet another meeting to discuss the future of EU fiscal policy. And after another three hours of everyone restating their well-worn positions, no progress was made, publicly at least.

The issue for Europe is the need to create a permanent fiscal union, centered around an independent European Central Bank becoming the sole issuer of new euros, just like any other normal (sic) central bank.

In one corner are the so-called “Frugal Four” — Austria, Denmark, Netherlands and Sweden — who are adamantly opposed to commingling all the sovereign debt of the eurozone. In the other is, frankly, everyone else, who all want the EU to backstop and deal with their massive debt overhangs.

In the middle sits Germany with Chancellor Angela Merkel, who plays at being one of the Frugal countries for domestic consumption while promoting backdoor plans to push the EU toward a full fiscal union.

Merkel will be in control of the EU budget talks come July 1 as Germany takes on the rotating Presidency of the European Commission. That’s what these failed meetings between leaderships are all about — staking out positions for those future fights.

Earlier this week, the ECB conducted $1.3 trillion in TLTRO loan auctions at the ludicrous yield of -1% and -0.5%, which European banks scooped up to gain liquidity and a positive yield spread versus U.S. Treasurys and other higher-yielding sovereign debt.

The size of this auction was likely a reaction to the FOMC’s refusal to “go negative” last week with interest rates. The Fed, in effect, blew up the long euro/short dollar trade that has been in place the past few weeks. A trade that emerged, thanks to the Merkel/Macron proposal aid, grants for troubled eurozone members, the political and social unrest in the U.S. and the flood of money provided by the Fed in the weeks after March’s market spasm.

But since the Fed’s statement last week, the euro has topped, the dollar firmed and gold recovered its bullish bias within its current consolidation range.

The news from Brussels this morning, a quad-witching day no less, added a little more fuel to the rally in gold, as it looks to me like the “safe-haven” trade is back on.

I still feel that the problems in Europe become the epicenter of the next wave of this unfolding financial crisis. This Wolf Street article by Nick Corbshley does a great job of highlighting just how quickly Italy’s small and medium enterprise cash flow problems are soon to become all of Europe’s problems.

Long story short, there isn’t enough money, the money that has been earmarked for assistance hasn’t reached those most in need of it, and nonperforming loans (NPLs) are rising.

That will lead to political unrest if Prime Minister Giuseppe Conte can’t get a concrete result out of the EU leadership council. He’s enjoying a halo effect of the COVID-19 crisis that most leaders receive. His personal poll numbers are up, but that will only last so long.

This is why the euro is falling through $1.12 today and why it is likely it will continue falling back toward $1.10 by month’s end. It’s also putting mild upward pressure on sovereign debt rates, with German bunds suffering thanks to the sheer volume of issuance to finance fiscal stimulus packages.

All of these moves, however, are within well-established trading ranges and represent only gyrations within those ranges. There isn’t a clear signal yet as to what’s coming up next.

That said, the strength in gold versus the mild bounce in the dollar this week, I think, is significant. In fact, Money & Markets Chief Investment Strategist Adam O’Dell thinks gold is going as high as $10,000 over the next few years. Check out his presentation on why here.

Why Gold Has a Good Shot at Breaking Out

Gold has been consolidating for 10 weeks since peaking in April. 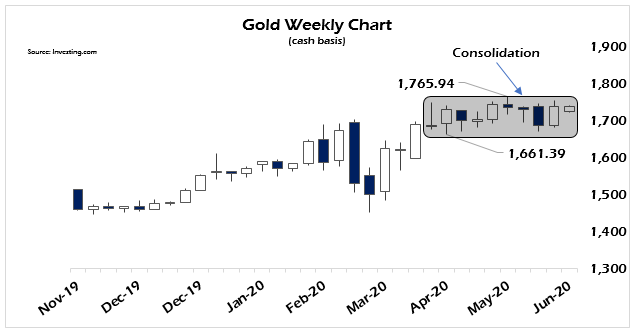 The lack of direction from Brussels, along with the relative hawkishness from the Fed last week, gave gold the energy to bounce and come into this week’s close with a good shot of breaking out of this range next week.

Low-volatility, inside bars on the weekly chart of gold usually imply something big is brewing. The price to watch is the close from the week of May 10: $1,743.00. Gold hasn’t been able to capture and hold that level in the past six weeks. So a close above that on a daily basis is your early warning signal that an assault to the top of the range, $1,765.94, is possible.

With futures premiums over the cash market blowing back out above $10, this says there is some worry in the market that delivery on the expiring June contract could be troublesome for the COMEX.

Physical demand for gold is incredibly high and the longer prices stay in this consolidation range, the more likely we’re going to get an explosion to the upside.

And it will happen, as I’ve been saying for months now, on a perceived safe-haven trade where gold is coupled with the U.S. dollar, stocks and even Treasurys if there is turmoil and unrest in emerging markets and Europe.

All other safe-haven assets are complying with this analysis as the euro sells off, except for bitcoin (BTC), which is still languishing below $9,400, dead center of its noisy consolidation range.

U.S. stocks avoided an ugly reversal after last week’s horrific post-FOMC session, where the Dow Jones Industrials dropped 1,861 points. With all of this occurring on a quad-witching day — where anything is possible — underscores that there are tensions building within these markets that we need to be acutely aware of.

We haven’t seen the full effect of the COVID-19 lockdown on balance sheets, especially of governments. As we approach the end of Q2 there will be a lot of desire to hold things in their current ranges, but with the internal energy getting ready to explode once Q3 starts.

This is why gold holding up so well here, almost independent of the dollar, is so interesting.

And it’s why watching the political maneuverings in Europe is so very important. Europe needs a change and it looks like it will eventually be dragged into it, kicking and screaming all the way.

The Bull & the Bear: Choke Up on the Bat for Profits on Short-Term Options